Unholy alliance is a template for using hate to win

Houston voters voted to repeal the Houston Equal Rights Ordinance (HERO). The vote makes Houston one of the largest metropolitan areas without an ordinance banning discrimination on the basis of sexual orientation and gender identity. Texas’ major cities like Dallas, Austin, Forth Worth, Plano, and San Antonio all have that protection.

Frank Luntz, the Republican wordsmither who has the ability to use words to lie without seeming to, should be proud of his disciples in Houston, Texas. They have effectively followed his teachings and convinced an otherwise tolerant city to act like a typical intolerant conservative Right Wing southern town.

The ordinance’s definition of sexual orientation as “the actual or perceived status of a person with respect to his or her sexuality” is the entry the Right Wing Southern Religious Complex used as an entrance to pervert the ordinance. They called it the ‘bathroom ordinance’ and created ads to instill fear in women claiming that men could simply say they are women to enter women restrooms. Many ads featured a little girl in the restroom with a man approaching as a predator.

Because of lazy local reporting, there were several issues that were not made very clear. Similar ordinances are found in all major Texas cities that simply prove the ads wrong. There are laws on the books that prevent anyone from entering a restroom to do anything other than use the facilities for its purpose. Repeal of this law could have an adverse effect on the cities economy as corporations move their business elsewhere or fail to come to the city. Media Matters said it best.

HERO’s opponents won a stunning victory, turning public opinion dramatically against a relatively popular ordinance. That victory is thanks in part to local media’s abysmal coverage of the fight over HERO, which was plagued by the widely-debunked myth that the ordinance would allow sexual predators to sneak into women’s restrooms by pretending to be transgender — a bogus talking point championed by HERO’s opponents. 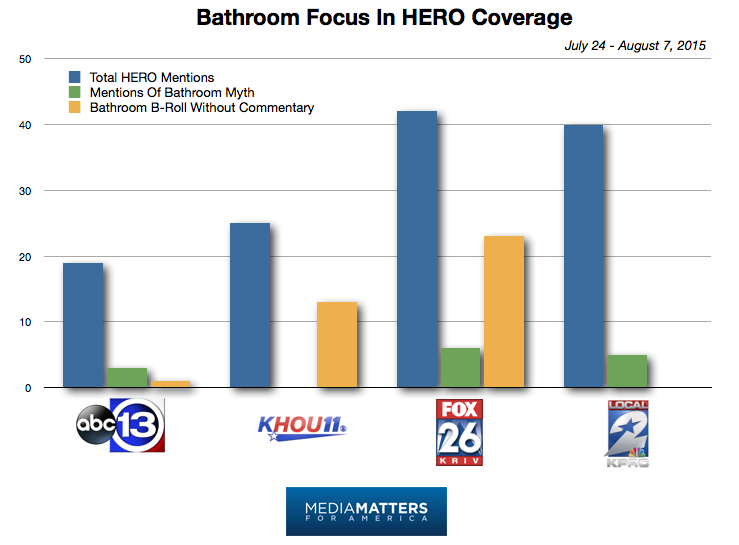 Local media also depicted HERO as an LGBT non-discrimination law, rarely mentioning that HERO prohibits discrimination on 15 characteristics including race, gender, and familial status — characteristics that are statistically more likely to need HERO’s protections. Houston Fox and CBS affiliates went the extra mile of making it a practice to included B-roll footage (scene setting video shown during a news report) of bathroom signs during their HERO coverage. Fox 26’s HERO reporting was particularly egregious, with the network’s reporters themselves buying into the myth.

There is another story that must be told. Houston is a very diverse city. It is a majority-minority city. As such there is a very large percentage of the population that understands discrimination. An ordinance like HERO should have no problem passing.

While HERO was defeated by a 61 to 39% margin, in predominantly black districts it was defeated by a 72% to 28% margin. It is expected that those who have not been discriminated against and have displayed little empathy for the plight of the poor, disenfranchised, or the other, would willfully allow themselves to believe the anti-HERO perverted ads. For those who have been discriminated against it requires something deeper, something more profound.

There was a very unholy alliance that occurred. A sect of Black preachers allowed themselves to be co-opted by The Right Wing Religious Complex. They appeared on television at well advertised press conferences to influence their pews. The local stations were eager to carry. Ratings anyone?

This sect of Black preachers influenced a community well versed as the recipient of hate and fear to hate and fear.  And they were effective. I had black callers on one of the KPFT Radio shows I am a part of articulate rather disturbing views about HERO and a level of hate for ‘trans’. This was all based on what the Right Wing Religious Complex along with their appendage of convenience, a sect of Black preachers, were promoting.

Sadly, there are repercussions beyond the repeal of HERO for many. For Houston, it is the perception that it is sliding into intolerance. That perception has commercial implications as it will likely slow down the types of progressive companies that would relocate here. For the Black community, it shows that they can be as intolerant as those they rightfully accuse as intolerant.