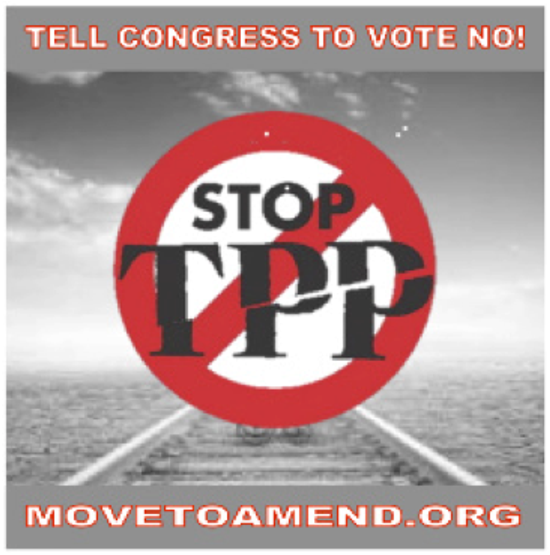 Although numerous organizations and individuals numbering in the hundreds of thousands have expressed their opposition to the TPP, a deal was reached on October 5 and the full details released on November 5.

Negotiated in secret among trade representatives for 12 nations and over 500 multinational corporations, this agreement will affect over 40% of the global economy — yet is completely removed from any semblance of a democratic process.

Once the formalities are achieved, and the president announces he will sign, the deal becomes public and Congress has 60 days to vote it up or down—no amendments. Washington insiders believe the earliest the deal can move forward is April 2016.

If you believe that this is a done deal, you couldn’t be more wrong. Now that industry experts and stakeholders (corporations, small business, NGOs and individuals) are dissecting its contents, keeping a majority of 435 House members and 100 senators together to pass the TPP will be no easy feat.

Tell your members of Congress to vote NO on the Trans-Pacific Partnership!

The inevitably of this deal is not guaranteed, especially in context of the 2016 election cycle, where every House member is up for re-election, along with 34 Senate seats and the presidency. The Republicans are in no mood to give Obama and the Democrats a win in the heat of the primary season, and with most public opposition to the TPP found among those leaning left, the Democrats, which delivered Fast Track, are far more likely to abandon their lukewarm support for Obama’s deal in order to save their own skins in the ballot box.

Hoping this will fail is not enough though. On occasion, Congress will act in the best interest of ‘We the People’–and this is definitely one of those times, but only if we demand it.

Tell your members of Congress to vote NO on the Trans-Pacific Partnership!

Congress needs to hear a constant drumbeat from the millions of Americans who oppose this deal until the cacophony is so loud, they can only vote NO! Move to Amend is among the many organizations demanding a no vote. All of us working together can stop the TPP! Contact your Congress members today! 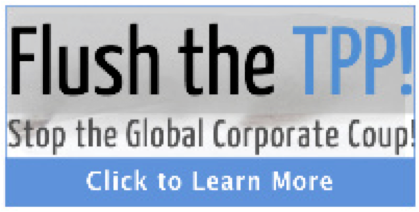 Stopping the TPP is high priority, and there are other ways to get involved:

Move to Amend Board of Directors

P.S. Beyond all that is wrong with the TPP, its passage would further complicate our work and further enshrine corporate rule. We’re asking all Move to Amend supporters to contact Congress right away