This powder keg must be mitigated 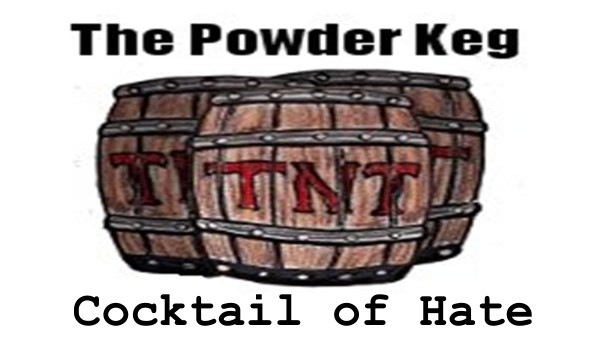 It is first necessary to understand the pathology of the leaders of the Right Wing. They are very intelligent. Moreover, they know exactly what they are doing. They understand that the policies they support are anathema to a society with a vibrant middle-class. They know that an educated populace is a clear and present danger for their existence. They know that an educated population will  find their existence untenable. But they also know that one’s primitive fear sensors, those sensors meant to maintain life itself are much more powerful than educated calculated logic, henceforth their modus operandi.

Essence’s political blogger Charles Pierce wrote a probing article titled “The Powder Keg” that laid out one aspect of America’s Right Wing induced heartburn. He subtitled the article “The seething racial resentment of the Obama era is of an altogether different kind” which made the article a bit limiting.

The ultimate premise of Pierce’s article was that America’s angst is being caused by the false belief of white people that they are falling behind or are the victims of reverse racism. Of course in every quantifiable statistic from health to income to wealth and much more, whites continue to be better off in the aggregate.

Charles Pierce pointed out a snippet from an article about the beliefs of a large percentage of white people.

​You will note that the reporter above presents a welter of empirical evidence that what half of white Americans believe—that they are the primary victims of racial discrimination—is utter bollocks. You also will note that this does not matter a damn to the half of white Americans who believe it. Why should they? For the past 60 years, as a result of the gains made by the Civil Rights Movement, they have been fed this line by people and by politicians who have profited handsomely from the dark energy of racial reaction. They all have discovered uncles who lost jobs with the county road crew because of affirmative action, or nephews who didn’t get into law school because of a “quota.”

Pierce then writes a chilling few sentences that may explain why police violence on minorities are met with such disregard by the majority population, the population feeling aggrieved, if even falsely.

If the dynamics in the country was solely white people feeling privilege and supremacy losing angst, that could be mitigated with education. Others gaining access, rights, equality, justice, humanity and the permutations thereof do not diminish those who already have it. But for those pilfering the masses, it presents an irrational but perfect scapegoat.

AIDS was brought under control by forcing it to fight on many fronts for survival, henceforth the cocktail. The leaders of the Right Wing are well aware of that.

Racism has always been a tool for the powerful as the population at large executed that evil for the gain of a few. As one becomes more educated, as one lives in a more mobile and integrated society, racism by itself becomes an ineffective tool. The leaders of the Right Wing know this. For this reason they provide a cocktail of hate.

The leaders of the Right Wing must be constantly exposed. But most importantly those who have not yet gotten their disease must be inoculated. Inoculation involves exposing them to the Right Wing’s venom along with education. For those already infected, some can only be managed with continuous therapy of knocking down their current fears. For some of the infected, a heavy doses of political penicillin, educated logic, will eradicate the disease.

Eradication of ingrained falsehoods is not easy. It requires a lot of one on one engagement. To many that will be difficult but necessary. Moreover it requires that one engages with compassion. It requires that the enlightened stop preaching to the choir but that one enters uncomfortable territory. That is where change occurs. That is how we destroy the powder keg with the cocktail of hate with a cocktail of education.