Does this purport the revolution Bernie Sanders has been trying to will?

Most pundits, many Bernie Sanders supports, and voters in general believe Bernie Sanders does not stand a chance of winning the Democratic Primary let alone the general presidential election. Many sense otherwise.

Western Illinois University has held 3 mock presidential elections since 1975, and each election they’ve accurately predicted the winner, even though Jimmy Carter and Barack Obama were surprises.

In other years, the students chose the correct Party (without the full mock election). And in 2011, it seems they predicted the Romney/Ryan ticket long before it was expected.

This is a college exercise meant to teach students about the election process. It is not a scientific poll.

From the Bern Report,

History of the Mock Presidential Election: This simulation always takes place the year before the presidential election year, and three months before the actual Iowa caucuses. The genesis of this mock presidential election began at the University of Iowa in 1975 with two political science doctoral students, John Hemingway and Rick Hardy. In that year, students selected Jimmy Carter over Gerald Ford—long before anyone really knew of Jimmy Carter. In the years that followed, Rick Hardy expanded the format and engaged thousands of students at the University of Missouri-Columbia where students registered a perfect record of selecting the subsequent winning presidential party. In 2007 and 2011, Hardy and Hemingway teamed up again to conduct a massive campus-wide simulation at Western Illinois University. In 2007, Western students selected Barack Obama as president at a time when no one thought he could win! And, in 2011, students narrowly re-elected President Obama over the GOP ticket of Mitt Romney and Paul Ryan!

What is interesting is that the mock election shows Bernie Sanders winning in a landslide. 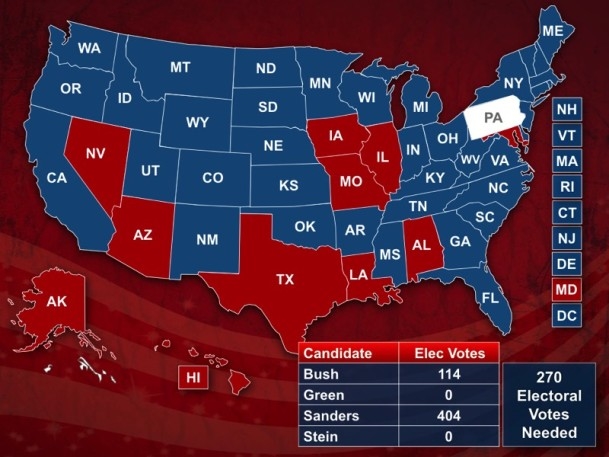 I believe Bernie Sanders can only win in a landslide. Why? Because to elect someone who will be demonized as a "Socialist" will require a mass change in perception. That change will likely occur across demographics and ideologies as people throw their hands up into the air in desperation. They tried Obama after the economic collapse. While he brought us from the brink, the middle-class continues to struggle under unfettered capitalism. Maybe it is time to try something else.