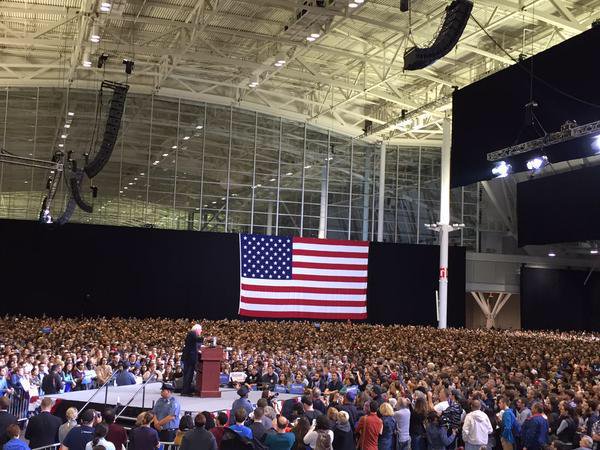 The Fairness & Accuracy In Reporting (FAIR) article below is very important. It illustrates how reporting from the so called traditional mainstream media can create an alternate state of reality. The coverage of Bernie Sanders is not only lacking but comparatively misleading.

The building…holds 8,000 people, and local officials were estimating that it was filled to capacity or beyond. That is a MASSIVE amount of people — especially considering that the high temperature in Lowell yesterday was 29 degrees and Trump’s rally didn’t start until the evening.

Before I get to the real point, let me note that 29 degrees in Massachusetts in January is not particularly cold—the average January temperature in Lowell is24 degrees—and January is generally when the presidential primaries really get going, so the temperature does not really add to the remarkableness of people going to see Donald Trump at an indoor arena.

But the bigger issue is that this “MASSIVE” turnout for Trump a month before the primary is not even half the size of the crowd Bernie Sanders attracted in the same general area three months ago. As the Boston Globe (10/3/15) reported:

Sanders addressed a near-capacity crowd of 20,000 at the Boston Convention and Exhibition Center, with a few thousand more watching a feed of his address while on Lawn on D. Hoping to secure a good spot at the event, people formed a line that stretched a half-mile down Summer Street, nearly reaching South Station two hours before the event began.

And Cillizza knows this, because he wrote about it at the time (10/5/15)—even employing more all-caps excitement (and another odd weather reference):

TWICE AS MANY PEOPLE CAME TO SEE BERNIE SANDERS ON A CHILLY OCTOBER DAY IN 2015 THAN DID THE SAME FOR BARACK OBAMA IN 2007.

The headline of Cillizza’s Sanders crowd piece is: “20,000 People Came to See Bernie Sanders in Boston. Why Aren’t We Talking More About It?” That’s a good question. Like, why aren’t we talking about it when we’re getting excited three months later about Trump drawing 60 percent fewer people?

I guess the answer to that is implicit in a piece Cillizza posted a little more than a week later (10/14/15), headlined “Why Bernie Sanders Isn’t Going to Be President, in Five Words.” The five words, if you’re wondering, are “I am a democratic socialist.” And that makes you ineligible to be president, in Cillizza’s view, since only 3 in 10 people say they have a favorable opinion of socialismand 61 percent express an unfavorable opinion of it.

As it happens, those were almost exactly the favorable/unfavorable numbers for the Republican Party the last time CBS polled about it (10/4-8/15)—32 percent favorable, 59 percent unfavorable—but nobody says that means it’s impossible for a Republican to be elected president.

The beyond-the-pale status of “socialism” does mean, however, that Sanders comes up in relation to Trump’s crowd numbers only as a reason not to get too excited about Trump’s crowd numbers: “After all,” writes Cillizza (1/5/16), “if crowd size at rallies was determinative, Bernie Sanders, not Hillary Clinton, would be the heavy favorite to be the Democratic presidential nominee.”

P.S. To get a sense of how badly Cillizza wants to hype the Trump crowd, check out this second Twitter photo he posted, from the Lowell Sun‘s Rick Sobey:

The line to get in for Trump stretches to the Post Office #TrumpInLowell pic.twitter.com/ndap2g82Ue

Take a close look at that photo. I count maybe 33 people in it. I have no doubt there was a longish line to get into the 8,000-seat arena, but you could take a photo of 33 people standing in line to see John Kasich.