Even as he fires Rick Tyler, his communications director, Ted Cruz leaves the door open that anyone listening to the interview may think the tweet could be true. How did it it all start?

Marco Rubio  was walking in the lobby of the Columbia Hampton Inn and came into contact with Ted Cruz’s father and a Cruz staffer. DP Politics said they heard the following in the video.

Marco Rubio: Got a good book there?

Marco Rubio: Not many answers in it. Especially in that one.

That is definitely not what I heard. Listen for yourself.

Anyhow, Rick Tyler soon after tweeted the following. “Watch Marco Rubio’s awkward remark about the book a Cruz staffer was reading in the hotel lobby. What book was it? http://shar.es/14Ml7Z” The link is to the DP Politics likely false story of the interpretation of the tape. In other words, dirty politics. 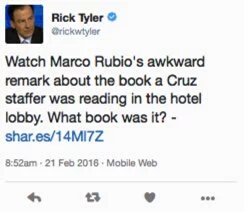 A few hours after the tweet, Rick Tyler is now a fired communications director. It is amazing how many professionals are losing their jobs over mindless tweets. It seems they never learn.

Ironically even as Ted Cruz was giving the news conference where he announced the firing of Rick Tyler, he still allowed one to take away the notion that it is not about the the story being false but instead about tweeting such a story.

“It turned out the news story he sent around was false. But I tell you, even if it was true, we are not a campaign that is going to question the faith of another candidate,” Ted Cruz said. “Even if it was true, our campaign should not have said it. That’s why I have asked for Rick Tyler’s resignation.”

Is there any doubt about Ted Cruz’s double talk? Note the construct. The story was false. But he left enough nuance in there.