Lawrence O'Donnell does what all journalist should have been doing instead of just promoting the misinformation by the campaigns. Bernie Sanders points out that of the 50 state, Vermont provides the fewest guns used in crimes in other states.

O'Donnell wonders why Hillary Clinton's handlers directed her to make provably misleading statements about the impact of guns purchased in Vermont over crime in New York. He played a clip of Clinton stating the following.

"He frequently says, 'Well I represent Vermont. It is a small rural state. We have no gun laws.'," said Hillary Clinton. "Here is what I want you to know. Most of the guns that are used in crimes and violence and killings in New York come from out of state. And the state that has the highest per capita number of those guns that end up committing crimes in New York come from Vermont."

Lawrence O'Donnell responded with the facts. The following chart tells the story. 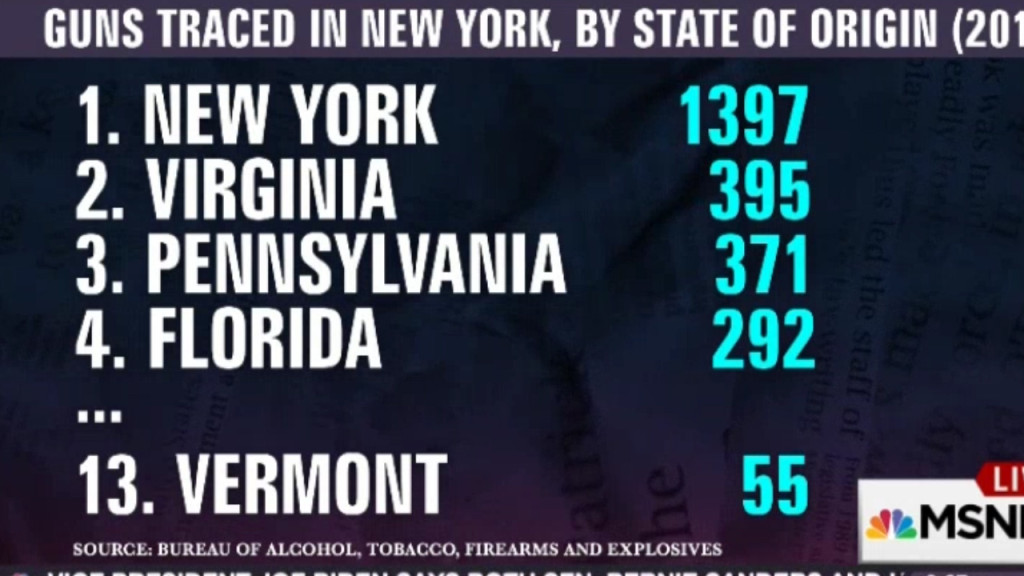 What Hillary Clinton said is likely not technically a lie. What it infers for those listening is, in fact, a lie. Her intent is to have one believe that guns from Vermont have an inordinate effect on gun crime in New York. That is patently false.

Lawrence O'Donnell perfectly debunked Clinton's myth. This type of shady use of statistics provides a classic example why voters do not trust Clinton. She is savvy enough not to lie outrightly. She measures her words. For the less informed or those without the ability to research are the ability to 'stay in the game,' fact checking her is a burden that most won't do. And that includes most in the mainstream media.

The problem Hillary Clinton has is that the America Bernie Sanders is selling is much more attractive than what she is offering. Just like the Right must lie to the citizenry for them to buy their defective product, so must Hillary for her less than optimal product.