Thousands participated in the 2016 Democracy Spring with over 900 people arrested. Mainstream media dedicated at best a few seconds of coverage for real demands for democracy. In fact, two organizations that I am a part of, Move to Amend and Coffee Party USA, had various representatives participating in the marches, rallies, and sit-ins as well.

If it were not for online networks like The Young Turks and social media, the event would have been virtually ignored. In fact, that is how I spotted an old friend. While perusing my Facebook feed, I saw a meme with Lady Liberty getting arrested. But wait. I told myself. I know that face. And yes, it was Kaja Rebane. We worked on a presentation at the Democracy Convention in Madison a few years ago.

I pinged her and asked her to give me her perspective on the event. Kaja is a devout movement activist. Her Lady Liberty costume was entirely self-made. The image of Lady Liberty getting arrested was the perfect metaphor describing the loss of real liberty and democracy afflicting the poor and middle-class America. 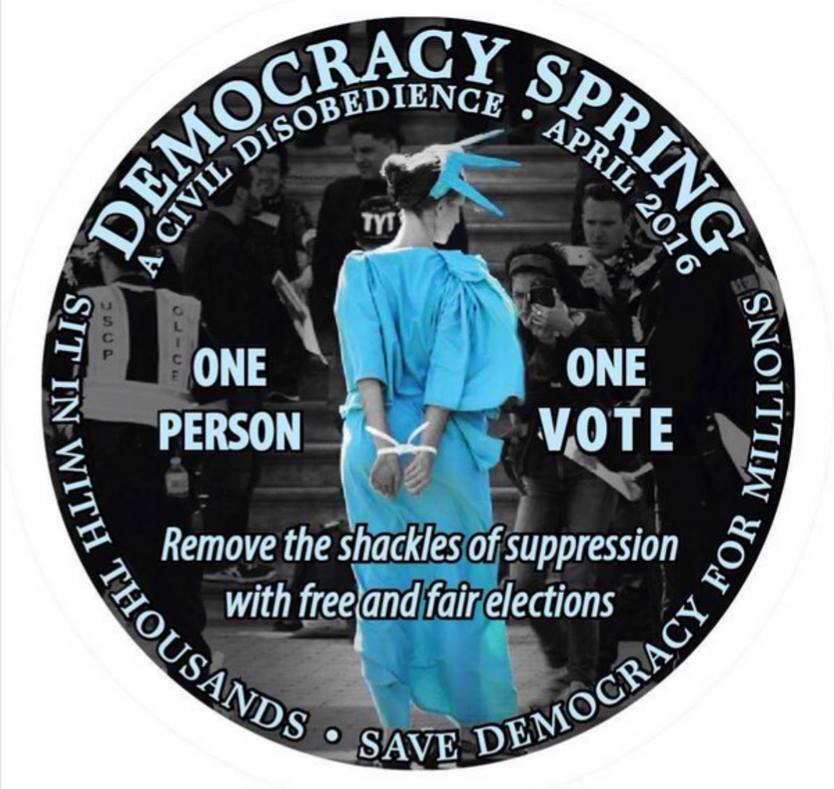 This spring, in the heart of the primary season, as the national election begins to take center stage, Americans of all ages, faiths, political perspectives, and walks of life will bring the popular cry for change to Washington in a way that’s impossible to ignore: with nonviolent civil disobedience on a historic scale.

We will demand that Congress listen to the People and take immediate action to save our democracy. And we won’t leave until they do — or until they send thousands of us to jail, along with the unmistakable message that our country needs a new Congress, one that that will end the legalized corruption of our democracy and ensure that every American has an equal voice in government.

With hundreds of patriotic Americans being sent to jail, day after day for at least a week simply for sitting in to save our democracy— the drama in Washington will rock the business-as-usual cycle of this election and catapult this critical issue onto center stage. We will focus the nation’s attention as never before on the urgency of this crisis, the existence of solutions to it, and the strength of the popular demand to enact them. We will make this election a referendum on whether our democracy should belong to the People as a whole or to the billionaire class alone.

That’s a referendum we can win, setting the stage to achieve fundamental reform that will give us — finally — the democracy for all we were promised.

Kaja pointed out that over 400 people were arrested on the day she got arrested. That was the largest mass arrest on any one day in Washington DC. She explained that the protesters were urging the passage of four bills in Congress that would begin addressing the money-in-politics cancer afflicting the country. I don’t think Democracy Spring single-handedly is going to fix all of our problems,” Kaja Rebane said. “But I think it is playing an important role.”

Indeed, even with minimal MSM coverage, Democracy Spring made a difference that will be felt for some time to come. It opened a new group of young people to the activist realm. That is what it will take to foster real change.