Many Bernie Sanders supporters were depressed after Hillary Clinton won four out of five primaries in the Northeast. They need not be. The political revolution has not materialized. It is materializing.

Hillary Clinton has not won yet but absent a complete meltdown on her party, self-inflicted or otherwise, she will be the Democratic nominee. Math is absolute. Those who believe in real democracy, one person one vote, should not try to impose a different will on the majority. That would be hypocritical.

It is clear that many believe that some who voted for Secretary Clinton were misled or misinformed. Guess what. Many Hillary Clinton supporters feel the same way about Bernie Sanders supporters.

When the day is over, win or lose, both Bernie and Hillary will be fine. All must remember the average supporter is just that, a supporter in a sea of supporters that ultimately means little to the individual candidates. We should carry no personal baggage for either candidate. 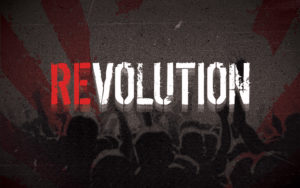 It is the job of those who believe that America needs a revolutionary change, to convince those who think differently to reevaluate their positions. This has to be done by developing mutual respect between parties. Both parties must stop talking past each other and speak to each other.Last week I posted a conversation I had on my radio show with a co-founder of Bernie or Bust. We had a positive dialogue on air. A DailyKOS reader sent me the following email.

eggberto, f$ck off. I don't need any Bernie of Bust movement to have already decided that I cannot vote for Hillary Clinton under any circumstances. This lesser-evil crap has to stop. Stop telling me that, when the majority of people in both parties are lazy numbskulls, not paying attention to the corruption of each party's establishment candidates (yep, HRC is as corrupt as they come), ignoring a historic opportunity to vote for an honest consistent principled effective leader like Sen. Sanders, and instead engaging in tepid personality politics, that I then have to choose between the piss candidate and the sh$t candidate that the party duopoly puts up in the general election.

The problem for Democrats is that too many overprivileged and ignorant people are willingly blind to HRC's many many many negatives and that on balance she's already done more harm than good for most people. And most of the good deeds she takes credit for were no-brainers that any public official would have done - money to rebuild NY after 911? Like there wouldn't have been money to rebuild lower Manhattan if Hillary "Joan of Arc" Clinton hadn't been NY Senator at the time? - gimme a break; the money would have been there for NY even if YOU had been the Senator.

First woman as President? Right time, WRONG WOMAN, being shoved down our throats.

"I, however, admonished him for the stance of his movement which is dangerous for many poor and middle-class Americans."

Admonish yourself you egotistical prick. Who the f$ck are you to presume to admonish anyone about how they want to vote.

When will people get it through their heads that HRC doesn't give a turd about poor and middle-class Americans any more than any Republican candidates?

Get your head out of your a$$.

I replied to the person who sent the email as follows.

The tone of your email sent to me is probative. You do not convince those we need to convincing by exhibiting the acrimony you show. If we want to change people we have to do the hard job of earning people’s respect and trust even if you think they are dumb, and you are a genius. Once that is done, they will be willing to listen. Yes. It is slow and tedious. The new indoctrination by the Right started methodically with the Powell Manifesto. It was a job well done. We have a lot of work. I can take the verbal abuse that you just gave me. I’ve got a thick skin, and I always keep my eye on the ball. Most cannot take it however, and as such your anger will accomplish nothing. If we are unable to convince people to vote for Bernie, not voting for Hillary in the general will feel good, but it is a fact that more people will get hurt by that move.

I am taking the time to respond to an otherwise uncivil email, urging you and those in your sphere not to just think through one level, but through the dominos of outcomes. IMHO, we need you engaged not just during the election but after so that we prep and educate for the next.