Larissa Martinez and Mayte Lara Ibarra were the valedictorians in McKinney and Austin, Texas respectively.

Valedictorians Larissa Martinez and Mayte Lara Ibarra both came out as dreamers in a very public manner during the end of their high school careers. Editor-in-Chief Jaime Rodriguez of Tapia Magazine published by Rice University's Tapia Center brought the two young valedictorians to Houston for a panel discussion.

After the panel discussion, I sat down with Jaime, Larissa, and Mayte for an interview. It was a fascinating interview from two bright young ladies with their eyes on continued success.

Mayte started a firestorm when she tweeted the following. I said, Valedictorian, 4.5GPA, full tuition paid for at UT, 13 cords/medals, nice legs, oh and I'm undocumented. This tweet was but a little bragging by a young woman who accomplished much even with the headwinds of income and immigration status.

NBCNews reported the story as follows.

A young valedictorian from Texas has stirred controversy after she tweeted that she will be attending the University of Texas-Austin with a full scholarship and that she is undocumented. Mayte Lara Ibarra, a graduate of Crockett High School in Austin, Texas, tweeted photos of herself after graduation and mentioned her 4.5 GPA, her 13 cords and medals and her immigration status. 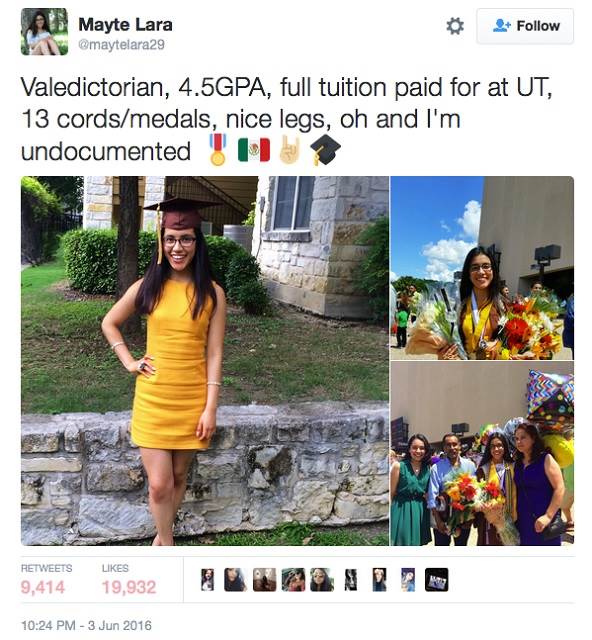 Mayte's tweet received over 9,000 retweets and nearly 20,000 likes. She deactivated her account after she received many negative comments.

Larissa Martinez gave a bold valedictorian speech. She told a shocked but supported audience that she is an undocumented immigrant. 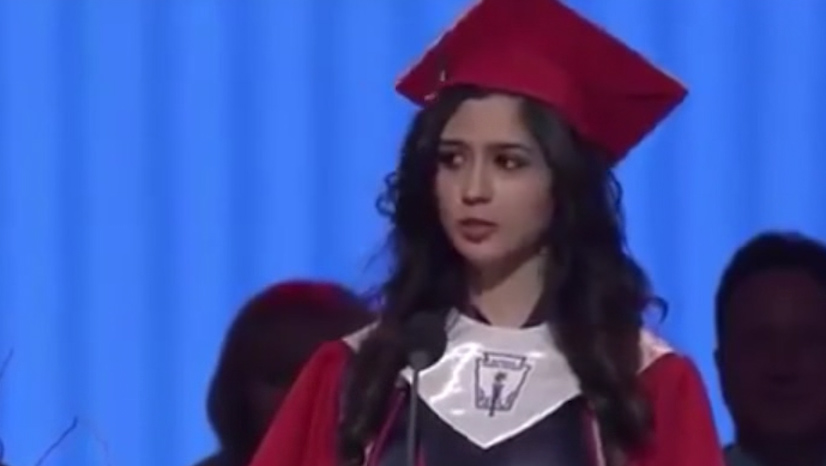 WFAA reported it as follows.

McKINNEY, Texas -- There is no easy way to prepare for what Larissa Martinez did last week. The valedictorian at McKinney Boyd High School crafted her words and sentences carefully before making the speech at her graduation. "Now I have to stand up there, in front of all those people," she said. Martinez held a 4.95 GPA and took 17 AP classes over her high school career. She's also an undocumented immigrant. "A part of me feels like I was meant to do this," Martinez said about her graduation speech. The speech would take hours to put together. The family lives in a humble, one-bedroom apartment in McKinney. Larissa read her speech out loud to her mother, Deyanira Contreras. "[Larissa] said, 'What do you think?' And then I realized, that's what we are. That's what you are... That's your story," her mom said.

For many undocumented immigrants it is about survival

Mayte came to America at a very young age. She was only three years old when her parents emigrated from Guanajuato. She was taken aback by the negative response to her tweet. She was particularly upset by those who told her to go back to Mexico. After all, she knows little about Mexico. Virtually all of her cognitive life occurred in America.

Mayte points out that she simply could not understand why those with so many opportunities, those without any headwinds to stifle their success, took it for granted.

Larissa came to America at an older age than Mayte. She was thirteen. Her family traveled to America several times over the years to visit family who were U.S. citizens and residents. Larissa said they overstayed their tourist visa after their last visit. No wall can stop that type of emigration. Larissa and her mother settled into a one-bedroom apartment. Even with meager resources and strong headwinds, Larissa excelled.

I asked Larissa and Mayte how would they answer the criticism that their families' move was tantamount to jumping in front of the immigration line. Larissa said she did not have an answer specifically but with a broken immigration system the fight is for policies that support all immigrants.  Mayte's answer was more circumspect. She said it was about survival. To many who came to America, whether the pilgrims or otherwise, it has always been about survival in their reality.