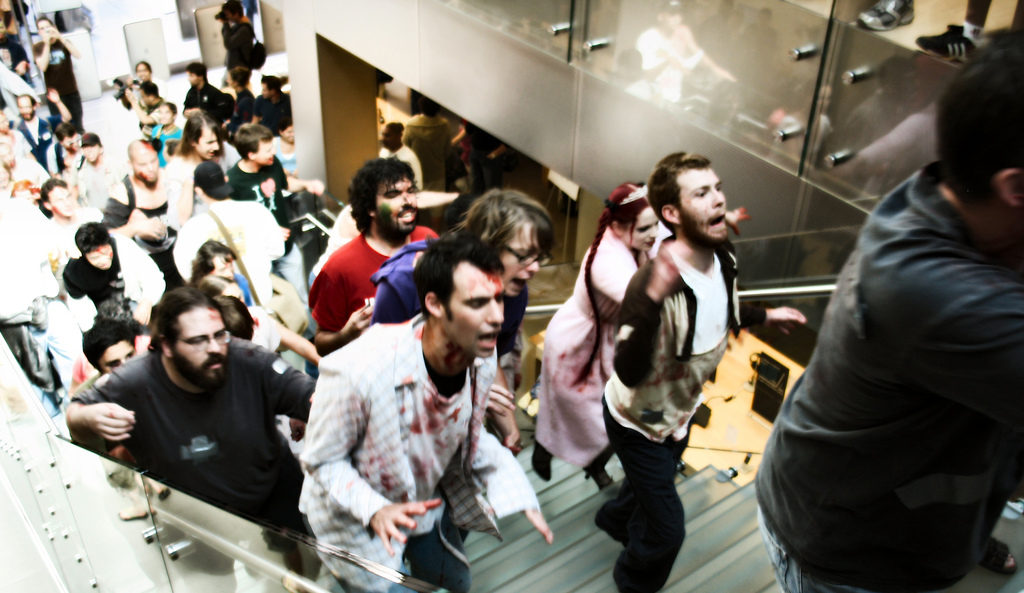 While perusing my feed I came across the following Facebook post from my good friend, Professor Cody Pogue.

Whether it's the 1956 Invasion of the Body Snatchers, The Walking Dead, or any of the numerous zombie movies in between, Americans seem to be frightened of losing themselves. Many characters even choose death over having their mind taken over by some other force.

The irony is that in real life, we hand over ourselves willingly all too often. The downfall of having freedom is that we are given too many choices, most of which are important and play a vital role in our future. This overwhelms us and leads to paralysis. Instead of staying up at night wrestling with the questions of who we are, who we want to be, what we want to do, what we want out of life, and what we want to one day look back on our life and see, we turn our minds over to outside forces like peer pressure, popular culture, tradition, religion, leadership, our employer, a counselor, a celebrity, a parent, a political party, or advertisements. And we let them decide our fate for us.

We, in turn, end up sleepwalking through our lives like zombies, losing ourselves and becoming what other people, entities, or institutions, want us to be. Like the zombies on the Walking Dead, we try to destroy those individuals who remain true to themselves. We become part of a herd, and for all of the benefits that entail, we lose the most important thing, which is ourselves, and at the end of our lives, we are forced to look back and realize that we never truly lived.

It doesn't have to be that way, though. We are still young. We can still examine our lives, stay up at night wrestling with the hard questions, take what tradition, religion, popular culture, and all that the others say with a grain of salt but ultimately be who we are. And we can march to the beat of our own drums, even if that is out of step with everyone else. Isn't it worth it to be able to look back on life and see that we truly did live?

Professor Pogue was on one of his inspirational ventings. But he fundamentally articulates a problem real progressives face. Most Americans want the things afforded by progressive values. Unfortunately, they allow fear affected by the perceived safety of the status quo, conservatism, to doubt or defer progress,  their willingness to fight or demand progress attenuated. The fear of moving forward will only be broken when every American first acknowledges their denied worth and demand what is rightfully theirs. This requires positive dialogue among the masses. It demands that those who are self-empowered show others how to empower themselves.