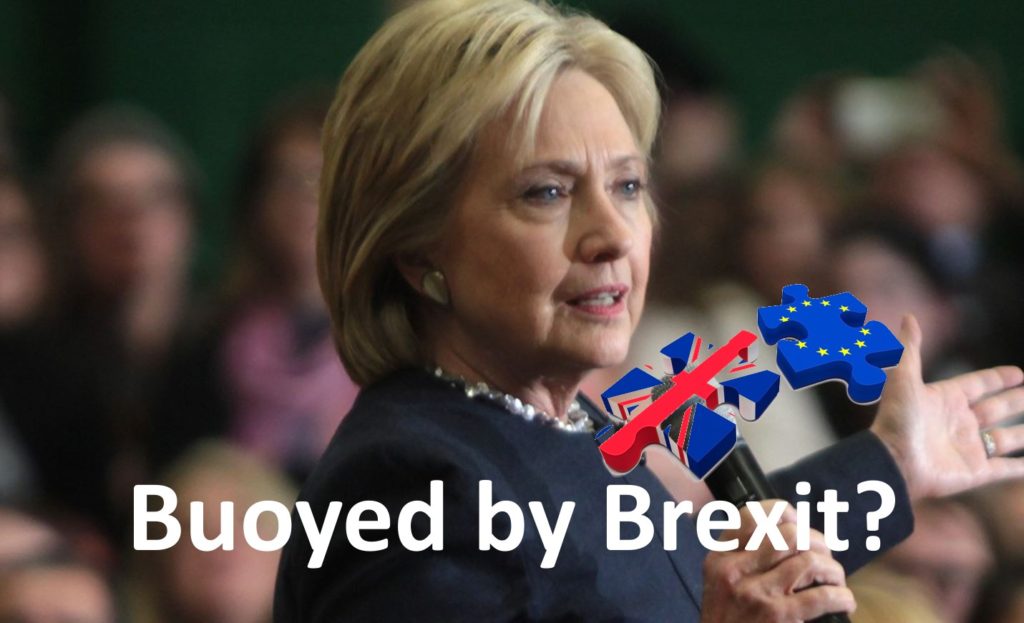 Americans are mad and are tired of voting for change in our binary party system and getting no change. Brexit likely causes Americans to acquiesce once more.

Non-establishment candidates infiltrated each party during this election cycle. Bernie Sanders ran as a Democrat. Donald Trump ran as a Republican. The math isn’t there for Sanders. The math made Donald Trump the nominee.

Trump is decidedly behind in both national polls and battleground state polls. In fact one of the better pollsters, Nate Silver gives Hillary Clinton a 78%/22% advantage over Donald Trump. Polls are good until they aren’t. Many times they aren’t because the polls themselves influence the outcome. Some people stay home because they think their vote will not matter or some who otherwise wouldn’t come out come out to do their part.

Brexit is making quite a few people anxious, Republican and Democrats alike. They know that Donald Trump is unstable. As such they want to make the pragmatic vote.

This morning I came across an interesting blog post in my feed. Kori Schake, a fellow at the Hoover Institution, former director for defense strategy and requirements on the National Security Council staff, and deputy director for policy planning in the State Department of the George W. Bush administration, wrote the following.

Last Friday, people across the United Kingdom woke up shocked to learn that their nation had actually voted to leave the European Union. More than a million people now reportedly would like to change their vote from “leave” to “remain”; more than 3 million signed a petition for a second referendum. EU institutions and major corporations based in London announced they would move operations and jobs from Britain to EU countries.

My reaction was a little different: I decided to endorse Hillary Clinton for president. It wasn’t an easy decision. As a conservative, I find Hillary Clinton stands for the opposite of a number of things I believe strongly: that our government is involved in too many areas of our lives, that its profligacy is spending our country into bankruptcy, and that it very often makes problems worse because it knows too little to keep pace with change. Clinton has a seemingly inexhaustible list of government programs to address every social concern, and no conceivable way to pay for it all.

So, I have deep misgivings about a Clinton presidency, but the anguish of British voters who cast a protest vote thinking it wouldn’t matter — that their vote wouldn’t be decisive — convinced me that something much bigger is at stake in this election. The unthinkable, I realized, was actually possible this year. In the British referendum, major polling firms had the “Remain” vote leading by as much as 8 percent. As little as five hours before results were announced, betting markets gave Remain a 96 percent chance of success. And I realized I didn’t want to wake up on November 9 to find Donald Trump elected president and wish I had done more to prevent it.

Schake pointed out further in the article a list of reasons why Trump is simply not a viable choice for America. It turns out that some conservatives object to a Trump presidency as much as any liberal.

As happened in the UK, sometimes protest votes are consequential especially when the outcome is uncertain. We should all heed Schake’s call, “As little as five hours before results were announced, betting markets gave Remain a 96 percent chance of success. And I realized I didn’t want to wake up on November 9 to find Donald Trump elected president and wish I had done more to prevent it.”