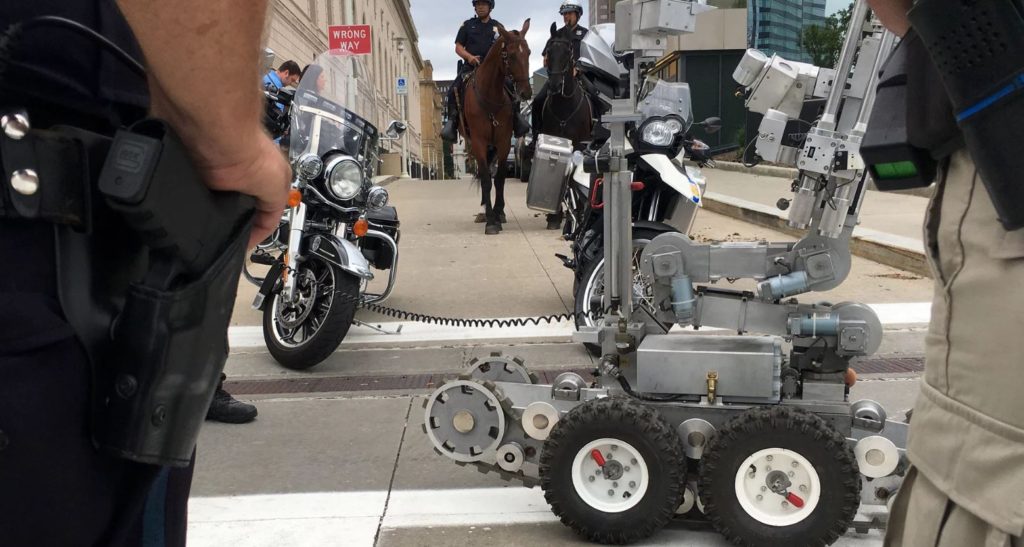 Cleveland officials have expressed concern about the Ohio “open carry” state laws that will allow people to take guns to events organized close to the Republican party convention – but have not given assurances of how they will police the use of guns and banned objects in crowded areas, where the atmosphere is likely to be highly charged.

Guns will not be allowed into the convention itself, which is being held inside the Quicken Loans Arena in Cleveland and policed by the secret service, or inside a tight perimeter immediately surrounding the venue.

But in a broad space outside those inner security rings, near the arena, in a large area loosely known as the event zone, guns will be allowed in an open-carry situation and, with a valid permit, to be carried while concealed.

While guns will be allowed in that zone, toy guns are banned. The city has declared a long list of other items that are prohibited from being taken into the event zone during the convention, which begins on Monday with the GOP readying itself to anoint Donald Trump as its nominee for the White House.

Prohibited items range from glass bottles to lengths of rope and knives, and from tennis balls to lasers, gas masks, sledgehammers and drones, according to a list issued by the Cleveland authorities. Umbrellas with sharp tips are banned. So are pellet guns. But ordinary guns and bullets must be permitted if legally toted, because of an Ohio law that carrying a firearm is not prohibited.

No state license is required to possess a rifle, shotgun or handgun in Ohio, according to the National Rifle Association.

It is not clear, however, how law enforcement will be able to prevent anyone illegally possessing a firearm or carrying a concealed weapon without a valid license from getting close to the convention arena.

A request for comment sent to the Cleveland police department was not immediately returned.

“You cannot just walk up to someone on public property and say ‘you have a firearm, are you legal?’. That infringes your second amendment right in an open carry state,” said Carolyn Robey-Warren, secretary of Ohio Carry, a state firearms advocacy group.

“There would have to be a purpose for that stop. There has to be probable cause. It’s like if you are driving down the road with a tail light out, that’s when law enforcement has every right to stop you, and they ask you for your license and registration. You can’t be stopped for open-carrying a firearm without being a suspect in some way,” she added.

More than 5,000 police officers are expected to be on hand when the Republican convention begins on Monday.

Three hundred police officers on bikes will be patrolling, and a police official said part of their job will be separating potentially hostile groups from one another, according to one report.

The Cleveland police chief, Calvin Williams, said that the sniper attacks in Dallas and other recent events have prompted police to re-examine security procedures in Cleveland, although he would not go into details.

“Dallas was a wake-up call for a lot of people,” he said.

On the subject of open-carry gun laws, Williams said: “This is not the first time the city of Cleveland will see people open carry.”

Asked at a press conference on Wednesday about preparations for the convention if he would prefer that people be prevented from carrying weapons in the vicinity of the event, Williams said, “Of course.”

“Our intent is to follow the law. And if the law says you can have open carry, that’s what it says. Whether I agree with it or not is another issue,” he said.

Vociferous and wildly contrasting groups are expected to hold demonstrations. Not just pro-Trump and anti-Trump groups, but libertarian groups, anti-war groups, civil rights protesters, pro- and anti-abortion groups and any number of other interests are expected to try to make their voices heard outside the convention – with or without personal firearms in holsters or handbags.

“I do not see an issue. Probably I’m naive, but I think everything is going to be well,” said Robey-Warren.