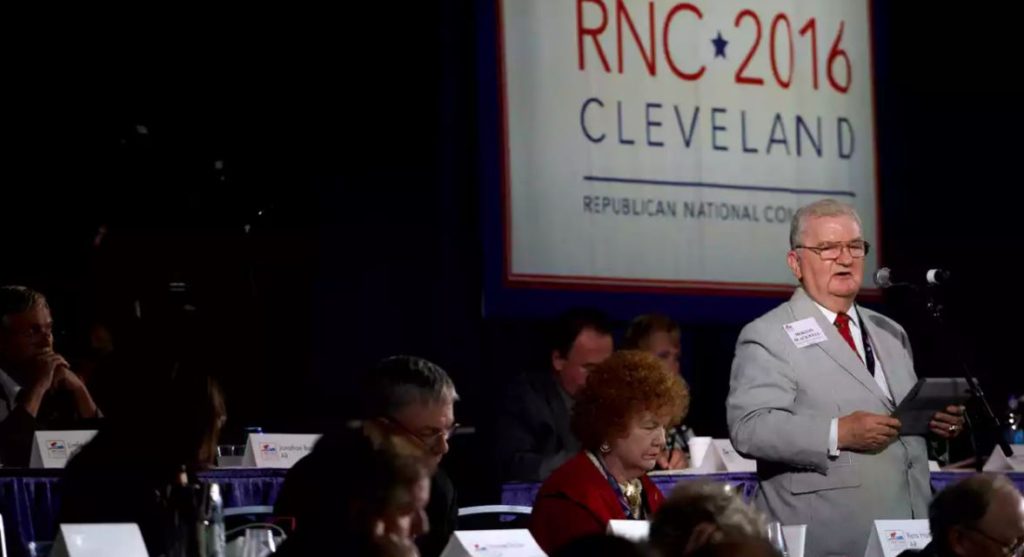 Grassroots conservatives alleged that the Republican National Committee pulled out from a deal to reform RNC rules at the last minute as a potential “floor fight” – a contested vote on the floor – looms over next week’s Republican national convention.

Former Virginia attorney general Ken Cuccinelli, the leader of a bloc of social conservative activists, told reporters on Thursday night that he expected multiple minority reports to proposed rules of the Republican party. Any minority report, which requires the signatures of one-quarter of the rules committee, would automatically be debated and voted upon on the floor of the convention.

Several test votes on the rules committee demonstrated that there was sufficient support for a minority report. Twenty-eight members are needed to sign on to a minority report, and 32 indicated their support for a key priority of Cuccinelli and his allies to award “bonus delegates” for states that held closed presidential primaries, open only to registered Republicans.

Cuccinelli, who previously led the delegate-counting efforts for Ted Cruz’s presidential campaign before the Texas senator dropped out, said “sincere efforts were made by RNC and Trump people and coalition of grassroots conservatives to come to agreement to make the party run better for the grassroots”. However, Cuccinelli added: “This morning after a deal had been tentatively reached the RNC pulled out of it.” The 2013 Republican nominee for governor of Virginia insisted that he had only decided to speak to reporters about it in order to correct what he described as inaccurate reporting on the subject.

The prominent conservative activist said that negotiations fell apart on the issue of “bonus delegates”. He said that his alliance of activists and the RNC failed to agree on a mathematical formula in back and forth negotiations.

Cuccinelli said the negotiations involved his conservatives conceding a number of points including any changes to RNC governance, such as a ban on registered lobbyists serving on the RNC.

Sean Spicer, the chief strategist for the RNC, disputed Cuccinelli’s version. He noted, “negotiating isn’t giving in to what everyone wants. There’s a bigger package in play and the RNC wanted to ensure all the sides were represented.” The top GOP operative added that the RNC represented GOP activists from across the country who had elected its members.

He described negotiations as “more of a ping-pong effect, back and forth, so I don’t know, nothing was outright rejected. I think we just got a point where we thought this is futile.” Spicer did note that the RNC held firm on the ban on lobbyists serving on the committee, noting that state parties should be free to decide who they could elect to the national committee.

This conflict is different from the effort by opponents of Donald Trump’s nomination to “unbind delegates” and allow Republican activists to vote for the presidential candidate of their choice without regard to the result of the presidential primary in their state. The topic did not come up in negotiations and Cuccinelli took pains to say “we are not touching the binding issue”.

Instead, it was simply focused on party governance and efforts to reduce the power of the national party and enhance the role of conservative activists in the future.

As a result of the impasse, the RNC’s rule committee is expected to pull late nights on Thursday and Friday working through proposal after proposal to modify the GOP’s rules.