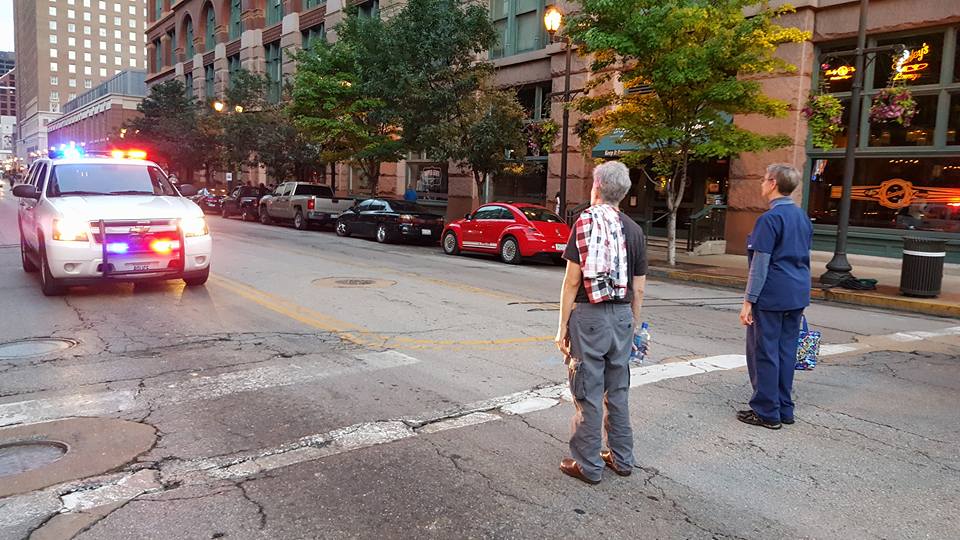 I went to the Netroots Nation 2016 Convention in St. Louis, Missouri last week. I did not know what to expect after the eventful convention held in Phoenix, Arizona.

In 2016 Netroots Nation attendees marched alongside local organizations protesting Sheriff Arpaio’s policies. The reaction of a certain percentage of our fellow liberals to Black Lives Matter (BLM) trying to get the ear of Martin O’Malley and Bernie Sanders was distressing. Many were upset that BLM disrupted a convention of liberals. One person told me that BLM needed to bother Republicans, not Democrats and Liberals.

Many did not get it. You must take care of home first. If Liberals believe in the tenets they espouse –social justice, racial justice, economic justice, equal access to success —  then when any of those tenets goes unmet they should activate. Liberals simply were not listening to the cries of an aggrieved community that felt ally-less. Many liberals were talking the talk but not walking the walk.

I interviewed many who still did not get it. Change is not comfortable. One must leave his or her comfort zone at times if they truly believe in his or her convictions. It is not easy. But this is how change occurs.

After settling in in St. Louis on Wednesday, I met up with some friends to decide our activities for the evening. There was a Black Lives Matter event commemorating Sandra Bland, and other women mowed down by the police. We knew we had to attend the event but was doubtful about the level of participation we would see from Netroots Nation in the aggregate. Suffice it to say; we were pleasantly surprised. A large contingent of attendees was not only there but formed an integral part of the event. They marched to the site of a recent police shooting, participated in speeches, and expressed solidarity. 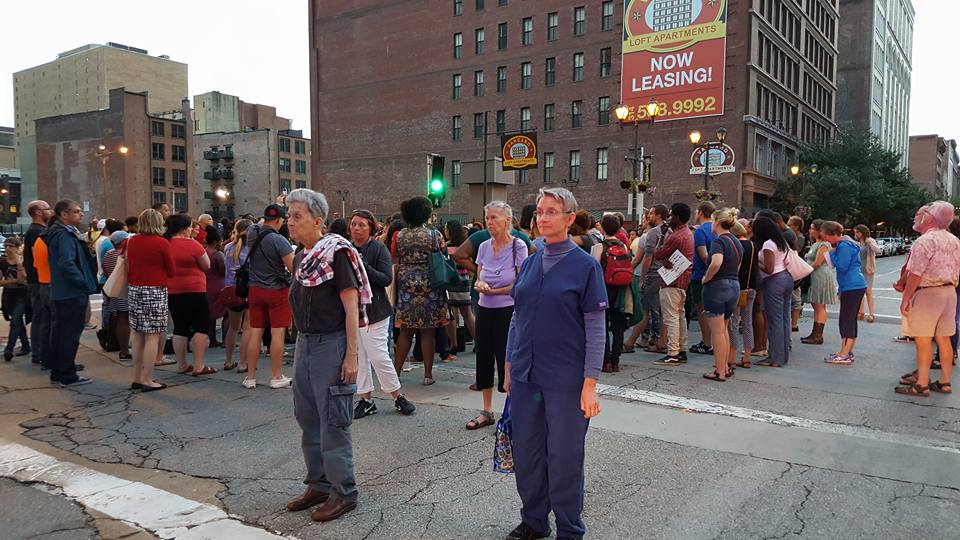 Saturday was the big event. Black Lives Matter sent out notices that there would be a rally at the courthouse. It turns out that the time conflicted with various panels. There was scant Netroots Nation attendance. What did some Black Lives Matter participants do? The disrupted the convention once again. They went into the convention center and admonished many attending panels. Many responded.

As I sat having a quick lunch after visiting the site of Michael Brown’s killing by cop, I saw hundreds of Netroots Nation filing down the main avenue and heading to the courthouse. After getting to the courthouse, the various groups consolidate and marched to the freeway. The intent was simple. Shut down the freeway to inconvenience folks for four and a half minutes as a symbol of Michael Brown’s dead body laying in the sun for four and a half hours.

It was risky. I am not sure how many netizens were willing to risk arrest. It turns out most who rallied did not care. They went onto the freeway to show their solidarity. 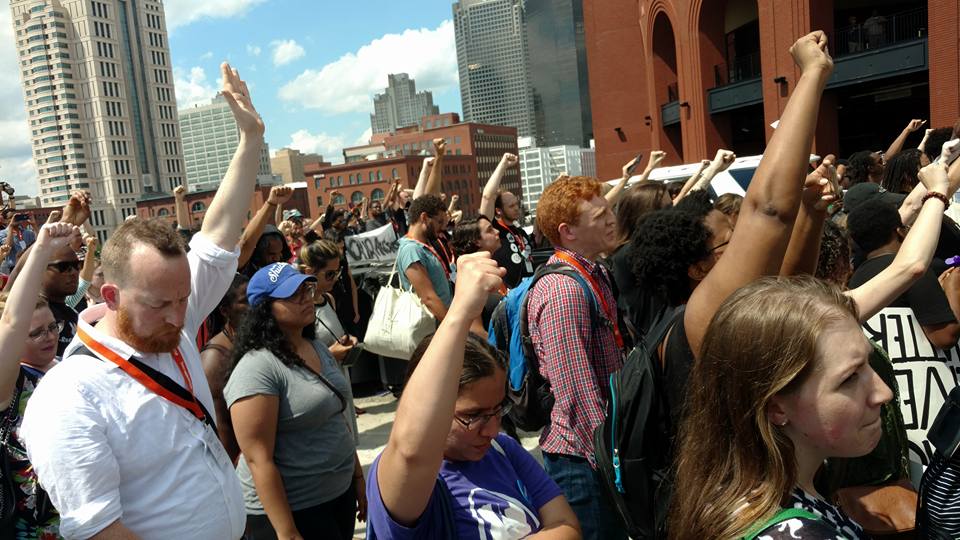 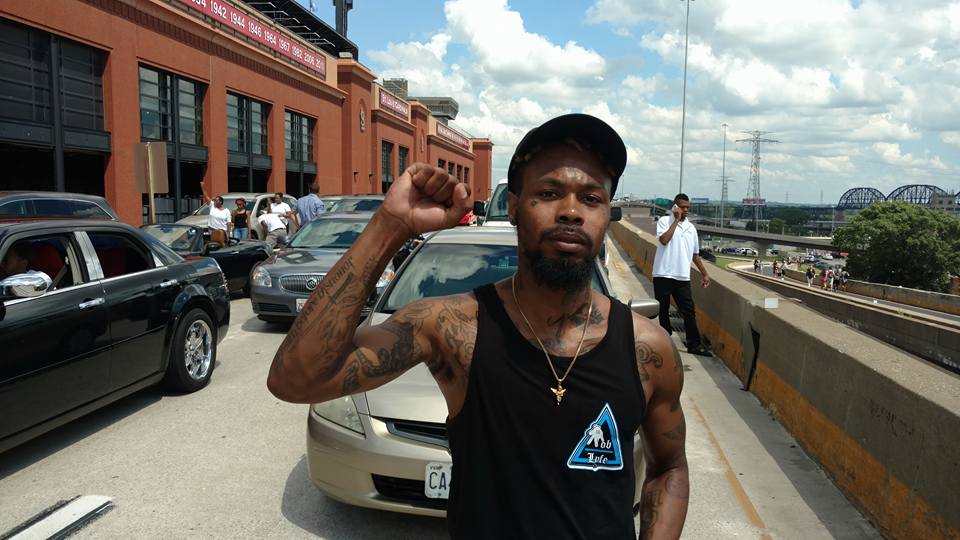 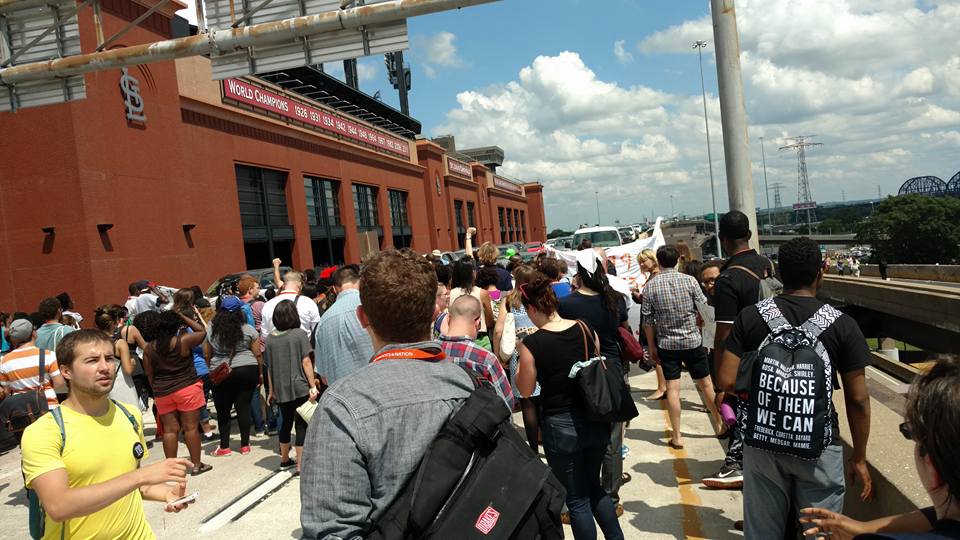 As the march started exiting the freeway, one of the lead BLM organizers stopped the rally. She was likely concerned about the police officers coming up the rant. What occurred next was epic. She called out to the white partners in the group and asked them to come in front of the line. And they populated the front of the line. The intent, the symbolism was that their privilege provided the shield from negative police action against the protest.

Last week I wrote a piece with the provocative title ‘Black Lives Matter needs white bodies‘ at DailyKOS that garnered some interesting comments. The solidarity Netroots Nation showed in St. Louis was a partial instantiation of exactly what the article was about and trying to illustrate.

The rally terminated at the St. Louis Convention Center. BLM gave many speeches but some words stuck out. BLM pointed out that organizations like Netroots Nation typically fly into communities to have their conventions. They support the infrastructure of the few with little involvement in what made the city they are visiting. They pointed out that said modus operandi must be anathema to organizations comprised of Liberals. They told Netroots Nation that while their actions in St. Louis was commendable, it does not end there. It is imperative that as they go to their corners throughout the country that they use their core competencies, the keyboards, or anything else to be agents of change to live up to who they claim to be.