Last week, Governing Magazine released their rankings of state economies in 2016. It is their first release of state economic strength since 2013 when Texas ranked an impressive third among all states. The new rankings, however,downgraded the Texas economy to 21st, a drop of 18 places in just three years.

What happened over those three years?

Certainly, the work ethic and productivity of Texans hasn’t changed.  Texas is still growing, our workforce is young, diverse, and works for less than those in many other states.  And, of course, corporations still get kid glove treatment and big tax breaks.

And while the price of oil has dropped resulting in an industry slowdown and layoffs; ups and downs in oil prices are nothing new.  The Texas economy is larger and more diverse than ever.

The big change – and a fair place to look first when assigning responsibility for Texas losing ground compared to other states – is the election of Greg Abbott and a host of other new Republican leaders who did nothing to anticipate the energy slowdown and are doing nothing now to offset it.

Abbott failed to include any specific plans to serve as a catalyst for economic growth if oil prices continued to drop among his priorities for the 2015 Legislative Session.  Neither Dan Patrick nor other Republican leaders took any substantive action during the session to offset the energy slowdown.  Their approach has been to combine happy talk with denial and it has equaled Texas losing ground to competing states.

Abbott’s failure to deliver on campaign pledge
While campaigning for Governor in 2014, Greg Abbott traveled across the state touting state rankings.  Over and over, he pledged to keep Texas in its rightful place, number one. During the release of his economic proposal, “Working Texas”, Abbott said “Texas has the greatest economy in America, let’s make it better.” However, a year and a half into his first term as Governor, Abbott has failed to make good on his pledge. Instead of addressing economic concerns, Abbott denies and distracts.

Abbott’s social media misdirection play
As news broke that Texas’ economy under Abbott had taken a hit, Abbott refused to face the problem, actually he didn’t address it at all. Instead Abbott took to Twitter pointing to other rankings in a clear attempt to mislead Texans and divert attention from his failure to deliver on a core campaign pledge. 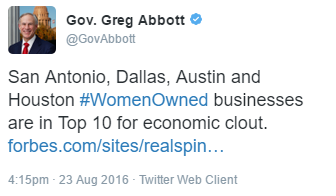 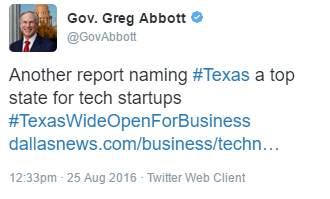 While busy with diversion and misdirection, Abbott and state Republican leaders failed to make the tough decisions – or any decisions – designed to offset the oil bust that has put 250,000 Texans out of work.

State leaders failed to foresee and prepare for the oil slump
The energy bust was no secret, and did not happen suddenly.  The slow down began in 2014 and was well underway when the Legislature met in 2015.  So what did newly sworn Governor Greg Abbott, Lt. Governor Dan Patrick, and Republicans in the legislature do to protect the Texas economy?  Pretty much nothing beyond pursuing their own narrow political agenda and the usual GOP handouts to deep pocketed special interests.

Here’s a few examples of what Texas Republicans prioritized instead: