Why did it take the media so long to grill Trump's surrogates as they alway have Hillary Clinton's? One hopes that their dereliction of duty is not fatal to the American citizenry. Chuck Todd appeared to flirt with journalism on this one.

Chuck Todd grilled Kellyanne Conway, Trump's campaign manager and countered her spin like he had never done before. Is journalism's new found spine too late?

Todd started with Trump's birther reversal. He asked Conway when did the Donald conclude that the President was born in the United States. What was the campaign manager's answer?

"You would have to ask him that," Kellyanne said. "That's a personal decision."

Chuck did not let up. Kellyanne tried to spin birtherism as starting with Clinton surrogates. Chuck did not let her get away with it. He pointed out that Trump rode the birther train for 5 years. He even used the Trump campaign's words against her.

"You guys in a press release on Friday called birtherism a smear," Chuck Todd said. "You used the word smear. So for five years, and you were doing it to try to attack Hillary Clinton. Does that mean for five years Donald Trump was perpetuating a smear? So if he was, why didn't Donald Trump apologize to the president?"

Kellyanne answered passed the question to claim it was a Clinton smear. Chuck then read some of Trump's vile tweets promoting birtherism.

"How can you totally dismiss this as part of his political identity," Chuck Todd asked.

Kellyanne did the bait and switch.

"Chuck I think the only people left obsessed about this are those still covering it," she replied.

Todd told her she was deflecting. He then reminded her that Trump promised a $5 or $50 million charitable contribution to a charity for the 'resolution' of the birther issue. Todd asked if he will be paying up.

"You would have to tell me the details of that before I can answer that question," Kellyanne replied.

Chuck called out Trump for tricking the media into promoting the opening of his hotel. He then poignantly enumerated Trump's flip flops in a list. 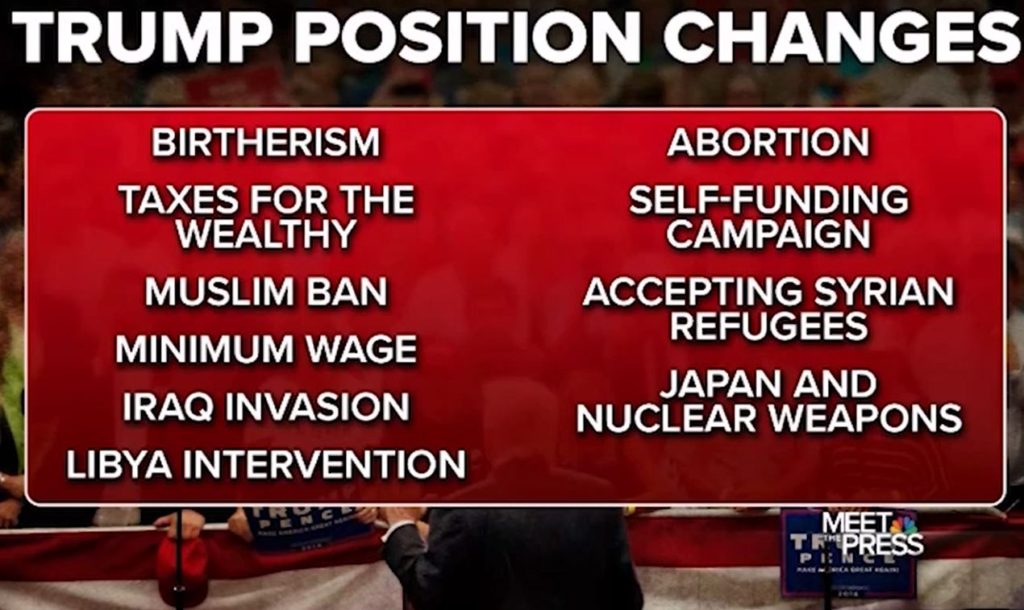 Chuck Todd finally asked Kellyanne Conway if Trump will disassociate herself from the Trump enterprise, an enterprise with foreign connections that is a conflict of interest with the presidency. She responded that she does not make pledges on behalf of Trump.