A few months ago while attending Netroots Nation 2016 in St. Louis, Missouri, I took an Uber with former State Senator Nina Turner (D-OH) and State Senatorial Candidate Tamara Johnson Shealey (D-GA) to visit the site of Michael Brown’s killing by police officer Darren Wilson. Standing at the site where the body of another human being, the young black man, who laid in the sun for north of four hours as an animal, had a profound effect on me. I am usually stoic and barely show outward emotion, but this one hits home. The same applies to the two women, one who cried, visibly overcome with the fact that this was not some isolated incident. These women both have sons, including one who is a police officer.

Since the Michael Brown killing, police officers killed several more innocent black men. To be clear, these taking of innocent lives are not new to communities of color. It simply never got reported. Cell phones with cameras made everyone a citizen journalist. These citizen journalists brought to the forefront the violence with which some police officers treat people of color. Secondly, it showed the frequency with which they lied on police reports. 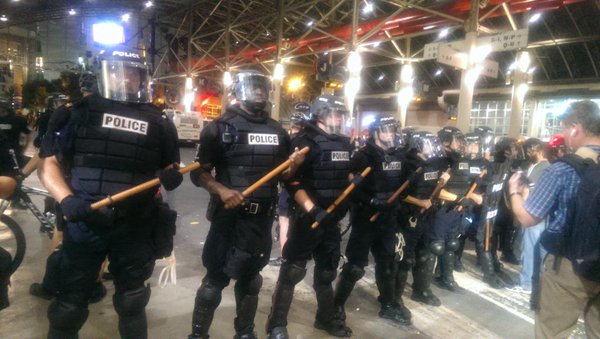 "When you think about it," Claxton said. "You have to believe that time and time again, you have black folk, - unarmed black folk, many times, sometimes armed black folk possibly, -who are committing basically suicide by police, who are engaging in a course of conduct that is so abhorrent and abnormal that they are placing themselves at the mercy of a police force. And that just can't be the case. Instead of us looking and examining the realities in certain communities by certain police officers and police agencies, we choose to be dismissive of concerns of people. And that is where you find that the frustration is beginning to boil over. But you can't dismiss the reality of a history and a legacy of police violence toward black people. There is no way to dismiss that. It is time to now address it affirmatively."

But he was not done there. He expressed frustration that should affect us all. Why must one always preface cops with some statement of benevolence before identifying the problem given all the innocent dead black men and people of color killed by police officers?

"First of all, I have a huge problem with some of the genuflexion that goes on towards police," Marq Claxton said. "It is time for us to stop this thing about lionizing police. And I am talking as from a professional police officer, retired now for several years. I was a volunteer. I wasn't a victim. I was a volunteer. I knew what my responsibilities were. I knew what the job required. I knew that there would be difficult times. I knew I was faced with extremely dangerous positions. I knew there was a possibility that perhaps I would not make it home to my family at times. But I volunteered for that because I felt that I could perform and do that job in a certain way. And I upheld those professional standards throughout my career. I think it's time for us to stop providing excuses and stop providing the disclaimer even when you criticize the police by saying ninety percent of police do a great job. These things are a given. It is time for us to really address the issues that concern a large segment of our society without having to lionize and bow down before police officers. These are volunteers and not victims, nd they should be held to high professional standards. And it is time this country, this government does just that."

Police officers reflect society. They bring those prejudices into their job like anyone else. The difference is that those biases affect their judgment. Unless laws and rules are modified to jail them for instituting their prejudices, nothing will change. Nothing has changed because this is a problem deemed by the majority, not of their own. It is a national lack of empathy. When some people find excuses when videos show at best overreaction or at worse assassinations, they choose not to believe their own eyes.

Charlotte Police Chief Kerr Putney made his priorities clear when he said the aim is to protect assets, properties, and buildings. He said nothing about the human problem within his department.

What will it take to correct failed policing in America? The lack of empathy by our society requires subjecting us all to some sort of discomfort. That is the importance of Black Lives Matter and other organizations bringing this issue to the forefront.

While any action taken must be peaceful, it must speak the only language that seems to effect change in this country, economic pain to those who hold the power to institute change.