The KPFT 90.1 FM Houston family work hard every day to bring the community what commercial radio cannot provide. Its diverse people & programming bring the type of terrestrial and online radio that fit Houston and followers throughout the world. 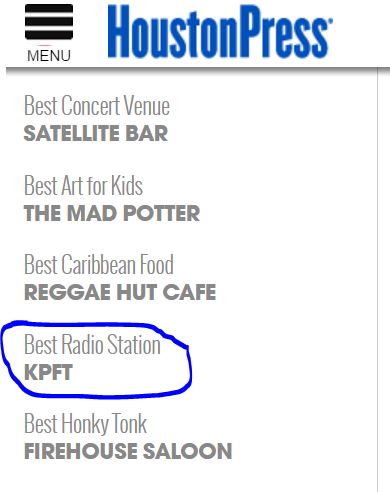 For years terrestrial radio has struggled to remain relevant in the unending tide of digitally driven alternatives, but KPFT continues to demonstrate that, in the right hands, radio can still bring people together. Celebrating its 45th year on the air with a brand-new 100,000-watt transmitter last year, “The Mighty 90” now covers the entire Houston area and then some thanks to auxiliary frequencies in Galveston and Huntsville, which means its value as one of the very few non-corporate-controlled media outlets in the region has skyrocketed. One of the most important byproducts of such independence is a relentless focus on Houston that allows the station to involve as many voices from the community as possible, in both its music and its public-affairs programming. Now even more change than usual is looming, after longtime program director Ernesto Aguilar announced his departure this summer. His successor has huge, crucial shoes to fill.

KPFT 90.1 FM is supported entirely by the listening community both on air and online. While commercial stations have deep pockets from ads to corporate influx to frame the stations’ message, KPFT stands alone with the community. It is community driven. It is run and programmed 24/7 by volunteer members of the community with a skeleton staff.

KPFT 90.1 FM is the only large FM radio station in the South East Texas (Gulf Coast) where one can listen to progressive voices, alternative and independent music, and eclectic programming. Please help support this gem by donating or pledging at https://pledge.kpft.org/index.php?id=polright.