It began with a so-called “third-rate burglary” in June 1972, and ended a little more than two years later when a powerful president resigned in disgrace.

As the Watergate scandal unfolded, a career United States congressman – barely known outside his Newark, New Jersey district – painstakingly assembled the legal case that led to the downfall of Richard Nixon, 37th President of the United States.

U.S. Representative Peter W. Rodino Jr., D-N.J., earned the nation’s trust for his dogged, dispassionate pursuit of justice as chair of the House Judiciary Committee, which was assigned to investigate articles of impeachment against Nixon, a Republican, for “high crimes and misdemeanors” in violation of the U.S. Constitution.

The burglary of the Democratic National Committee (DNC) headquarters in Washington, D.C.’s Watergate office complex sparked a national crisis that dominated the halls of government, media and Americans’ collective psyche. It helped expose a deeply ingrained environment of corruption and political retribution within Nixon’s presidency.

Ultimately, Rodino’s nonpartisan stewardship of the Judiciary Committee led members from both political parties to adopt three articles of impeachment against Nixon for obstruction of justice, abuse of power, and contempt of Congress.

Until Watergate, Rodino had been known as a hard-working, effective member of Congress. Still, most of his tenure had been hardly remarkable. The son of Italian immigrants, he earned a law degree from what is now Rutgers University-Newark, was a decorated Army captain during World War II and started his 40-year career in the U.S. House in 1949.

Gerald M. Pomper, Board of Governors professor of political science emeritus at Rutgers University-New Brunswick’s Eagleton Institute of Politics, devoted a chapter to the Newark native in his book, Ordinary Heroes and American Democracy. “Nixon was trying to undermine the Constitution and extend the powers of the presidency to a near imperial, authoritarian government,” Pomper says.

“Rodino was personally very honest and had great disdain for Nixon,” Pomper explains. “He was a great patriot, a soldier in World War II, and as a lawyer and legislator, loved the Constitution. It wasn’t personal animus toward Nixon. It was misdeeds like the Saturday Night Massacre.” 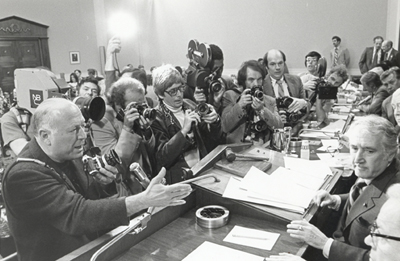 Photo: Seton Hall University Peter Rodino is interviewed by the media during the Watergate hearings.

Rodino was respected by colleagues but had received little public attention before Watergate. Pomper observes: “Like many politicians, he made reelection a priority as he worked on local or individual matters for his base constituency, first, largely ‘Americans of Italian descent’ and later, African Americans as his district’s demographics changed. He contributed to important 1960s civil rights legislation and served as the House floor manager for the landmark immigration revision of 1965. He had co-sponsored a 1954 bill to add ‘under God’ to the Pledge of Allegiance. But aside from legislation to make Columbus Day a national holiday, no law bore his name.”

But in 1972, Rodino’s seniority made him chair of the 38-member (21 Democrats, 17 Republicans) Judiciary Committee. Shortly after assuming his new role, the committee opened its impeachment inquiry. U.S. Representative Paul S. Sarbanes, D-Md., later a U.S. Senator from Maryland, was in only his third year in the House when he served on Rodino’s committee.

“Chairman Rodino brought a balanced hand to the responsibility and was eminently fair,” recalled Sarbanes. “He wanted a broad coalition to support the committee’s efforts and he didn’t indicate a [personal] position.”

Throughout the hearings, Rodino was extremely conscious of his awesome responsibility as committee chair. “The chairman worked night and day. He recognized the severity of the issues,” Sarbanes says. “He faced tremendous pressure but knew the importance of doing it right.”

To demonstrate his impartiality, Rodino chose John Doar, a Republican and former Justice Department civil rights attorney, as the committee’s special counsel. He also allowed the Republicans to appoint their choice as special counsel, Albert E. Jenner Jr., and agreed to let James D. St. Clair, special counsel to the president for Watergate, call witnesses before the committee.

U.S. Representative Hamilton Fish IV, a Republican from New York who eventually voted for impeachment, praises Rodino for his fairness throughout the investigation, adding: “The team of 40 some lawyers assembled and assigned to conduct this inquiry perhaps make up the finest law firm in the United States.”

In a transcript provided by William Berlin – a professor of political science and law at Montclair State University, who was researching a proposed biography when the former congressman died a month shy of 96 in 2005 – Rodino says, “And I knew somehow I was going to be the focal point as a leader and that my conduct had to be, my behavior, my demeanor, my every word had to be such that I would not in any way suggest any hint of partisanship, and if necessary, lean over backwards to consider the views of others.”

Rodino’s doggedness eventually led to a six-day stay at Bethesda Naval Hospital for exhaustion. He found new strength when one of his doctors told him, “We need you.”

On July 24, 1974 Sarbanes was chosen to introduce Article I of impeachment – charging the president with obstruction of justice for attempting to cover up the DNC break-in. After three days of debate, Article I passed, 27-11. Six of the committee’s Republicans voted for impeachment.

The Judiciary Committee eventually recommended three articles of impeachment, but Nixon resigned on August 9, 1974, before the full House and Senate could consider them.

After the first article of impeachment was adopted, Rodino returned to the committee offices, where he began to shake as tears streamed down his face. Weeping, he retreated to a washroom and then to the counsel’s office where he called his wife. “I pray that we did the right thing,” he reportedly said. “I hoped it didn’t have to be this way.”