Many in America continue to live in a cocoon of willful ignorance. The democratization of information delivery now allows those who suffered in silence to reveal the stories of their pain, oppression, murders and much more. Tiffany Martínez’s is a must read.

I read Tiffany Martínez’s blog post titled “Academia, Love Me Back” with disbelief. I know that bias and prejudice remain vibrant in America. It is much more subtle than what Martínez’ encountered generally. And that is what’s shocking about her experience.

Martínez is a McNair Fellow and student scholar. She writes that she’d presented at national conferences in San Francisco, San Diego, and Miami. She is published in a peer-reviewed journal managed by the Pell Institute for the Study of Higher Education and the Council for Opportunity in Education. She works two jobs even as she maintains her full-time student status at Suffolk University. She is on the Dean’s list. A decidedly hurt Tiffany Martínez wrote the following on her blog.

Academia, Love Me Back 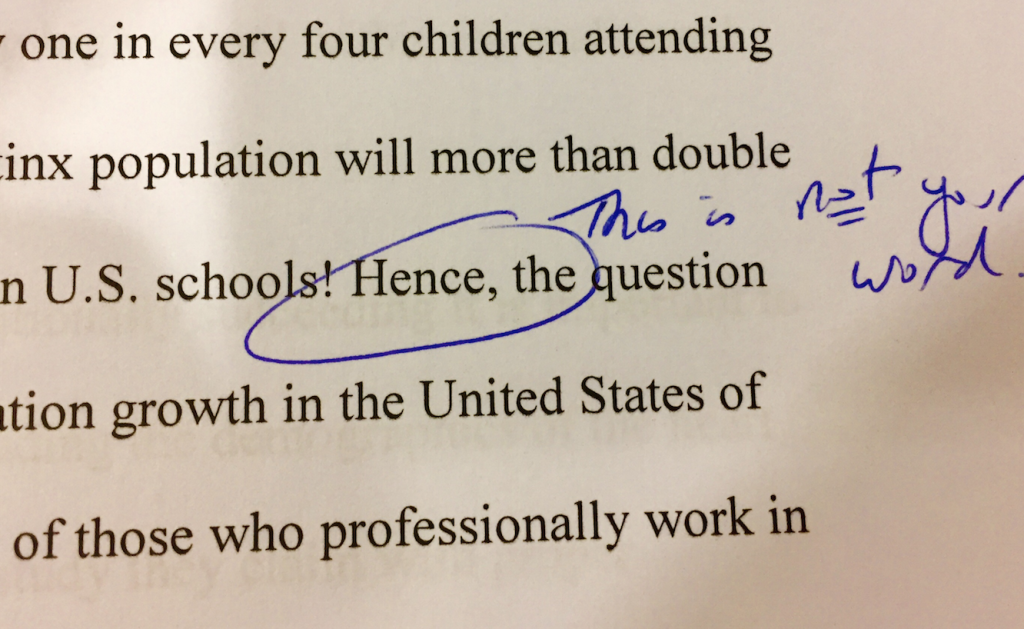 Today is different. At eight o’clock this morning, I felt both disrespected and invalidated. For years I have spent ample time dissecting the internalized racism that causes me to doubt myself, my abilities, and my aspirations. As a student in an institution extremely populated with high-income white counterparts, I have felt the bitter taste of not belonging. It took until I used my cloud of doubt and my sociological training to realize that my insecurities are rooted in the systems I navigate every day. I am just as capable if not more so than those around me and my accomplishments are earned.

This morning, my professor handed me back a paper (a literature review) in front of my entire class and exclaimed “this is not your language.” On the top of the page they wrote in blue ink: “Please go back and indicate where you cut and paste.” The period was included. They assumed that the work I turned in was not my own. My professor did not ask me if it was my language, instead they immediately blamed me in front of peers. On the second page the professor circled the word “hence” and wrote in between the typed lines “This is not your word.” The word “not” was underlined. Twice. My professor assumed someone like me would never use language like that. As I stood in the front of the class while a professor challenged my intelligence I could just imagine them reading my paper in their home thinking could someone like her write something like this?

In this interaction, my undergraduate career was both challenged and critiqued. It is worth repeating how my professor assumed I could not use the word “hence,” a simple transitory word that connected two relating statements. The professor assumed I could not produce quality research. The professor read a few pages that reflected my comprehension of complex sociological theories and terms and invalidated it all. Their blue pen was the catalyst that opened an ocean of self-doubt that I worked so hard to destroy. In front of my peers, I was criticized by a person who had the academic position I aimed to acquire. I am hurting because my professor assumed that the only way I could produce content as good as this was to “cut and paste.” I am hurting because for a brief moment I believed them.

While attending the University of Texas at Austin, I experienced the same type of ridicule both from professors and students. The fact that I remember the incident exactly as it occurred thirty plus years later speaks to the indelible impression bias, prejudice and worse can have on the psyche of people some would attempt to oppress and marginalize.

It was during the first week in one of my Mechanical Engineering classes. I raised my hands and asked the professor what he meant by ‘interstitial’ in the context he was using it. He laughed and asked, ‘You don’t know what that is?’ A couple of students giggled and said the black guy doesn’t know what it is.

They assumed this black guy was one of the quiet ones that would melt into silence and obscurity. I didn’t. I got up out of my desk and looked one of the guys straight in the eyes and told him I was sure he did not know what it meant and pressed him to tell the class. The professor must have been shocked because he stayed out of the confrontation. The guy could not answer. I sat down and the professor with a red face explained what he was talking about. I never had a problem in that class again. But I do have many other stories at the University of Texas, my jobs, and my businesses in 30+ years of my professional careers.

I did not have a blog,  website, camera, or tape to relay my story to the world. Tiffany Martínez did and she used the platform perfectly.

The wonderful thing about the democratization of information is that all voices can now be heard. Good Americans get to see, listen to, and read first hand the pain, suffering, disenfranchisement, abuse, and marginalization of many Americans in real time or near real time. Forced or systemic silence is no longer a weapon available to the oppressor. All that is left is the willful ignorance of those who acquiesce to the status quo.