This mock election is batting 100% so far. It has not lost an election yet it seems unlikely to lose this one. Here are the results as posted a few hours ago.

November 6, 2016 — If the votes cast in a nationwide mock election by nearly 75,000 students from more than 150 high schools across the country are any indication, the next president of the United States will be Senator Hillary Clinton. The results of the election were revealed on Sunday evening, November 6, during a two-hour-long webcast at www.votes2016.org.

The voters were all participants in this year’s VOTES Project (Voting Opportunities for Teenagers in Every State), the nation’s largest mock election for high school students. The VOTES Project was founded in 1988 by two teachers at Northfield Mount Hermon, a boarding school in Gill, Massachusetts. Over the past quarter century, the results of the mock election have correctly predicted the actual winner in six of the last seven U.S. presidential elections. The one “off” year was 2004, when incumbent President George W. Bush beat Senator John Kerry. 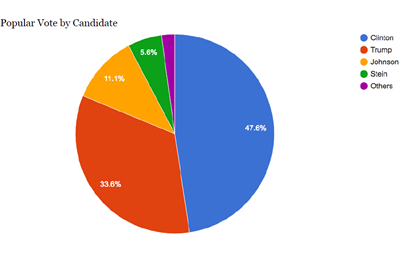 Besides its size, one of the things that makes this mock election unique is that it simulates the Electoral College, which means the results of the popular vote from each state are converted into electoral votes. To win, a candidate has to win at least 270 electoral votes. In this year’s election, Clinton won 332 electoral votes, while Donald Trump earned 206 electoral votes.

Northfield Mount Hermon history teacher Jim Shea, a co-founder of the VOTES Project said, one of the most surprising things about this year’s election was how close the race was in many states. “In more than a dozen states, the race was decided by less than 100 votes, even though, in some cases, several thousand votes were cast in those states.”

Shea said he was also surprised by the strong showing of third-party candidates in almost all states. “In total, third-party candidates won more than 19% of the vote, which is higher than in any VOTES election since the days of Ross Perot and Ralph Nader. In at least three states, they played a major role as ‘spoiler’ candidates.”

The key to the election, said Shea, was the fact that Clinton won just about every swing state including North Carolina, Nevada, Ohio, Colorado, Iowa, New Hampshire, and Pennsylvania. The two states that perhaps returned the most surprising results were Georgia, which went for Clinton, and Wisconsin, which went for Trump. Trump also won the hotly contested state of Florida.

Each of the schools that participated in VOTES held their elections on different days over the course of the last two weeks. The final tally, however, was not revealed until Sunday night during a gala election night “broadcast” conducted out of James Gymnasium on the Northfield Mount Hermon campus and streamed live over the web. A recording of the broadcast can be viewed at www.votes2016.org. The simulated broadcast included nearly all the bells and whistles of an actual election night broadcast. Student news anchors announced results on a state-by-state basis, and student reporters conducted interviews and provided political analysis. There was even music and a balloon drop.

In addition to casting ballots, students at many of the participating VOTES schools spent the weeks leading up to their school’s election day participating in a variety of events such as mock campaigns and mock debates, during which students took on the roles of Sen. Hillary Clinton and Donald Trump. Some schools conducted workshops or brought in speakers to talk about various political issues. At least one school used the program as an opportunity to conduct an actual voter registration drive for those students who were 18 or older.

“The VOTES Project has proven to be a remarkably effective and fun way to teach our high school students about the electoral process and to engage them in a conversation about the important issues facing our country,” said Shea. “The hands-on mock election experience allows teenagers to be active participants in the political process rather than merely passive observers. What better way is there to teach them how to be thoughtful, engaged, and informed citizens in the future?”

For all its educational value, however, this year’s mock election was not immune from suffering from some of the same dynamics that have characterized the whole election year.

“More than a few teachers at the various VOTES schools commented on how contentious and even divisive this election season was at their schools,” said Shea. “Some schools actually decided to back out of the mock election in the last month either because of how divisive and disruptive it had become or how divisive and disruptive they feared it would become. That never happened in the previous seven presidential elections.”

More information about the results of the election, including a list of states won by each candidate, is contained in the accompanying PDF.

Northfield Mount Hermon, commonly referred to as NMH, is a co-educational independent boarding school for students in grades 9–12 and postgraduate. The school is located on the banks of the Connecticut River in Gill, Massachusetts. NMH was founded in 1879. NMH’s mission is to engage the intellect, compassion, and talents of its students, empowering them to act with humanity and purpose. The school enrolls 650 students who come from more than 34 states and 53 countries.
MICHAEL JAMES TIMBERLAKE  // ASSISTANT VICE PRESIDENT
T +1(202)884-7319 M +1(913)645-9103
1129 20TH STREET NW #200, WASHINGTON, D.C. 20036 // @FinnPartners