Donald Trump and his surrogates are consistent in their attempt to mislead Americans into believing Trump won in a landslide. This CNN host Chris Cuomo made Sean Spicer, the RNC's Chief Strategist & Communications Director, pay for the attempt.

CNN Host Chris Cuomo did not let Trump's spokesman Sean Spicer get away with the fake news that Trump won the election in a landslide.

"I get what the press wants," Spicer said. "But the American people have understood exactly what they are getting, and they voted overwhelmingly for him. He has been very clear about what he owns, the role of his family, and everything else since he announced that he was running for president, and they overwhelmingly elected him with all that on the table. So I understand the desire by some on the left and frankly some in the media to want to comb through certain documents that he had. But the American people are clearly satisfied with what they've got, not only on election day but since he has been elected his approval rating has gone up by twenty-some-odd points. So not only have they elected him, they've become more and more pleased with the job that he's done and hasn't even assumed the office yet."

Chris Cuomo attempted to bring Spicer back to reality with the facts.

"I thought you guys didn't like polls but if we want to play with them," Cuomo said. "We know that more people are concerned about his business dealings than those who are not. We know that his approval rating is low compared to where other president-elects have been at this point." 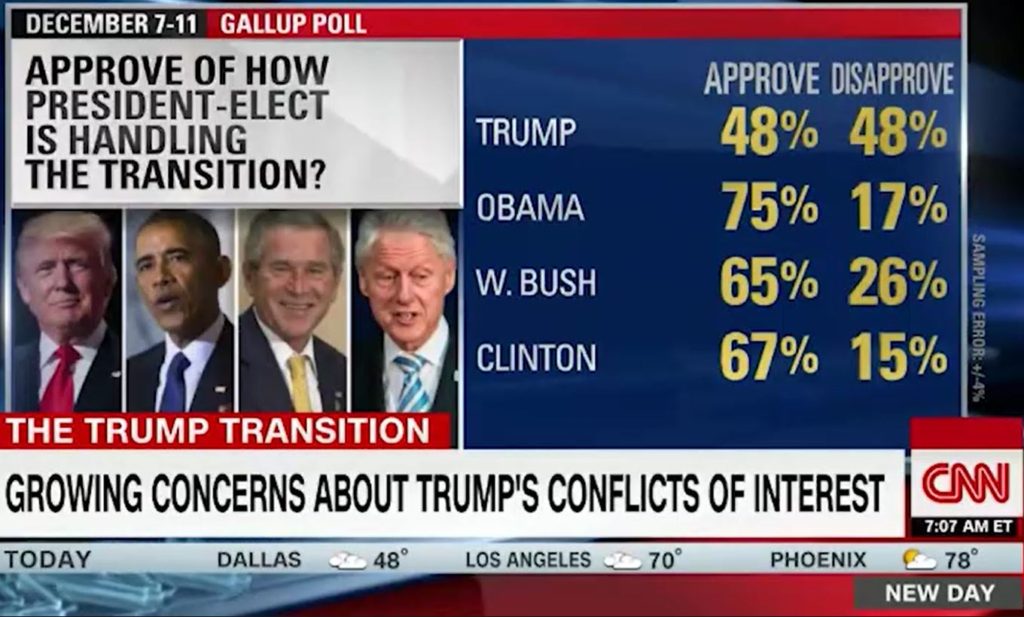 "But let's dismiss the polls," Cuomo continued. "You said they overwhelmingly voted for him. There is no definition of overwhelming that would meet the statistic you see here."

"What I am saying,' Cuomo said. "If you want to be straight about it and transparent, it wasn't overwhelming."

Spicer then tried the bait and switch.

"Hold on Chris," Spicer said. "There is nobody on your network, in the rest of the media who gave him a chance going into election day. None."

"How is that relevant," Cuomo interrupted.  "How does that make his win overwhelming."

"Because to say that he was going to get crushed," Spencer responded. "Hillary Clinton was planning fireworks on the Hudson. ... He wins with 306 electoral votes, nine of thirteen battleground states, 2300 counties and you are saying you doubt whether that is overwhelming?

"Yes because it was about a hundred thousand votes," Cuomo replied. "It is one of the smallest electoral margins we've had. And he lost the popular vote by millions."

Nate Silver put this lie to rest from the beginning when Kellyanne Conway tried misinforming, lying to the American public a few weeks back.

Trump won in the 44th biggest landslide out of the past 54 elections. Pretty epic. https://t.co/TFouy56v2A

Make sure Americans are not snowed by the Trump lying machine. Make sure your friends, neighbors, acquaintances, and family members see this.