Bill O'Reilly gave what ought to be considered a very dangerous and misleading Talking Points Memo that must not go unanswered as it was tailored to rile up the uninformed.

"Abolishing the electoral college," O'Reilly said. "That is the subject of this evening's' Talking Points Memo."

Bill O'Reilly then proceeded with his provocative if not downright racist rant.

"After Hillary Clinton won the popular vote, the left in America is demanding that the electoral college system put into place in 1787 be scrapped," O'Reilly said. "But there is a hidden reason for this. As we reported, even though Secretary Clinton won the popular vote by 2.8 million, the progressive state of California provided all of that margin; Clinton defeating Trump there by about 4.2 million votes."

That is a flawed statement as the converse in several of the Red States is also true. California is a huge state. I randomly selected states that Trump won a significant percentage of the votes. One could then make the same flawed argument. Should we discount those states because they are conservative hubs? 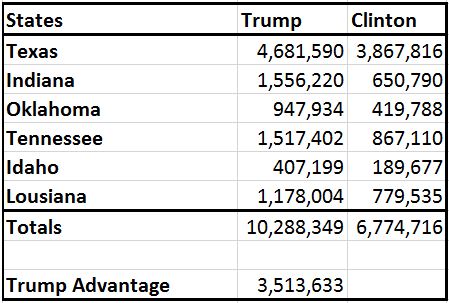 "So if the electoral college were abolished," O'Reilly said. "Presidential candidates could simply campaign in the largest states and cities, New York, L.A., Chicago, Houston, and rack up enough votes to pretty much win any election."

This argument is made constantly but it is nothing but a ruse. As it stands today, candidates ignore solidly Red or Blue states. They do not try to sell policies in most of the country instead battling only in swing states. That process is undemocratic and unhealthy. It does not expose the entire country to the policy arguments. These swing states get all of the informational ads while the others get virtually none. As such these Red and Blue states stay in their respective corners.

"That's what the left wants," O'Reilly said. "Because in the large urban areas, and in the Blue States like New York and California, minorities are substantial. Look at the landscape, Philadelphia, Dallas-Forth Worth, Miami, in all of these places, the minority votes usually go heavily to the Democrats. And to that New York City, L.A., and Chicago, San Francisco, you don't really have a national election, do you. You have targetted populations. The New York Times and the Los Angeles Times have editorialized to get rid of the electoral college. They well know that neutralizing the largely white rural areas in the Midwest and South will assure liberal politicians get power and keep it."

Abolishing the electoral college has nothing to do with neutralizing the white rural areas. It has everything to do with one person, one vote. As it stands today, more people supported Hillary Clinton's policies with their vote. Yet Donald Trump won. Why? Because the white rural vote is overrepresented in the 2016 electoral college because of the voter distribution. That is undemocratic.

"Talking Points believes this is all about race," O'Reilly continued. The left sees white privilege in America as an oppressive force that must be done away with. Therefore white working class voters must be marginalized. And what better way to do that, than center the voting power in the cities. Very few commentators will tell you that the heart of liberalism in America today is based on race. It permeates almost every issue; that white men have set up a system of oppression. And that system must be destroyed"

The above is a dangerous statement. White privilege can only be attained if that privilege is denied to others. Denied privilege is in fact, a form of oppression. Worse, if any group is entitled to a privilege not afforded another, then, that is the definition of supremacy. Bill O'Reilly is trying to justify giving the white rural vote more power than the urban vote or progressive vote. That is a form of white supremacy.

O'Reilly can mock it, but diversity is good and moral. White privilege should be something all Americans see as immoral. If we are a meritocracy, then indeed white privilege is bad.

"If you look at the voting patterns, it's clear that the Democrats are heavily reliant on the minority vote," O'Reilly continued. "Also on the woman vote. White men have largely abandoned the Democrats. And the left believes it's because of racism, that they want to punish minorities, keep them down. So that's what's really going on when you hear about the electoral college and how unfair it really is."

Bill O'Reilly sees a problem with women and minorities favoring Democrats in large numbers. And for that reason, he wants an electoral college that make their votes less valuable than one person one vote.

Again, no one is taking votes away. We must count every American vote equally. Americans' race have nothing to do with it. We are all Americans.