Chris Hayes used Kansas Governor Sam Brownback’s words against him as he tries to sell his failed tax plan to Donald Trump. It was a knockout.

Kansas Governor Sam Brownback should not have believed his rhetoric because as all know now, the ever present videotape refuted his pronouncements.

“Sam Brownback, the Republican Governor, from Kansas, has some advice for the president-elect,” Chris Hayes said. “Telling the Wall Street Journal that Trump should mimic his Kansas tax plan. Brownback’s signature idea, eliminating the 4,6% state individual income tax for partnerships, limited liability corporations, and similar businesses. When Brownback passed his steep income tax cut in 2012, he called it a real life experiment.”

Hayes then played a June 19th, 2012 clip of Brownback saying that on taxes the overall rate needed to come down, removing social manipulations — read social safety net– to create growth.

“We’ll see how it works,” Brownback said. “We will have a real life experiment. We are right next to some other states that haven’t lowered taxes. You’ll get a chance to see how this impacts a particular experimental area. And I think Kansas is going to do well.”

Brownback set a benchmark. Chris Hayes pointed out that it is now beyond three years.

“It would seem logical to take the governor up on his offer,” Chris Hayes said. “As economists have reported for years, that economic vision appears to be failing spectacularly in Kansas. The massive tax cut blew a massive hole in the state budget, and now $350 million deficit is expected to grow; the state credit rating has been downgraded twice and falling cuts to higher education and Medicaid. Brownback used around $2 Billion designated for highway funding to cover the budget hole. Meanwhile, the tax cuts have done little to jumpstart Kansas’ economy overall with growth for this year projected to be flat, compared with 2% GDP growth nationally. Today, we got one more economic indicator out of the region. Brownback claimed in 2012 you can measure his Kansas experiment against neighboring states which did not enact the same type of drastic income tax cuts like Nebraska.”

Hayes displayed the charts showing Nebraska outperforming Kansas by quite a bit. 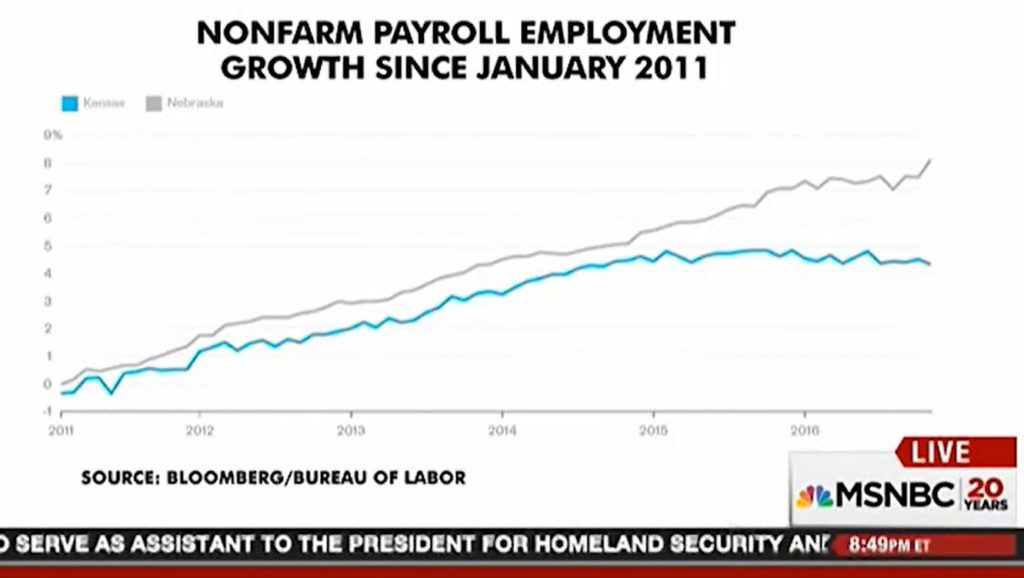 “Justin Fox from Bloomberg has been tracking employment growth between Kansas and Nebraska,” said Hayes. “Today found that the gap has only grown this year. Kansas is that blue line. It has been stagnant, flat for two years, while Nebraska is pulling away. So, why would Donald Trump follow the advice of the governor whose policies created massive budget deficits, credit downgrades, slowed economic growth and hiring? On possible selling point, the plan would probably be good for people like Donald Trump. As the Washington Post reported on Kansas earlier this year, the poorest 20% of households are now paying an average of about $200 more in state taxes according to an analysis by the Institute on Taxation and Economic Policy. Meanwhile, the wealthiest 1% of households are saving an average of $25,000.”

The Laffer curve is a laugh. Look closely. It is an indirect transfer of wealth from the masses to the few.