Ali Velshi shows what journalism is all about as he challenged lying Congressman Tom Cole, Republican of Oklahoma, who attempted to malign Obamacare.

MSNBC's Ali Velshi gave a clinic on how journalists should interview lying politicians as they attempt to use the airwaves to misinform.

MSNBC Host Ali Velshi reminded Congressman Tom Cole (R-OK) that Republicans had seven years to come up with a plan to replace Obamacare.

"At some point, if there is a plan," Velshi asked. "Is someone's going to tell someone about it or is it a secret?"

"I don't think it is a secret," Cole said. "Part of the problem is that we are inheriting a failing system. It's already collapsing, and that was going to happen no matter who the next president of the United States was. Rates are going up. Insurance companies are fleeing the marketplace."

"You are aware congressman that rates were always going up, right?" Velshi interjected to correct Cole's misrepresentation. "In fact, the rate of increase has slowed."

"Not like 116% in Arizona or an average of 25% across the board," Cole continued. "No, they are not always going up and not at this rate."

Velshi then came in for the kill. In other words, he had the facts, graph and all. 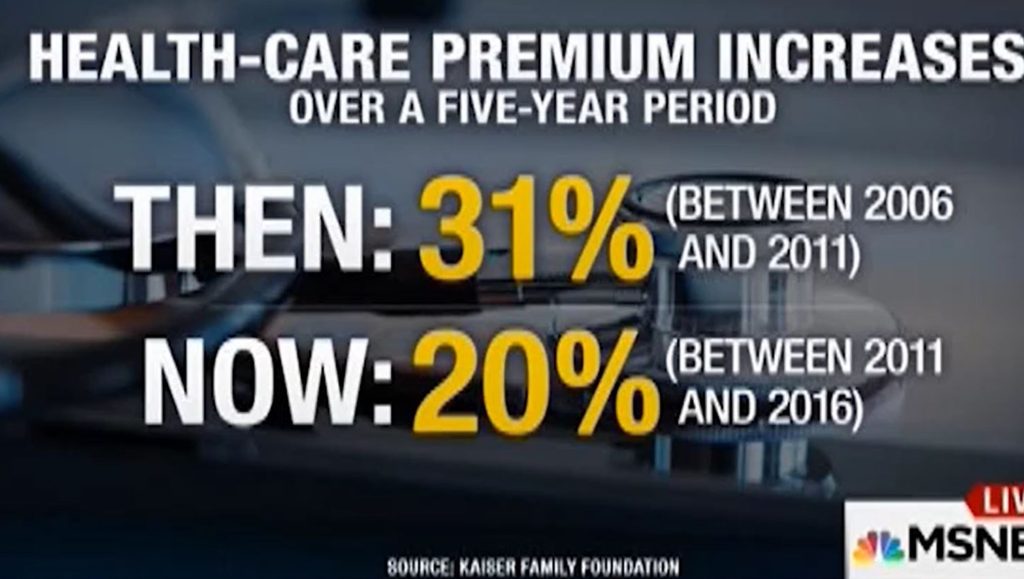 "I just want to put up a graphic that is from the Kaiser Family Foundation," said Velshi. "It divides health care cost increases between 2006 and 2011, a five-year period. And then the latest five-year period which is 2011 to 2016. The first five-year period saw 31% health care premium increases. The new one is 20. So in fact, you can dice this and slice this a lot of ways. But premiums across the board are not actually increasing faster than they were before. I think that is something Republicans are going to have to face."

Cole changed his tune somewhat as he tried to attribute some of the price improvements to Republican passage of Medicare Part D, a big government program that itself had some problems initially.

"But your point is a fair one," Cole conceded. "It is a very complex picture. I think Obamacare Exchange rates have gone up exceptionally high, others not quite so much. And again, that's partly because of the nature of the population you have in those exchanges."

Obamacare is complicated because, in fact, it is market-based. If it were a single-payer system, if that system could negotiate pricing to prevent drug company and hospital gouging, Americans would see a system that works efficiently like those in Canada, Germany, and other industrialized countries.