It seems Republicans are about to overreach once again as Obamacare is at its most popular in the polls. Will they commit political suicide?

Most knew when reality set in that the Republicans were about to put the lives of millions of Americans in danger that Obamacare would get a second look. The march upward in the poll has begun.

As Republicans get closer to repealing it, President Barack Obama’s federal health-care law — or Obamacare — has never been more popular, according to results from a new national NBC News/Wall Street Journal.

And half of Americans — 50 percent — say they have little to no confidence that Republican proposals to replace the law will make things better.

The poll finds 45 percent of respondents believing that the health-care law is a good idea, which is the highest percentage here since the NBC/WSJ poll began asking the question in April 2009. 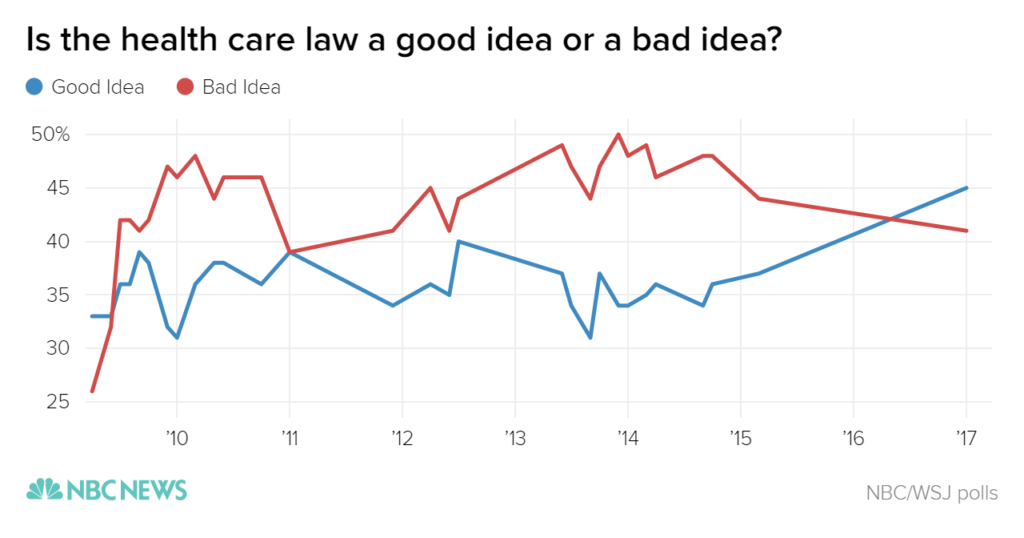 By contrast, 41 percent of Americans say the health-care law is a bad idea. It’s the first time in the poll since the law’s passage in 2010 where more think it is a good idea than a bad idea.

Activists are getting the job done as they point out what Obamacare repeal will really mean. Republican politicians are starting to get the 2009 TEA Party treatment. This time, however, it is based on fact based information instead of fallacies like death panels. It is now time to amp up the pressure. It is time for everyone to call their two Senators and their congressperson. Most importantly encourage everyone in your sphere to do the same.