More than the large tip, the message this Texas Republican left for the black waitress is what makes the Trump effect a path difficult to navigate. The attempt to understand the dynamic is why I am committed to engaging the Trump voter.

Trying to understand the Trump voter is essential if we are to ultimately reach a politically working viable society that functions through multiple ideologies.

I ran across an article that I so loved that instead of getting my behind to bed after several days up too late, I decided to write about it. The story was that touching.

A group of three Republican West Texas men walked into the restaurant Busboys & Poets. Rosalynd Harris, a black waitress, smiled and engaged in small talk. She then seated them.

According to CBS News,

The polite waitress didn’t treat the men differently than any other customer she had. So, imagine her surprise when she cleared their table to find this thoughtful message scribbled in blue ink along the side of the check: “We may come from different cultures and may disagree on certain issues but if everyone would share this smile and kindness like your beautiful smile our country will come together as one people. Not race. Not gender. Just American. God Bless.” Harris’ jaw dropped as she spotted the $450 tip at the bottom of the $70 receipt. 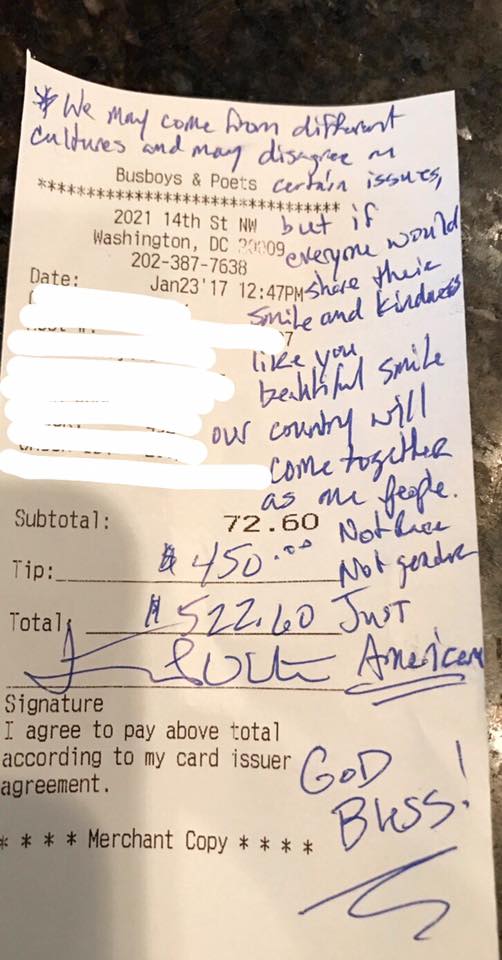 Harris reiterated a sentiment that we should always exercise.

Never judge a book by its cover and always be open with people to experience something miraculous like that,” Harris told WUSA-TV. “We may have different opinions and disagree on different issues, but the fact that he still looked at me as an equal and someone of value, it said something, like OK, not all hope is lost.”

A newspaper found generous tipper who had a message himself.

On Wednesday, The Washington Post identified the generous tipper as 37-year-old Jason White, who said he didn’t even tell his friends about the kind act. His only concern at the time: spreading a message of unity.

“We have to think about being better Americans, we have to look into ourselves and how we treat one another,” White told The Washington Post. “If everyone did a little something to show respect…we can love one another.”

Human beings are complicated. There are all kinds of intersectionalities in thoughts. There are different degrees of tolerance and judgments based on life experiences that make understanding choices tough.

After talking to a ton of Trump voters, I realize that it isn’t always willful ignorance, outright ignorance, or prejudice that determined a vote for Trump. Some people are willing to disregard the failings of a Trump because of some intrinsic value that parallels something they want. They are not bad, just wired unempathetically. It is the same reason a Republican Senator see a reason to support gay rights only when one of his own comes out of the closet.

Let me digress for a minute. A question for progressives. A question for myself. Do we display a similar lack of empathy to those who honestly within their core believe abortion is murder? I mean, hypothetically, if there was a group who said life is not valued until one is five years old and as such we could choose to have that life extinguished with no consequence, how would we react? I know it is extreme, but I am trying to be introspective. I am unabashedly pro-choice, but I am trying to look through the eyes of an honest anti-choicer and then evaluate my perceived tolerance.

We will never agree 100%, 80%, or even 75% of the times. In fact, our realities may have intersectionalities that are more class based than ideological. The powers stress ideological differences because a population fighting among each other is not fighting the oppressive forces that are ultimately responsible for an unfair and unsustainable class structure.

I believe that we can break the cycle. This process is a lot easier for Progressives than Conservatives given that Conservatives tend to be much more rigid in their thought process. But engaging with folks like the Conservative Texan in this story can be a catalyst to bring others within his tribe along. The reality is that this is the only type of viable solution to our national divide.