It was clear that Fox News with their tweet attempted to confuse Americans. They wanted to give the impression that it was a Muslim terrorist who killed six people in the Canadian mosque. It was a French-Canadian white nationalist. Canada scolded Fox News publicly.

Canada’s spokeswoman did not pull any punches in the letter she sent to Fox News. She embarrassed them into acting.

It has come to my attention that a Fox News tweet posted on Twitter at 12:31 PM, January 30, 2017, contains false and misleading language relating to the identity of the suspect in the Quebec mosque terror attack. I have attached a copy of the tweet for your reference.

Over the course of the day, this proved to be false information. In fact, the suspect was identified as 27-year-oldld French Canadian – not someone of Moroccan-origin.

Sadly, this misleading information has been left to stand on the Fox News Channel’s twitter account and continued to circulate online even now.

Canada is an open, welcoming country that stands by its citizens. We are a nation of millions of immigrants and refugees, of hundreds of cultures, languages, and religions bound by one, unwavering, unshakable belief: we are stronger not in spite of our differences, but because of them.

These tweets by Fox News dishonour the memory of the six victims and their families by spreading misinformation, playing identity politics, and perpetuating fear and division within our communities.

We need to remain focused on keeping our communities safe and united instead of trying to build walls and scapegoat communities. Muslims are predominantly the greatest victims of terrorist acts around the world. To paint terrorists with a broad brush that extends to all Muslims is not just ignorant – it is irresponsible.

If we allow individuals and organizations to succeed by scaring people, we do not actually end up any safer. Fear does not make us safer. It makes us weaker. Ramping up fear and closing our borders is not a solution. It distracts from the real issues that affect people’s day to day life.

For all of these reasons, we ask that Fox News either retract or update the tweet to reflect the suspect’s actual identity.

Thank you for your anticipated cooperation. 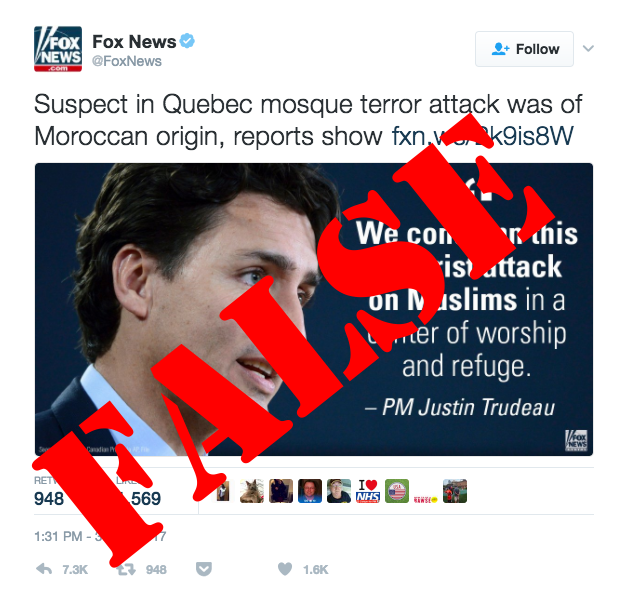 Amid pressure from the Canadian prime minister, Fox News has apologized for a tweet that inaccurately identified the suspect in Sunday night’s Quebec mosque terror attack as a man of Moroccan origin.

“FoxNews.com initially corrected the misreported information with a tweet and an update to the story on Monday. The earlier tweets have now been deleted,” Refet Kaplan, the managing director at FoxNews.com, said in a statement. “We regret the error.”

On Tuesday, Prime Minister Justin Trudeau’s office called on Fox News to “either retract or update” the “false and misleading” tweet, noting that the suspect had been identified as a French Canadian, not someone of Moroccan origin.

Alexandre Bissonnette, 27, faces six counts of first-degree murder and five attempted murder charges in Sunday’s shooting, according to the Royal Canadian Mounted Police in Quebec. Authorities have not released a possible motive, but Trudeau denounced the attack as an act of terrorism.

“These tweets by Fox News dishonor the memory of the six victims and their families by spreading misinformation, playing identity politics, and perpetuating fear and division within our communities,” Kate Purchase, the prime minister’s director of communications, said in a statement.