I hope the 2016 election is the low point in our history. Never have I seen so many vote against their real values and interests for the sake of party. I watched intelligent people, including some in my own immigrant family, buy into an American narrative void of fact-based reality.

What happens now? President Obama is no longer present as the irrational symbol of disdain for many. America is under the rule of one party. Rhetoric and demagoguery must now meet reality.

In the suburbs like Kingwood, Atascocita, the Woodlands and many others, households will come to the realization that the economically advantageous undocumented immigrant status quo was pretty good for their pocketbooks as they lose their inexpensive housekeepers, lawn persons, and babysitters.

Around the state many convenient store owners who make a bulk of their income during the lunch hour when these people we so demean, purchase their lunches, gas, etc. will see the impact of the country’s rash judgment. Throughout farm country, many who thought they were voting for party because it was all rhetoric, have already seen the fear based decline in the number of workers to tend their crops and livestock.

Americans need not fear immigrants and immigration of any form. When the settlers came, they conquered to create this nation. Most immigrants are just coming for a job. And they work harder than most for much less. We can humanely integrate those who found a way to make it here and at the same time mitigate detrimental or dangerous immigrant flow. We should also be mindful of reality. Net immigration flow at our southern border has been zero for several years now.

Nativism in an interconnected world never works. The nativists will always be the ultimate loser.

My article on immigration as appeared in the Kingwood Observer 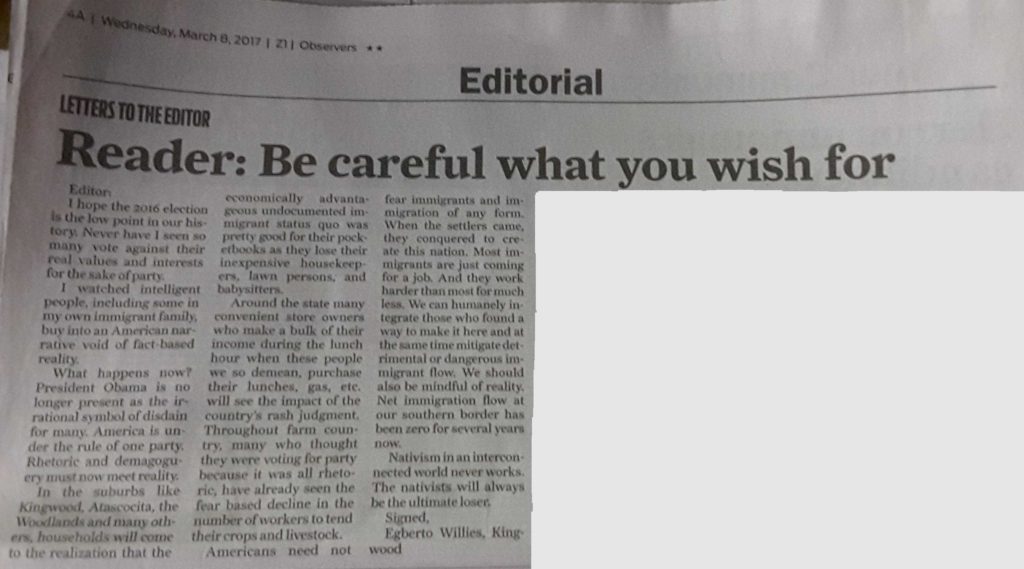