With the national news focused on Trump’s foreign policy gaffes, travel bans, and unqualified cabinet appointees, the most un-American thing he has done has almost fallen through the media cracks.  His appointment of internet pseudo-journalist and right-wing propagandist Stephen Bannon to the National Security Council introduces politics to a group that has remained resolutely non-partisan since it was founded by President Bush in 1989.  To make room for Bannon, Trump ousted the Director of National Intelligence and the Chairman of the Joint Chiefs of Staff.  It’s not a stretch to suggest those two would have provided much more meaningful security information at these meetings than Bannon.

When faced with similar pressure, President Bush banned Karl Rove from the NSC meetings.  Every president since has preserved NSC political impartiality.  National security decisions should be made independent of political considerations.  Imagine the right-wing outcry if President Obama had appointed David Axelrod to the NSC!

With this appointment, Trump has again shown his desire to surround himself with poorly qualified sycophants, while avoiding dissenting opinions and people who can’t or won’t be bullied.  Like Nixon, Trump doesn’t seem to understand the difference between being President and being King.  It’s going to be a difficult few years for our democracy. 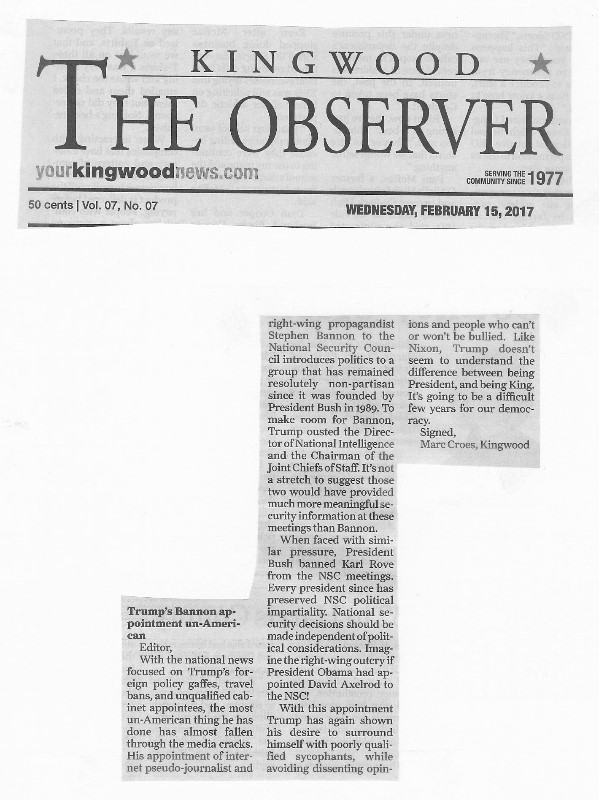