House Republicans passed a draconian and evil healthcare bill. It is now in the hands of Senate Republicans. Ironically, Republicans have a glaring omission in the choices they made on who will design their health care bill, and it fits their profile. They reverted to their norm, exclude most.

It is hard to believe that when picking thirteen members to work on health care in the Senate, Republicans could find no female Senator to serve. CNN Host Erin Burnett did not let it go unnoticed. She called them out.

"They are the Republican Senators who will take the House Bill passed yesterday and craft the Senate version which could become Trumpcare," Burnett said. "That version could be the law of the land. And there is not one woman at the table to represent more than half the population of this country."

She then showed the picture of the thirteen white male Republican Senators. 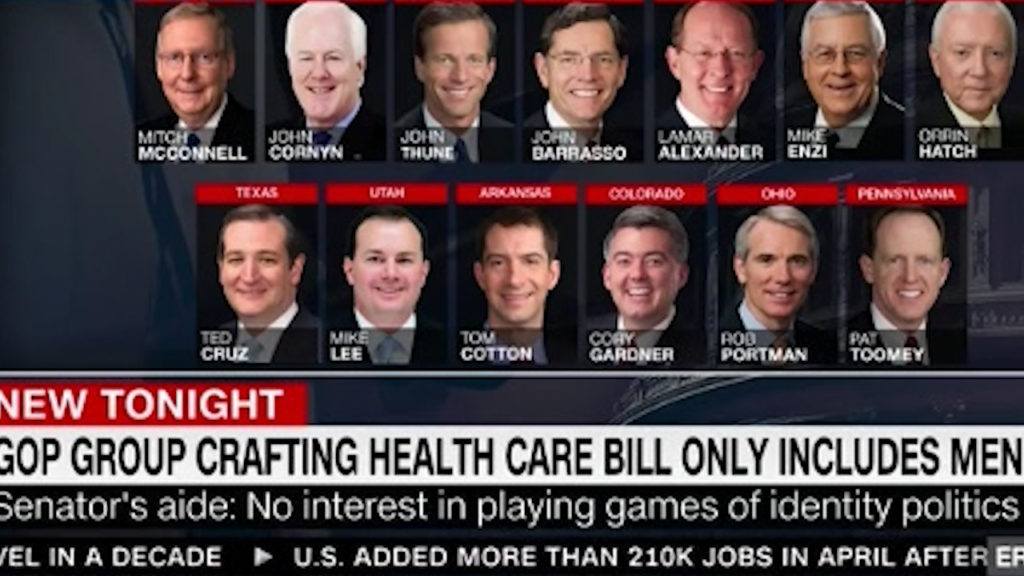 "Why couldn't they find one woman to represent the concerns of one hundred twenty-six million female adults in the United States of America," Burnett said. "What can they realistically bring to the table when the conversation turns to let's just say, childbirth, maternity leave, ovarian cancer, or breast cancer. And what is their response tonight to excluding even one woman?"

Burnett then read the response a Republican aide gave to Dana Bash.

“We have no interest in playing the games of identity politics, that’s not what this is about; it’s about getting a job done. We’ll work with any member of any background who wants to pass a health reform bill that will reduce premiums and take away the burdens that Obamacare inflicted. To reduce this to gender, race or geography misses the more important point of the diverse segments of the conference the group represents on policy — from members who support Medicaid expansion to those opposed to it, to those who have called for long-term full repeal.”

Erin Burnett finishes with the most appropriately sarcastic statement.

"Well apparently, that is what good governing is these days," Burnett said. "According to those thirteen white men."

Americans need to be purged of the mental slavery that afflicts many. They must unshackle their minds and assert their inherent power. Let's step out together folks. Let's #resist.