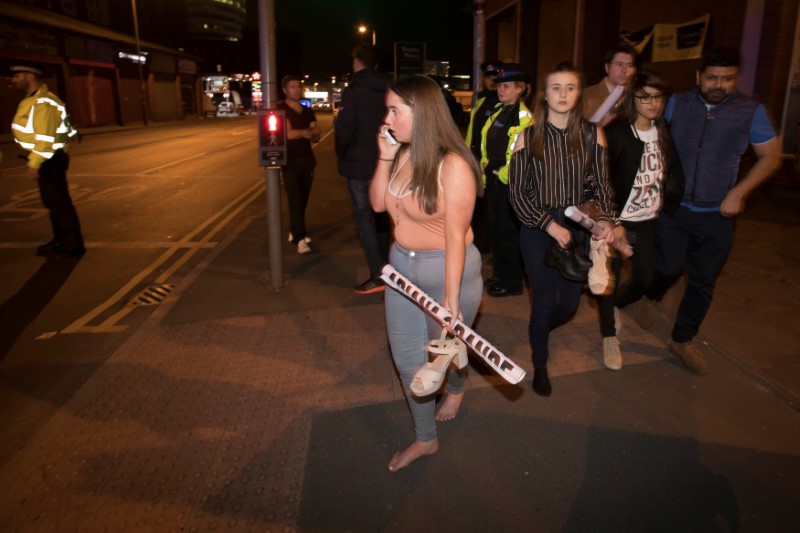 Concert goers react after fleeing the Manchester Arena in northern England where U.S. singer Ariana Grande had been performing in Manchester, Britain, May 22, 2017. REUTERS/Jon Super

MANCHESTER, England (Reuters) – At least 19 people were killed and more than 50 wounded in an explosion at the end of a concert by U.S. singer Ariana Grande in the English city of Manchester on Monday, in what two U.S. officials said was a suspected suicide bombing.

Prime Minister Theresa May said the incident was being treated as a terrorist attack. If confirmed, it would be the deadliest militant assault in Britain since four British Muslims killed 52 people in suicide bombings on London’s transport system in July 2005.

Police responded to reports of an explosion shortly after 10:35 pm (2135 GMT) at the arena, which has the capacity to hold 21,000 people, where the U.S. singer had been performing to an audience that included many children.

A witness who attended the concert said she felt a huge blast as she was leaving the arena, followed by screaming and a rush by thousands of people trying to escape the building.

A video posted on Twitter showed fans, many of them young, screaming and running from the venue. Dozens of parents frantically searched for their children, posting photos and pleading for information on social media. 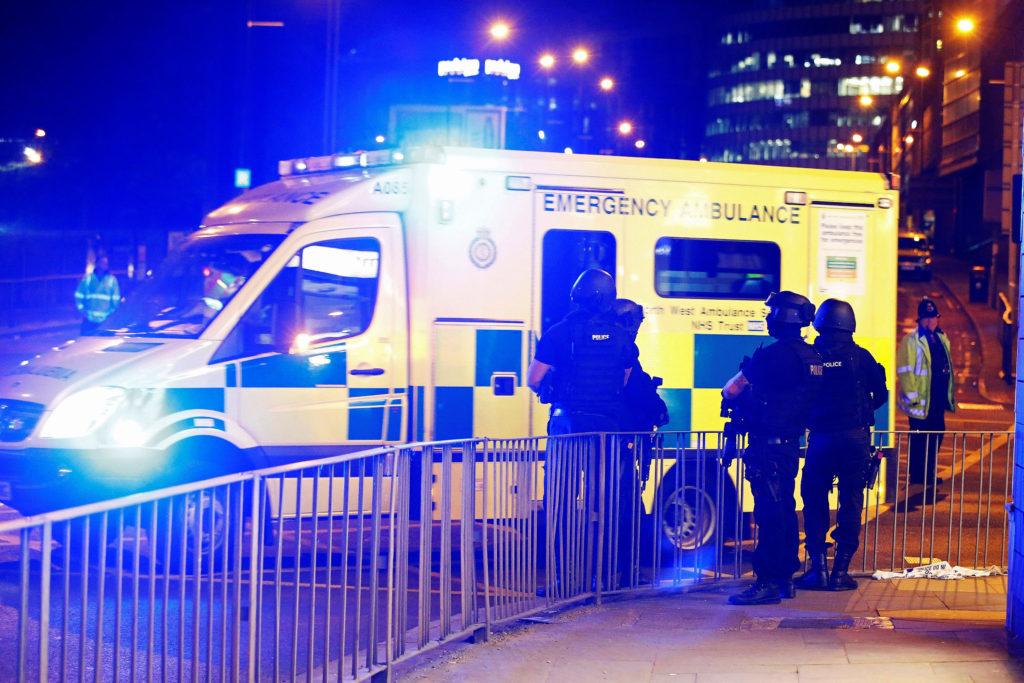 Armed police officers stand near the Manchester Arena, where U.S. singer Ariana Grande had been performing, in Manchester, in northern England, Britain May 23, 2017. REUTERS/Andrew Yates

“We were making our way out and when we were right by the door there was a massive explosion and everybody was screaming,” concert-goer Catherine Macfarlane told Reuters.

“It was a huge explosion – you could feel it in your chest. It was chaotic. Everybody was running and screaming and just trying to get out.”

A spokesman for Ariana Grande, 23, said the singer was “okay”. The singer later said on Twitter: “broken. from the bottom of my heart, i am so so sorry. i don’t have words.”May, who faces an election in two-and-a-half weeks, said her thoughts were with the victims and their families. Her ruling Conservative Party was preparing to suspend campaigning ahead of the election due to the suspected attack.

“We are working to establish the full details of what is being treated by the police as an appalling terrorist attack,” she said in a statement. “All our thoughts are with the victims and the families of those who have been affected.”

May will hold a crisis response meeting on Tuesday.

Manchester Chief Constable Ian Hopkins said police were treating the blast as a terrorist incident and were working with counter-terrorism police and intelligence agencies but gave no further details on their investigation. 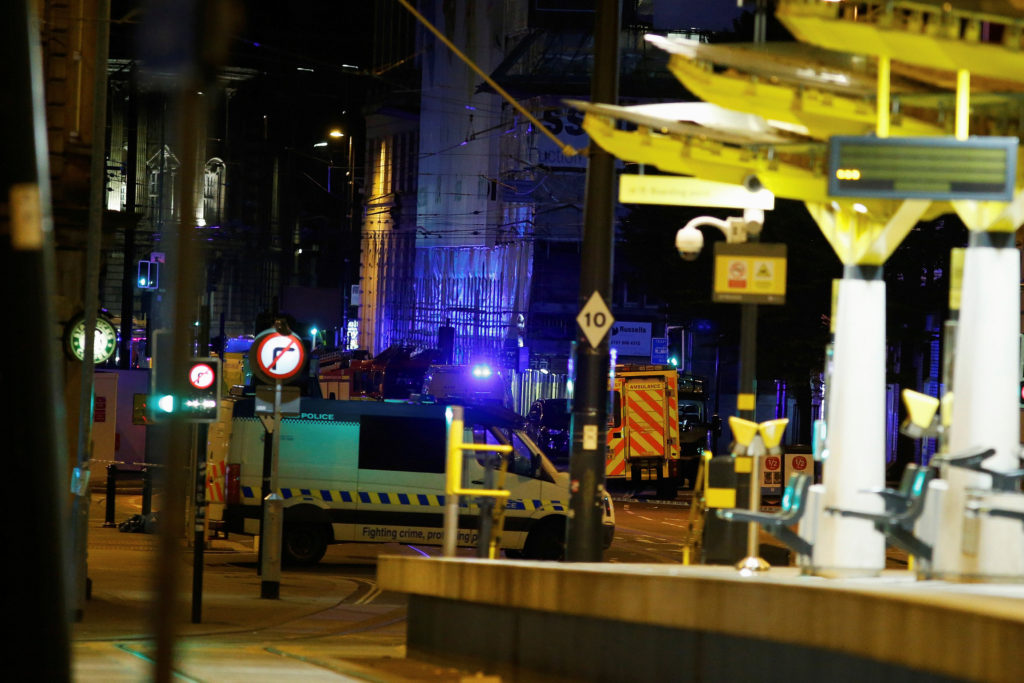 A police vehicle is seen outside the Manchester Arena, where U.S. singer Ariana Grande had been performing in Manchester, northern England, Britain May 23, 2017. REUTERS/Andrew Yates

There was no immediate claim of responsibility, but U.S. officials drew parallels to the coordinated attacks in November 2015 by Islamist militants on the Bataclan concert hall and other sites in Paris, which claimed about 130 lives.

Two U.S. officials who spoke on condition of anonymity said that initial signs pointed to a suicide bomber being responsible for the blast.

“In the absence of conclusive evidence, the choice of venue, the timing and the mode of attack all suggest this was terrorism,” said a U.S. counter terrorism official who also spoke on condition of anonymity.

The Islamist militant group has not claimed responsibility for the attack, although Islamic State supporters took to social media to celebrate the blast and some encouraged similar attacks elsewhere.

Britain is on its second-highest alert level of “severe”, meaning an attack by militants is considered highly likely.

The U.S. Department of Homeland Security was monitoring the situation in Manchester closely but said it had no information to indicate a specific credible threat involving music venues in the United States.

British counter-terrorism police have said they are making on average an arrest every day in connection with suspected terrorism.

In March, a British-born convert to Islam ploughed a car into pedestrians on London’s Westminster Bridge, killing four people before stabbing to death a police officer who was on the grounds of parliament. The man was shot dead at the scene.

In 2015, Pakistani student Abid Naseer was convicted in a U.S. court of conspiring with al Qaeda to blow up the Arndale shopping center in the center of Manchester in April 2009. 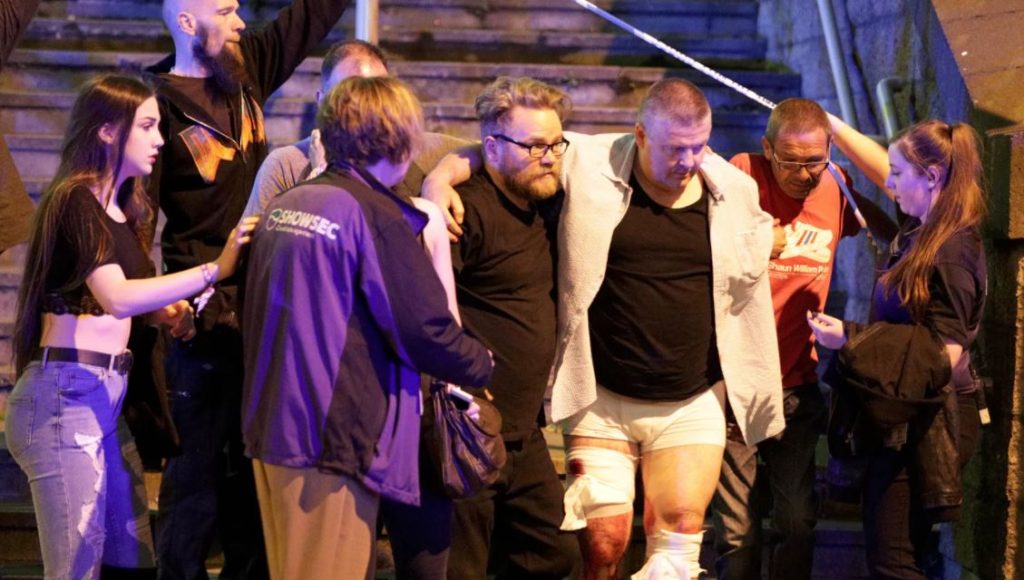 Manchester Arena, the largest indoor arena in Europe, opened in 1995 and is a popular concert and sporting venue.

Desperate parents and friends used social media to search for loved ones.

Paula Robinson, 48, from West Dalton about 40 miles east of Manchester, said she was at the train station next to the arena with her husband when she felt the explosion and saw dozens of teenage girls screaming and running away from arena.

“We ran out,” Robinson told Reuters. “It was literally seconds after the explosion. I got the teens to run with me.”

Robinson took dozens of teenage girls to the nearby Holiday Inn Express hotel and tweeted out her phone number to worried parents, telling them to meet her there. She said her phone had not stopped ringing since her tweet.

“Parents were frantic running about trying to get to their children,” she said. “There were lots of lots children at Holiday Inn.”