Donald Trump's theme of the week is Made-In-America. This MSNBC host lays waste to his plan as she exposes the fraud that is the president's words versus the actions of his family's companies. The panel explained the reality of America's manufacturing problem and Trumps inability to propose real policies.

Stephanie Ruhle, one of the few journalists challenging Trump lies in real time,  told Americans about Trump's hypocrisy in his Made-In-America theme week.

Stephanie Ruhle started the segment pointing out that they shopped at Trump Tower three different times to see if Trump was practicing what he is preaching. She probably figured that after the first and second reports, they would do something about selling mostly imported products. That was to no avail. They found the same results in January, April, and just 24 hours ago.

Of course, they did not attempt to find U.S. manufacturers. They knew that after the stories ran, they would take hell for a while and it would be all forgotten if the media did not stay on top of it. Ruhle continues to hammer the truth.

Stephanie Ruhle asked why didn't the Trump family do something about what she pointed out.

"It has largely been a do as I say not as I do administration thus far," Ron Insana said. "This is not that surprising."

He went on to say that low margin goods have been leaving the United States for some time and that some of that manufacturing is coming back albeit with automation. That means fewer jobs than would otherwise be with old technologies. What he did not say is that these products that are sold in gift shops usually have such a high markup that the Trump family and others selling these types of products could forego a marginally diminished profit to make them in America. But their greed supersedes their patriotism.

Rhule went on to show that Ivanka Trump's products are made in many other countries and not America. 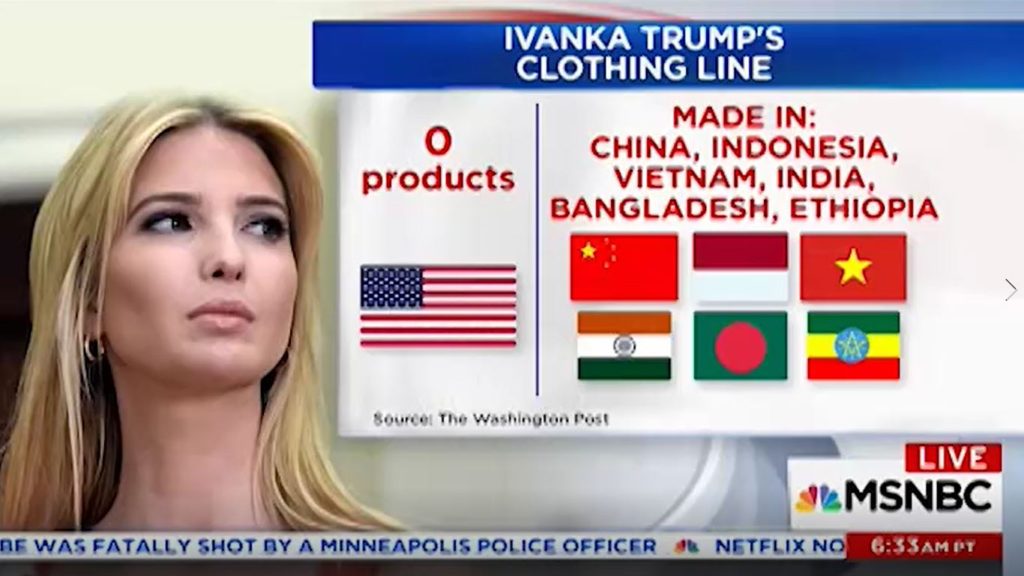 Senior Editor at the Atlantic Derek Thompson said it is an easy layup to point out Trump's hypocrisy. After all, the very same week Trump is singing Made-In-America, he was expanding work visas for foreigners who do the kind of work his hotels need, Hiring-Not-American. In other words, his anti-immigrant xenophobic stance ends where it hurts his pocketbook.

Thompson then made it clear that Trump's themes are just a facade for non-existent policies of substance.

Later, Ruhle would point out that the vice-president is addressing the National Retail Federation while retailers are getting smoked as most of their products are produced overseas. Many more retail jobs are being lost than coal jobs.

Exasperatedly Ruhle asked, when will the those who voted for Trump understand the con. She said it not in those words but definitely in intent.