“Hell is empty and all the devils are here.”

Not long after the Cheetoh Hitler took office, I wrote a piece called “Seam Ripper,” which was about watching my country and culture come apart at the seams. In that moment, many of us were feeling the great swell of apprehension and anxiety about what was manifesting in front of our eyes. Many of us (white people) saying, “WTF? This can’t be happening!” The thing is, what we should have been saying is, “Why the F hasn’t this happened sooner?!”

In the essay, I used the metaphor of ripping open a stitched seam… what happens? The stuffing comes out. Oh, what a mess. But let’s extend that ripped seam metaphor in another direction…

So… say you’re white. And say you are an “American citizen” and that it’s something that you not only take for granted, but also take pride in. You have patriotism. You believe in your country. Great. Now, imagine your country, your “Americanness/Whiteness” is a sofa. It is very comfortable to sit on because the cushions have been so fully stuffed. Over-stuffed, you might say. Every day of your waking life, you flop down into this cozy, comfy, over-stuffed sofa of American Whiteness and relax. Kick your feet up. Grab the remote. Pop a cold drink in a can. Life is good.

Now, you have enjoyed this sofa and your spot on it for as long as you can remember. It is a happy place, a safe place, a kind and comforting place to be. So, it is a horrible shock when one day you begin to detect a scent. It’s subtle, but it is quite unpleasant. You light a scented candle and figure maybe it’s the trash that’s stinking. You’ll take it out. There. That’s better.

But the next day, the stink is still there. In fact, it’s a little stronger and somehow a little more pungent. You spray some air freshener and pull the throw blanket over your legs. It will be alright. Maybe there’s a sewer leak somewhere nearby. Or maybe a skunk got hit on the road outside the window. Hmm.

Day after day, as much as you hate to admit it, the smell gets worse. It gets more fragrant, thicker, more noxious. It fills up the room, and you notice that even the throw blanket has begun to stink. You notice something else, too. The seams along the sofa cushions have begun to break and fray, revealing something dark and secret and terrible inside. You look but do not touch. You are confused. This makes no sense! Weren’t these cushions stuffed with democracy and fraternity and angel feathers and the prayers of the righteous? How could this be?

The next day, the tears in the fabric are worse and the stench is fully nauseating. You can barely breathe the air and this beautiful sofa, this soft and calm and luxurious furnishing is suddenly a place of horror and disgust. The stuffing has begun to escape the cushions and it does not explode in a puff of fluff, but oozes out like dark water, like oil, like melted wax, like lies and secrets. And as the padding which has held you up and supported you and made you comfortable begins to escape, to leak, to flow, you begin to finally see the horror that was sitting underneath you all along.

For this cushion-filling, this foundation of white comfort, it was made with the chopped and tortured bodies of millions of Indigenous women, men, children, and babies. It was stuffed with the broken, beaten, abused, and disposed of Black bodies; women, men, children, babies. It is made up of raped women’s bodies, murdered women’s bodies, raped and murdered gay and trans bodies. It was filled with their hair and teeth, their fingers and toes. The fabric and stitches that weave your cushions are the skin and sinew of stolen peoples. It was stuffed with thousands and thousands of now-extinct species of plants and animals, slaughtered waters. You sit upon torture, terror, rape, sadistic murders, and massive genocides. And no amount of scented candles or denial will obliterate that stench.

Now here we are in America… the truths coming out. The stuffing un-stuffed. The secrets and lies born into the light of day with all their foulness and grotesque lineage displayed for us all to see… not only those born of the tortured, born tortured.

Yes. You should be horrified.

Yes. There is nothing fouler than mass murder and centuries of oppression.

Yes. To borrow a phrase from the Christians, it stinks to High Heaven.

Yes. Feel the terror of generations of the beaten and abused.

The only way to build a new America, a new culture, a new world, is to build a “sofa” on which all can sit.  A piece whose innards are not stuffed with rot and cruelty, bigotry and greed and white supremacy, but which is filled with equity, justice, autonomy, a respect for the planet (and all her creatures) and true freedom.

Freedom does not come on the backs of the oppressed. It is not something that can be stolen or hoarded like money or old newspapers. It is a fundamental Law of Nature. It is the divine nature of all beings. And until we recognize that, the seat on which we sit (and I’m talking to you, white America) will continue to be utterly putrid, rancid, festering, and atrocious.

Welcome. You’re invited to the work. You will no longer be cushioned from the reality on which your privilege rests. Nor should you be. 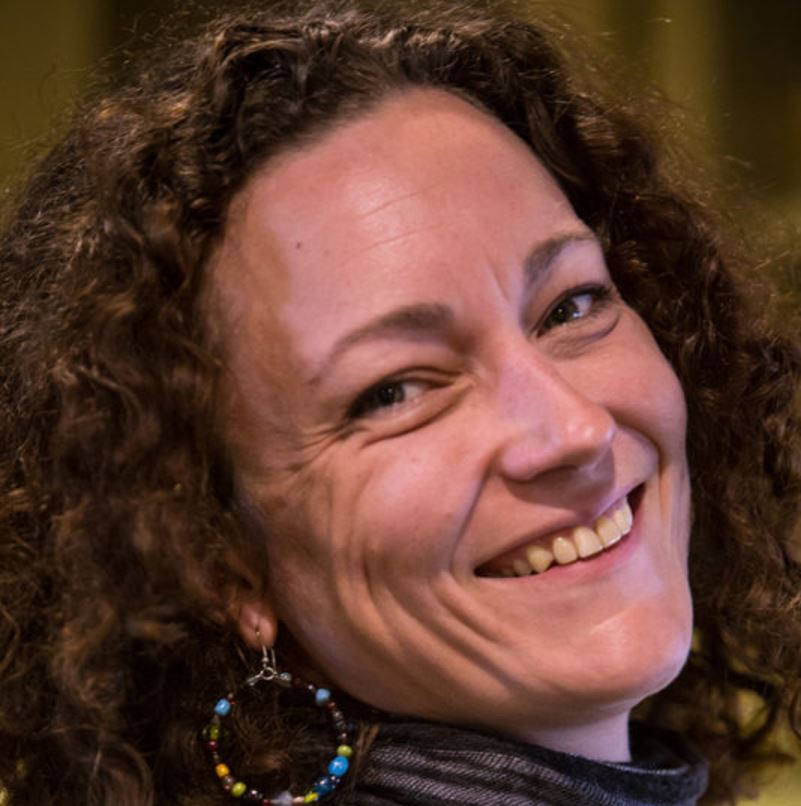 Kate Michael Gibson is a freelance writer and editor and organic vegetable farmer in the northeastern Oklahoma Ozarks. She is an artist, activist, and lover of Earth. Kate enjoys contributing to the work of other writers and makers via editing and dramaturg services, as well as collaborating on new works.  Visit her website at www.katemichaelgibson.com.