Donald Trump was unable to kill Obamacare as Senator John McCain and two other Republicans join Democrats to stymie the effort. Here is how Trump and his ilk are attempting to kill it by a thousand cuts. But there is a silver lining.

If Donald Trump’s sabotage is made irrelevant before too much damage is done, then healthcare while still on thin ice will remain accessible. 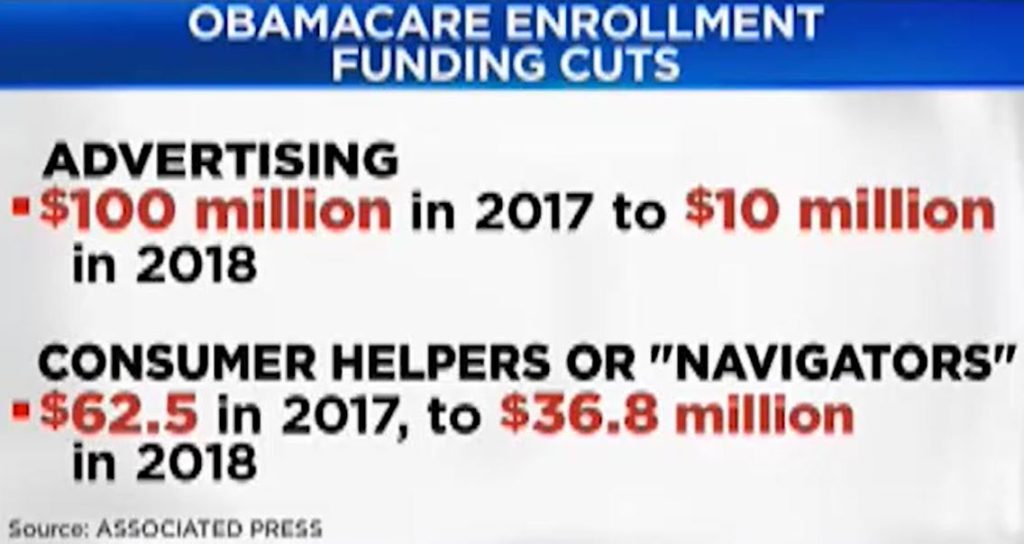 The Trump administration is cutting advertising by ninety percent in 2018. With all the confusion this cut will undoubtedly cause many eligible Americans to forego coverage because they are unaware they qualify.

Additionally, the budget of the people who assist Americans in understanding and moving through Obamacare whoops, known as navigators,  has been cut substantially. This almost ensures that many will miss the window to signup for the Affordable Care Act.

Former Health & Human Services Secretary Kathleen Sebelius reiterated the damage Trump is currently doing to Obamacare. She added that Trump had reduced the number of days that people had to sign up for the ACA. Worse, she said that if the subsidies remain uncertain, insurance rates could double, a direct result of The President’s sabotage.

A silver lining for Obamacare?

Trump sabotaging Obamacare but there may be a silver lining in the making (VIDEO) pic.twitter.com/4cU4bPDeCm

However, Sebelius pointed out that behind the scenes there are bipartisan negotiations taking place to stabilize the Obamacare’s individual markets.

craft a short-term bill that could stabilize the individual healthcare markets, one of the most volatile aspects of the Affordable Care Act.

That includes making sure the government pays out key payments that help offset insurers’ costs of covering certain Americans. President Donald Trump has threatened to end these payments, but Alexander asked that the president continue the payments through the end of September.

Governor John Hickenlooper (D-CO) and Governor John Kasich (R-OH) are working on a bipartisan plan to address healthcare as well.

The framework, outlined in a seven-page letter dated Wednesday and sent to congressional leadership, is also signed by six other governors. It includes recommendations that the controversial individual mandate stay in place for at least the immediate future and that Congress create tax exemptions for insurance carriers who offer plans in underserved counties.

“As Congress considers reforms to strengthen our nation’s health insurance system, we ask you to take immediate steps to make coverage more stable and affordable,” the letter says. “The current state of our individual market is unsustainable, and we can all agree this is a problem that needs to be fixed. Governors have already made restoring stability and affordability in this market a priority, and we look forward to partnering with you in this effort.”

According to Sebelius, the administration has not been a part of the negotiations. Given this president, it is clear if they came up with a solution, he will be ready to and to declare a win.