Jazzy Rowe endured a roommate from hell. She knew her roommate was disrespectful to her. She shockingly found out that the roommate was doing things that were affecting her health and much more. What representatives from the school did with its initial response is appalling. Why did the roommate feel free to expose her evil deeds on Instagram? The Trump Effect. Nothing is off limits anymore.

This black woman's white roommate effected one of the vilest attacks on her to get her to move out of the dorm room. You won't believe this.

Jazzy Rowe posted a very long (1hr 43 sec) Facebook Live video telling her story in graphic detail. The Youtube video included in this post concentrates the essence of her story.

Jazzy Rowe moved into the dorm room on August 27th. She was assigned a roommate, Brianna Brochu.

Rowe claims the roommate has always disrespected her. Brianna Brochu would come into the room and turn the lights out when it was clear Jazzy was using it. To keep the peace, Rowe simply used her personal-light.

According to Rowe, Brochu always tried to get along. She even shared her refrigerator and microwave. But she said her roommate pretty much ignored her.

Jazzy noticed that she had a sore throat that never matured into a full-blown cold. Her throat pained so severely that she went to the clinic. They gave her antibiotics. Soon after, she acquired a new roommate and started to move out slowly. When the roommate found out, she posted on Instagram that she finally got rid of Jazzy. But she also confessed all the vile things she did unbeknownst to Jazzy. 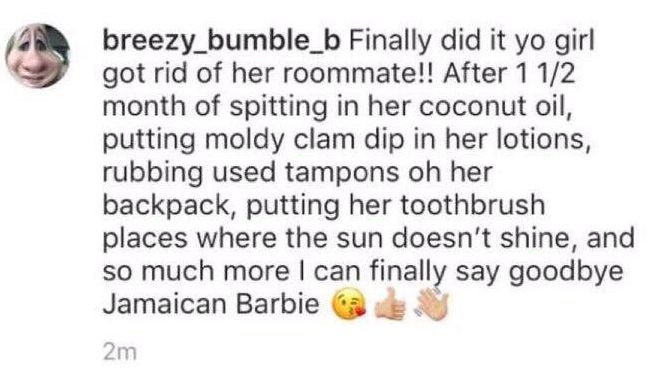 "Finally did it yo girl got rid of her roommate!! After 1 1/2 month of spitting in her coconut oil, putting moldy clam dip in her lotions, rubbing used tampons (on) her backpack, putting her toothbrush places where the sun doesn’t shine and so much more I can finally say goodbye Jamaican Barbie.”

Jazzy brought the incident to the school authorities for an investigation. They made Rowe sign a no-contact agreement. Sadly, in the process, it is clear that the University attempted to intimidate Jazzy. They tried to use the no-contact form she signed to keep her from telling her story. It is obvious it did not work. Rowe is telling her story to anyone who would listen.

Brianna Brochu was arrested October 28 on misdemeanor charges of third-degree criminal mischief and second-degree breach of peace, online court records show. Details of the case were not immediately available. The charges are both class B misdemeanors, which each carry a maximum sentence of 6 months in prison, along with a potential fine. Brochu now faces an additional charge of second-degree intimidation based on bigotry or bias, a class D felony that carries a potential sentence of 1 to 5 years in prison.

We will keep you updated on this story.