The drum beats of the impending blue wave are getting louder. So much so that even the traditional mainstream media are starting to quantify the lead-up. Recently, CNN even led a segment with the graphic that included the words “SINCE TRUMP INAUGURATION: DEM FLIP 34 STATE SEATS, GOP FILP 4.”

But Democrats must not get ahead of themselves. They must do the hard work to keep the momentum. With a dysfunctional GOP that should not be too difficult unless Republicans get a whiff of what sanity could do for many of them in certain districts.

Democrats must be ready for externalities, things that could derail what should surely be a blue wave. In fact, they must pre-empt it.

Buried within the Washington Post article titled “New alarm among Republicans that Democrats could win big this year” there is a paragraph that should concern every American.

In private conversations, Trump has told advisers that he doesn’t think the 2018 election has to be as bad as others are predicting. He has referenced the 2002 midterms, when George W. Bush and Republicans fared better after the Sept. 11 terrorist attacks, these people said.

One could easily disregard a statement like that if it were not coming from a president who thinks solely about himself, a president that puts his interests ahead of that of the country and its citizens. After all, he was willing to cause the deaths of many Americans with the failed passage of Trumpcare just to say he had a win.

It would be easy to dismiss the statement as just another “thinking out loud what many others are thinking but would never say” moment from the president. But not so fast. A decimated State Department and an unqualified Secretary of Department of Homeland Security should give us all pause. It means we are not being as preventative as we should be which in fact opens us to more frequent terrorist attacks,

On Wednesday, the Trump administration conflated terrorism with the immigration debate. CNN reported the following.

Washington (CNN)The Trump administration released a new analysis Tuesday claiming that 73% of those convicted of “international terrorism-related charges” in US federal courts following the attacks on September 11, 2001, were “foreign-born,” attempting to draw a causal connection between hotly debated immigration policies disfavored by President Donald Trump and acts of terrorism.

But the threadbare, 11-page document raised more questions than it supplied answers about what exactly the Trump administration seeks to conclude from the snapshot of data released to the public in the midst of a protracted immigration fight on Capitol Hill.

The Department of Homeland Security focused on 549 individuals convicted of offenses between September 11, 2001, and December 31, 2016. But it included terrorist acts committed abroad (though it didn’t say exactly how many), doesn’t provide a breakdown of how many individuals were arrested for acts committed on US soil and doesn’t explain how many foreign nationals were radicalized only after entering the US.

CNN must be commended for the way they reported on this particular story. They fact-checked the Trump misleader in real time with the lede to the graphic that said, “TRUMP ADMIN TOUTS MISLEADING STATS TO LINK TERROR, IMMIGRATION.” 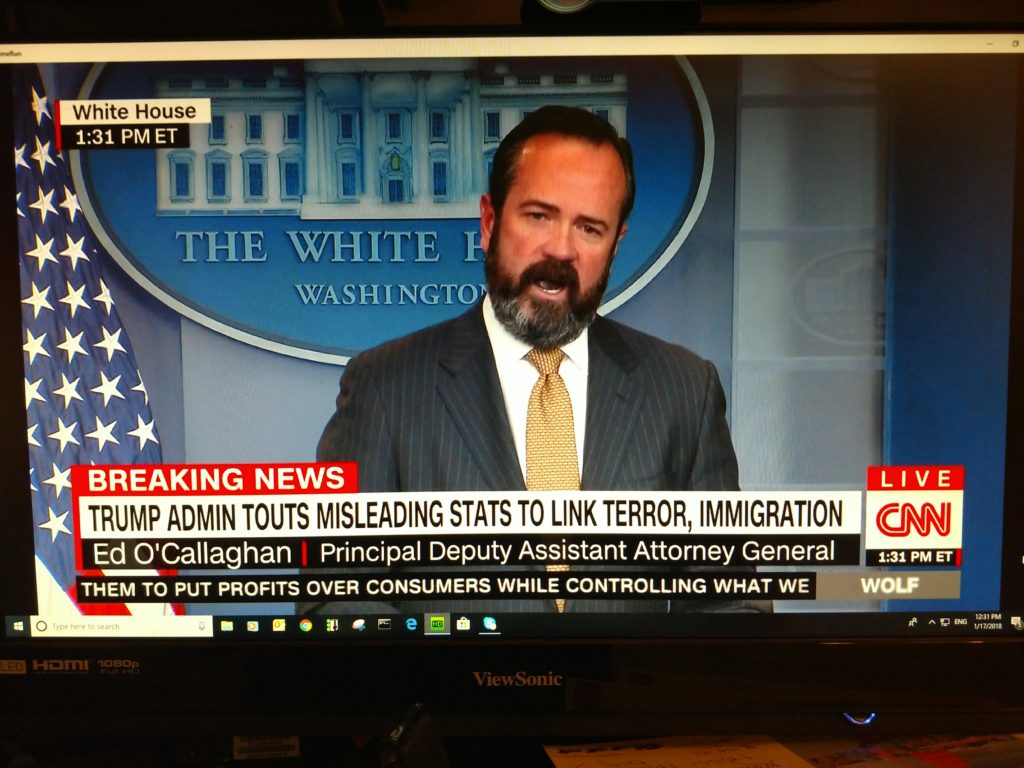 So what exactly is the political play here? The wager the president is making is that a terrorist attack occurs. He assumes that a fearful public will want a strongman, Donald Trump, and his cohort, the Republicans in control. Moreover, since it is unlikely that any immigration bill would mimic Trump’s racist desires, he would have the additional option to blame his inability to discriminate against Muslim as a cause of the attack.

Farfetched? Maybe. Maybe not. Democrats must preempt all narratives that cede defense of terrorism to the president and the Republicans. In fact, Democrats must put out the narrative now that America is at risk of a terrorist attack because of a dysfunctional State Department and a Department of Homeland Security run by an unqualified secretary. Democrats must be on the offensive and must be in preemption mode.

The same must occur on the Affordable Care Act. Just before the 2018 election, Americans will receive another health insurance premium shock.

Democrats must cauterize within the minds of Americans the reality that terrorist attacks and health insurance spikes will likely occur in the forthcoming months because of Republican actions. They must repeat it over and over ad nauseam, It is essential that they are not caught flat-footed, having to fight from a defensive position. They must preempt and stay on the offense. That is how Democrats ensure the Blue Wave does not turn into a ripple.