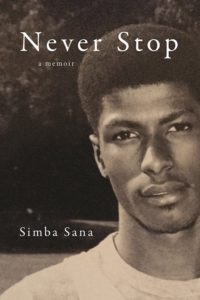 It would be easy to categorize “Never Stop” as a postmodern Horatio Alger novel set in an urban community. This memoir has all the ingredients of a rag to riches story. But such a reading has the potential to render all of the pain, failure, and life lessons chronicled throughout its 260 pages invisible. This isn’t fiction. Each shattered life and every violent death can be traced to an easily locatable time in place in our not too distant past.

Simba Sana’s childhood could be described as catastrophic. His father was a no show. He was raised by a single mother with mental health issues. He grew up in Washington, D.C., at a time when crack was replacing PCP as the drug of choice, and guns were replacing fistfights as the preferred method for settling disputes. He survived a gauntlet of racial and socioeconomic pitfalls that consumed many of his peers. Any of these obstacles could have derailed or ended his life before he attended Gonzaga College High School and then Mount Saint Mary’s University.

Simba’s escape from inner-city violence and poverty is inspiring. If the book had ended with him getting a college degree it would have been a story worth telling, but it didn’t. Simba shares the mistakes he made during his time in corporate America, his successes and failures as co-owner of Karibu Books: the largest independent Black owned chain of book stores in America, and his mostly negative experiences managing boxers.

The money and prestige that came with entrepreneurship couldn’t fill the gaping holes in his life. At no point during his socioeconomic ascension did Simba “have it all”. His professional endeavors were periodically hindered by his militant Pan-African ideology and inability to maintain meaningful relationships with the opposite sex. He was driven to succeed, but at times unable to enjoy his success.

Simba had to lose everything in order to rebuild his life around love. He made a conscious effort to critically think about and challenge his personal philosophy and spirituality. When he finally found his place in the world, he chose to, In the words of John Hope franklin, “Use his history and ingenuity, his resources and talents, to combat the forces that isolate[d] him and…contribute to the solution of the problems that all Americans face in common.”

“Never Stop” belongs on a shelf beside the Black existentialists works that helped foster its creation. Alex Haley’s “Autobiography of Malcolm X” guided a young Simba Sana through his undergraduate years at Mount Saint Mary’s University, but it was close readings of James Baldwin that forced him to cultivate a self instead of replicating one. Near the end of the book Sana writes:

Contemplating the life and work of Malcolm X helped me understand the risks of trying to emulate someone else, no matter how great that person may be. If discovering who I am is the way to fulfillment, then by continuing to follow Malcolm, I ran the risk of making my hero’s issues my own.

“Never Stop” is about self-actualization, love, and inner-peace. There are times when it meanders, but not enough to distract from its narrative thrust. Sana shares all of the pain and shame it took for him to recognize and ultimately address his personal shortcomings. If Nathan McCall’s “Makes Me Wanna Holler” resonated with you in your teens or twenties, then “Never Stop” will speak to you in your thirties and forties.