Is there a political issue in America today that people have a strong opinion on that isn’t reducible to a moral concern? War, abortion, gay marriage, taxes, are any of these not ultimately a concern about human experience and the ways we can either improve it or debilitate it? I would argue that they are. Even if you look at issues like military spending or unemployment from a financial standpoint, your opinion is still informed by what you think is the morally correct decision. So how do you recognize what the moral decision is? If you even can, on what does it mean to know it?

What is morality? While there are a lot of questions about morality and what it is or what it entails, in my experience it seems that there are infinitely more answers. Such is the plight of questions without real world ways to look at it. There isn’t an Atom for morality. We can’t put human values in a beaker to manipulate it, create it or destroy it. I think it’s not a controversial statement to say that whatever morality is, its realm of operation is within our minds.

The commonality with what we’ve seen of all studies of arguable instances of morality is that they take place in creatures with consciousness. And unsurprisingly, the more complex the conscience of the creature, the more complex the observations. This is true for all starting points of morality: scientific, religious, or otherwise. This has led me to the belief that morality is a concept that we created at some point in our evolution as a species. But if morality is something we created, doesn’t that mean there are no right or wrong answers? It’s a terrifying thought, that the things we know in our heart to be true and moral that define our entire lives turn out to be empty and meaningless. Fortunately, that’s not a view I agree with either. Just because morality is a concept we subjectively created doesn’t mean that it doesn’t adhere to a strict set of objective rules. Of course, I don’t expect you to just believe anything I’m saying. I didn’t. But if you’ll grant me the courtesy of your eyeline, we can explore this further.

Colton Llenos: What is moral? 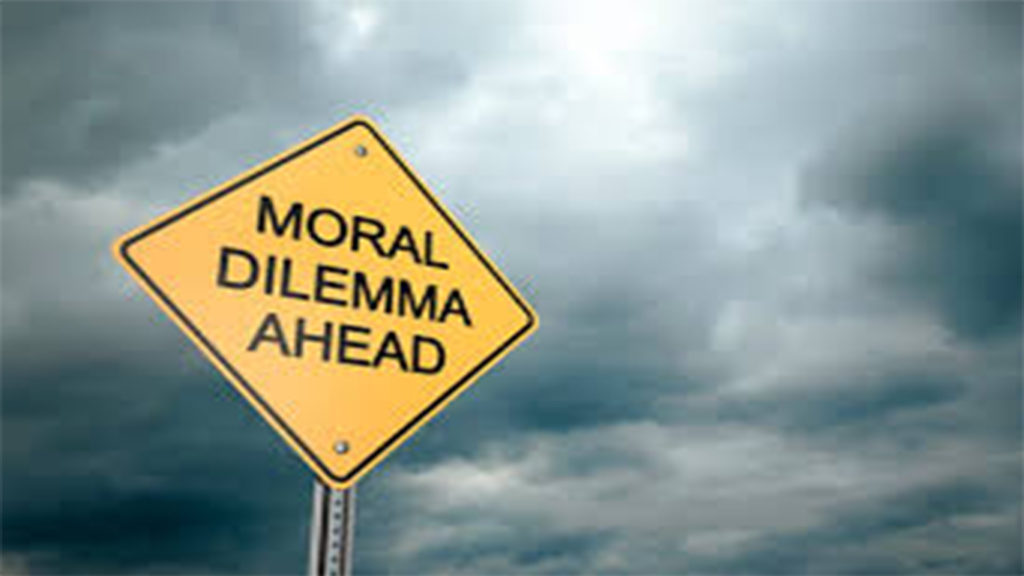 If I’m going to speak about morality in a way that is grounded on Earth and in science, I need to address the idea of morality through revelation, or a divine and holy morality, and how I don’t think anything I am saying contradicts that idea, and shouldn’t be dismissed offhand because it does. Many Christian leaders accept the reality of evolution while simultaneously believing in God. They feel this is not a zero-sum ratio, and I’m arguing that the same case applies to morality. Knowing where morality came from does not contradict that it could be divinely inspired. We can see morality the same way we see the unique shape of our hands, as an evolutionary product with no connotations against a first cause.

Furthermore, a divine morality doesn’t mean that the answers lie in the ether and are inaccessible to us. There are real things to be known that are not beholden to someone’s opinions or beliefs. I am most familiar with the Bible, but am in no way qualified to interpret it for you. Luckily, the point I’m trying to make does not require me to. Take the example of Ephesians 6 verses 5-7:

5 Slaves, obey your earthly masters with respect and fear, and with sincerity of heart, just as you would obey Christ. 6 Obey them not only to win their favor when their eye is on you, but as slaves of Christ, doing the will of God from your heart. 7 Serve wholeheartedly, as if you were serving the Lord, not people, (NIV Translation)

Some of you may recognize these as verses that were heavy ammunition for slave owners in America in the Civil War era. Hopefully, many of you can see something wrong. If the Bible is the inerrant word of God, how can we be reading what we think we’re reading? If the Bible appears wrong, we must not be reading it correctly. Wouldn’t a real understanding of morality and how it works enable us to understand the real meaning of Holy texts? Just like we have an understanding of astronomy or evolution that doesn’t necessarily contradict The Bible, but instead helps our interpretation of it,  why should the most important questions of human existence be off limits to our own observations, especially when nothing else works like that?

Defining morality can be significantly more complicated than it should be at first glance, but there is no escaping the fact that it has to be about creating flourishing and mitigating suffering. Morality doesn’t change even if it is rooted in religion, it’s just concerned more about suffering in a different life. Any view of morality that isn’t concerned about conscious experience is completely missing the point. Your smartphone doesn’t feel pain, and when you let the battery die I don’t suppose that you feel a tremendous amount of guilt.  It’s clear that any extra lines you want to add to your definition of morality, you can’t sidestep that at its core it is a concern for well-being and conscious experience.

Having said that, why do we value flourishing and demonize suffering in the way that we do? You could argue that we’ve developed it from evolution, or that it is self evident that being happy is a preferable way to live our lives, and I don’t disagree with either of those points. However, there isn’t an objective need for it in the same way that hunger is a need for us, we can live without flourishing or with suffering. In fact, many people do it. We collectively decided it was something worth pursuing. Somewhere along the line we developed complex abilities like empathy and compassion, and we started to witness and want to curb the suffering of others as well as ourselves. This is an incredibly noble pursuit, and immensely important. This does not absolve it of being something we don’t have to ultimately value in the first place. It’s the same for religion, eternal damnation is a great deterrent for us to live our lives in a moral way, but you still have the capacity to ignore it in this life and face the consequences later. Being moral is something we choose to do, not what we have to do. It is subjective, and morality is a concept we created, not a necessity of life. Even if it was handed to us, fear of punishment and desire of reward are persuasive factors only, and we have every right to ignore it and make ourselves as miserable as possible. Values are pleasant, not necessary.

If morality is something we more or less dreamt up, how can there be a right or wrong way to approach it? If we just decided to value human life, what is there that someone can say to you to tell you that your way of doing it is wrong? Imagine you’re playing a friendly game of poker with friends. An unfortunate controversy crops up, and you find yourself in a disagreement about the rules. Is there any doubt that one of you is right and the other one is wrong? Even if all of you are wrong, there is still a correct answer just a quick Google away. The rules of poker are the rules of poker. Just because it is a game that we created does not make every subsection of the rules up for debate. All you have to do is decide that your playing poker. After that, the path you take is laid out for you. The same goes for morality, and once we’ve decided that we value the control of suffering and a concern for well being, there are right and wrong answers in how to affect it.

Personally, I find the assumption that we know so little about the quality of human life so to render these questions unanswerable abhorrent. The question of human experience and well being encompasses countless things we know about. Mental health, sleep, nutrition, economy and sociology, education, and other forms of physical health are things that undeniably affect conscious experience, as well as being subject to study and experimentation. Of course, we don’t have all the answers to these questions and we might never have them. However, not knowing the full extent of these sciences does not hurt our ability to discriminate between approaches. Consider that you’re hungry, now have you ever been as hungry as you could possibly be? Have you ever been as full as you could possibly be? I think it’s a safe assumption to say you haven’t. Does not not knowing the ends of this spectrum rob you of the ability to know whether or not you are actually hungry? So it is with the answers to moral questions. Not knowing what the absolute best and worst answers to moral questions does not give equality to all the intermittent possibilities.

We can find these answers through experiment and observation. We can say for a fact that torture is not in the best interest of human flourishing, not because we find it unpleasant, nor because it is against a philosophical or religious idea, but because it reliably leads to unhealthier people in respect to well being. My point is that a concern for conscious experience cannot avoid being related to facts, and these facts are what inform our actions in promoting human flourishing. There is not a way around this, and by accepting that it becomes patently obvious that we cannot hold all accounts of morality equally. It is clear that some people can hold the wrong values. Some people can encourage behavior that reliably makes life worse for them and others. And there is no shame in realizing this and holding them responsible for it.

There is nothing groundbreaking in anything that I am saying. John Stuart Mill’s idea of utilitarianism is quite apparent in my words, as well as a book entitled The Moral Landscape by Sam Harris. If you want a more comprehensive account of a scientific morality I would strongly suggest his book. The issue that I hope to bring to your attention is the duality between a social construct and its ability to still be objective, and how it can relate to a religious viewpoint. I hope there is something that everyone can take away from this. I do most of my learning through research and, more importantly, discourse. If there is somewhere along the last few pages that I have erred significantly or not explained well enough, I leave myself at your mercy to show me where that is. I am nothing if not open to changing my viewpoints with new information. So in summary, there is a compelling case that morality is a fiction that we have decided on amongst ourselves as a species, and that does not render the whole philosophy fruitless. I encourage thinking and learning above all, so don’t take my word for it. I hope this paper can convince you that it is a matter worth questioning your ideas on, and should you learn something that is relevant to this topic that you find consequential I would be surely humbled if you let me know.