The polls continue to say we are about to have a Blue Wave. I am not a conspiracy theorist, but I find it ironic that the mainstream media who have constancy in undermining Democrats and Progressives are pushing this narrative ad nauseam. They are pushing complacency.

Americans do not need just a Blue Wave, they need a tsunami if we are to correct the vast damage Trump and his cabal has inflicted in his short then two years. 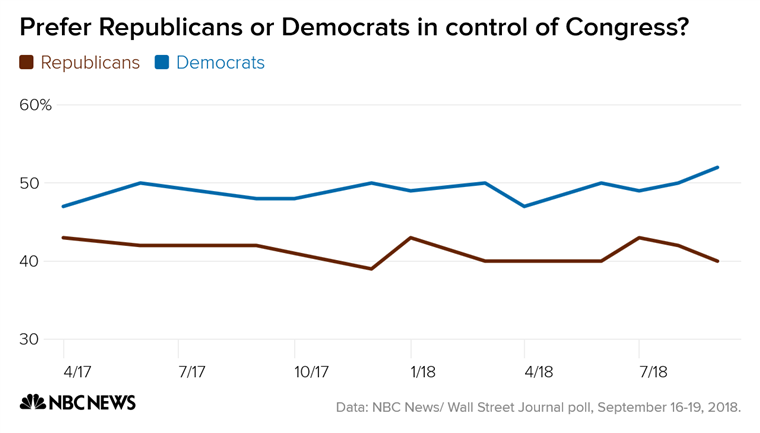 Six weeks before the 2018 midterm elections, Democrats hold a 12-point lead in congressional preference among registered voters, with nearly six-in-10 saying they’d like to see significant change in the direction President Donald Trump has been leading the country, according to a new national NBC News/Wall Street Journal poll.

The results suggest a political environment where Democrats have the clear advantage in their pursuit to win back control of Congress in November. “Americans are hitting the brake in a midterm, and trying to send the signal that they’re not satisfied,” said Republican pollster Bill McInturff, who conducted the survey with Democratic pollsters at Hart Research Associates. “The public is clearly saying, once again, they want to shake up the status quo,” added Democratic pollster Fred Yang.

In that same poll, however, we see Republicans coming home. It shows that this thing is still in flux. And Trump could always work on the carnality of the weak by exploiting their fears and prejudices where they supersede logic and one's personal economy.

Still, the same poll shows that Republican enthusiasm about the upcoming election has increased, drawing nearly even with Democrats; that GOP attacks on immigration and Democratic House leader Nancy Pelosi are potent in individual races; and that nearly 70 percent of voters are satisfied with the economy.

In the survey, which was conducted Sept. 16-19, 52 percent of registered voters say they prefer a Democratic-controlled Congress, versus 40 percent who want the Republicans in charge.

That 12-point lead for Democrats — their highest of the cycle in the poll — is an increase from August, when they held an 8-point edge, 50 percent to 42 percent, although the change is within the survey’s margin of error.

Among the voters who are most likely to vote — the first time the NBC/WSJ poll has measured these voters for the 2018 elections — the Democrats’ advantage falls to 8 points, 51 percent to 43 percent.

Here is the bottom line. We need to take the Senate and deny Donald Trump the appointment of any more Supreme Court Justices. More than ever, Republican Politicians are turning the Supreme Court into a rubber stamp for business interests and the interests of the wealthy commanders of the American Plutocracy.

We need to win Governorships. We must win back the State Houses and Senates so that we can correct the disease created by Republican gerrymandering which allowed a minority to run this country for too long. It's bad enough that most Americans are underrepresented in the Senate by the flawed constitutional design that gives each state two Senators irrespective of population. One hopes an enlightened people will do away with both that and the Electoral College. They are both anti-Democratic as they continue to disregard a large percentage of the voting population.

Democrats and Progressives, please do not buy into this big lead crap. Let's tell our folk we are fighting from behind for many systemic reasons, voting machine irregularities, voter suppression, voter intimidation, and much more. They can still win with a thousand tiny scratches that bleed us to a loss.