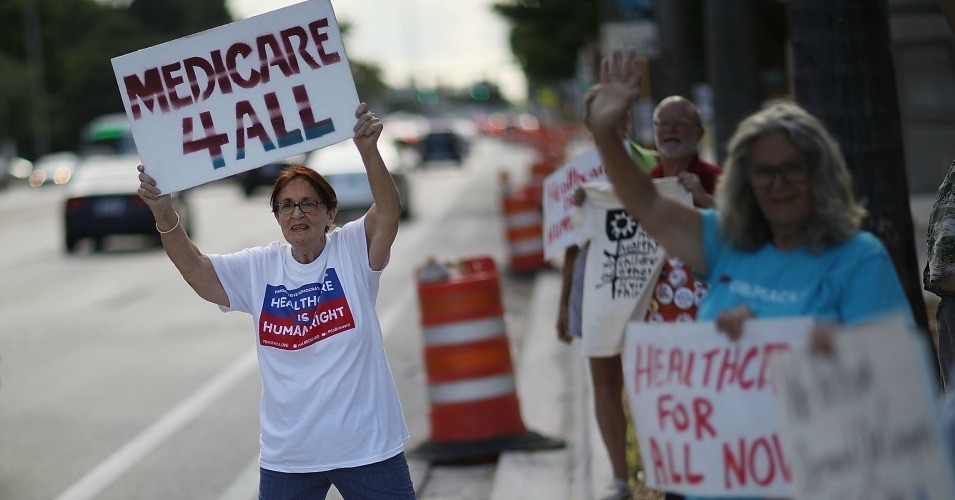 Medicare for All advocates, policy experts, and journalists pushed back strongly on Monday after an astroturf front group funded by the insurance and pharmaceutical industries misrepresented facts as part of a multi-pronged effort to convince the American public that a single-payer system would be more costly than the for-profit status quo.

On Twitter, in digital ads, and in memos to supporters and the press, the Partnership for America’s Health Care Future (PAHCF) and its allies are ramping up their nationwide campaign to fight the momentum built by Sen. Bernie Sanders (I-Vt.) and other Medicare for All advocates as proponents show how the system would be more financially feasible for middle-class families and less costly overall.

Tweeting a link to a recent Washington Post article by Jeff Stein, the Partnership for America’s Health Care Future (PAHCF) claimed that the piece showed that “Medicare-for-All would force middle-class families to pay more through massive tax hikes,” without providing the context for the statement within the article.Stein himself was among those who quickly rejected PAHCF’s summation of the article.

Source: Industry Front Group Called Out for Spreading ‘Bald-Faced Lies’ About Medicare for All Costs

The author of the article, Jeff Stein, immediately pushed back pointing out, “That’s not what the article says

And the pushback to the lie kept coming from journalists ans politicians.

Bernie Sanders policy adviser, Warren Gunnels, released the most important information, the truth about Medicare for All.

PAHCF’s misrepresentation of the Post‘s facts is just one of the strategies it’s employed. As the group launches a six-figure digital campaign, one Medicare for All advocate noted on Twitter, its partners and allies are currently spending hundreds of thousands of dolllars to spread negative claims about the proposal on social meda “at a time when Americans are dying on their couches because they can’t afford insulin.”

.@PhRMA is spending $245,600 on tweets — yes, freaking tweets — at a time when Americans are dying on their couches because they can't afford insulin. Enough is enough. #MedicareForAll https://t.co/8XThhHvNcX pic.twitter.com/Vb33xCg4ZT

The fight for Medicare for All is on.