This should be no surprise to anyone. After all, Ronald Reagan kicked off his campaign at the Neshoba County Fair near Philadelphia, Mississippi, the town associated with the murders of the three civil rights activists Chaney, Goodman, and Schwerner. And if anyone doubts that move was not calculated, he said the following in his speech.

I still believe the answer to any problem lies with the people. I believe in states’ rights. I believe in people doing as much as they can for themselves at the community level and at the private level, and I believe we’ve distorted the balance of our government today by giving powers that were never intended in the Constitution to that federal establishment.

And we all know what it means when a politician talks about states right. What is amazing to watch the system protect some like Reagan. Why is it this tape is just coming out?

It turns out Reagan and Nixon were likely more racist in private than Trump has shown us in public. It is not surprising but must necessarily be revealed. 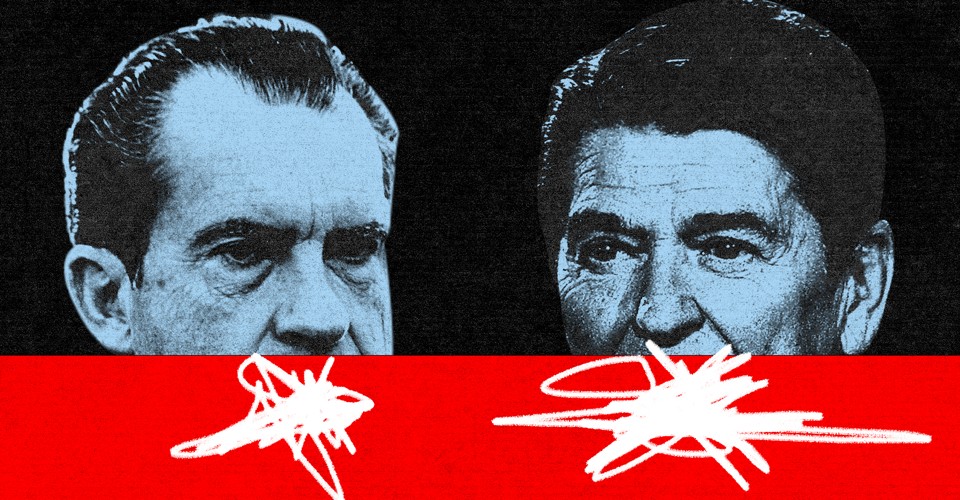 The day after the United Nations voted to recognize the People’s Republic of China, then–California Governor Ronald Reagan phoned President Richard Nixon at the White House and vented his frustration at the delegates who had sided against the United States. “Last night, I tell you, to watch that thing on television as I did,” Reagan said. “Yeah,” Nixon interjected. Reagan forged ahead with his complaint: “To see those, those monkeys from those African countries—damn them, they’re still uncomfortable wearing shoes!” Nixon gave a huge laugh.

The past month has brought presidential racism back into the headlines. This October 1971 exchange between current and future presidents is a reminder that other presidents have subscribed to the racist belief that Africans or African Americans are somehow inferior. The most novel aspect of President Donald Trump’s racist gibes isn’t that he said them, but that he said them in public.

The exchange was taped by Nixon, and then later became the responsibility of the Nixon Presidential Library, which I directed from 2007 to 2011. When the National Archives originally released the tape of this conversation, in 2000, the racist portion was apparently withheld to protect Reagan’s privacy. A court order stipulated that the tapes be reviewed chronologically; the chronological review was completed in 2013. Not until 2017 or 2018 did the National Archives begin a general rereview of the earliest Nixon tapes. Reagan’s death, in 2004, eliminated the privacy concerns. Last year, as a researcher, I requested that the conversations involving Ronald Reagan be rereviewed, and two weeks ago, the National Archives released complete versions of the October 1971 conversations involving Reagan online.

Let see if the Right will find some way to defend Lord Ronald Reagan. What do you think?