Democrats are now getting support from most Americans for the impeachment and removal of President Trump according to the latest Fox News poll. Every day, impeachment certainty continues to grow. 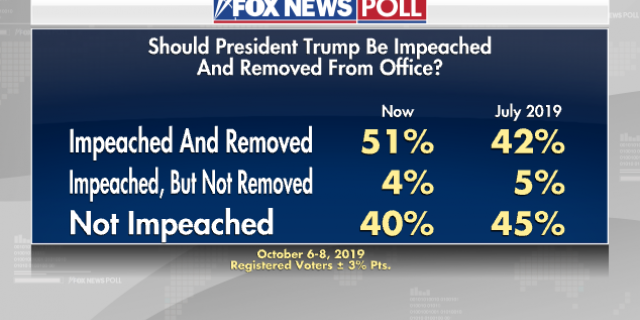 Just over half of voters want President Trump impeached and removed from office, according to a Fox News Poll released Wednesday.

Since July, support for impeachment increased among voters of all stripes: up 11 points among Democrats, 5 points among Republicans and 3 among independents. Support also went up among some of Trump’s key constituencies, including white evangelical Christians (+5 points), white men without a college degree (+8), and rural whites (+10).

Among voters in swing counties (where Hillary Clinton and Trump were within 10 points in 2016), support for impeachment increased to 52 percent, up from 42 percent in July.

A lot has happened since the July Fox poll on impeachment — namely, the launch of an impeachment inquiry in the House following allegations Trump improperly pressured Ukraine to investigate the Bidens’ dealings in that country. The 9-point increase in support for impeachment since July, however, doesn’t appear to be based solely on the latest allegations. To that point, more Democrats favor impeaching Trump (85 percent) than consider his call with Ukraine’s president an impeachable offense (76 percent). The same holds true among independents: 39 percent favor impeachment, while 30 percent describe the Ukraine call as impeachable.