It is refreshing that a mainstream media correspondent was allowed the latitude to tell the truth about America’s wealth gap. He did a great job of showing the wealth disparity and the obscene nature of the legalized theft of our plutocracy.

Just as I was about to give full praise to the report, he gave a hearing to the superwealthy in the report. Unfortunately, it detracted from the report. Check it out below. 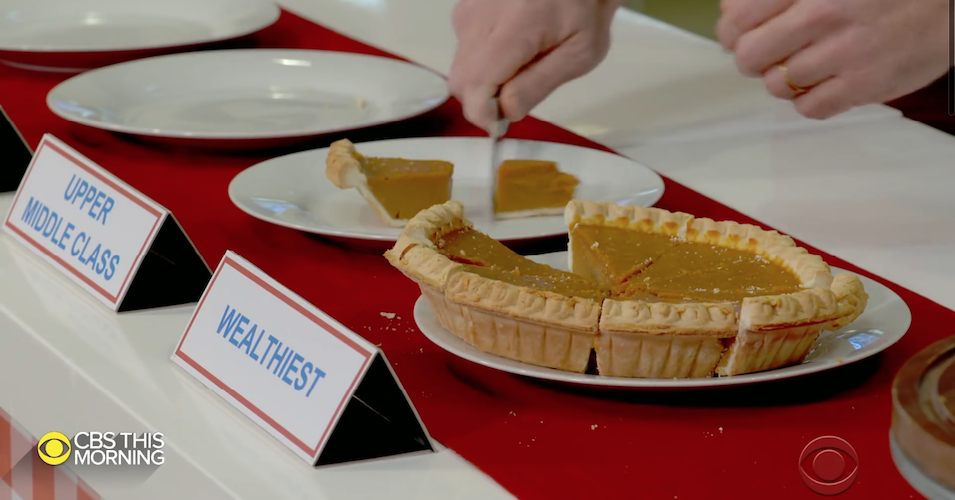 “Give this video four minutes and let’s start the revolution.”

A four minute video that aired on CBS Friday morning was praised for using slices of real pie to show the huge wealth gap in the U.S.—surprising passers-by who joined anchor Tony Dokoupil at a table set up at a mall in West Nyack, New York.

Give this video 4mins and let’s start the revolution. https://t.co/qXVFZrGDy2

In the video, Dokoupil asks passers-by to divvy a pie sliced into ten pieces onto plates for quintiles of the U.S. based on income, top 20%, next 20%, etc.

Even the most cynical participant didn’t come close to the real amount—nine pieces for the top 20% of Americans and the bill for the lowest 20%.

So why am I disappointed in the second portion of the report? We know the facts. The economic system that we have today, by design, allows a certain chosen sect the ability to machinate to extract the wealth of the masses.

The correspondent allowed the wealthy spokesperson to interject a false narrative. The wealthy person gave the impression that he had some inordinate worth that allowed his wealth. That is the furthest thing from the truth. We have ordained certain professions and financial manipulations to occur that allow a chosen few to command most of the country’s resources.

As an example. a teacher is more worthy than any stockbroker because they move knowledge forward. Yet that stockbroker will command orders of magnitude more wealth than the teacher will. The stockbroker produces nothing. The teacher’s production is ongoing and self-replicating. That teacher will never have the yacht inasmuch as their value to society is much more than a parasitic stockbroker.

In American, we value capital over humanity. Additionally, one has to be invited into the club. Too many have the false belief that if they create something they can always capitalize on their own innovation. They do not understand the corrosive nature of our economic system that relies on a mythical self-regulating maket, a farce which is supposed to decide which products will be successful and who will ultimately own it. I will go into more detail on this subject in subsequent blogs. Suffice it to say we have been indoctrinated into a self-perpetuating fraud and the results of the unsustainable system has started bearing its fruit, wealth disparity with the masses becoming indentured servants implicitly.