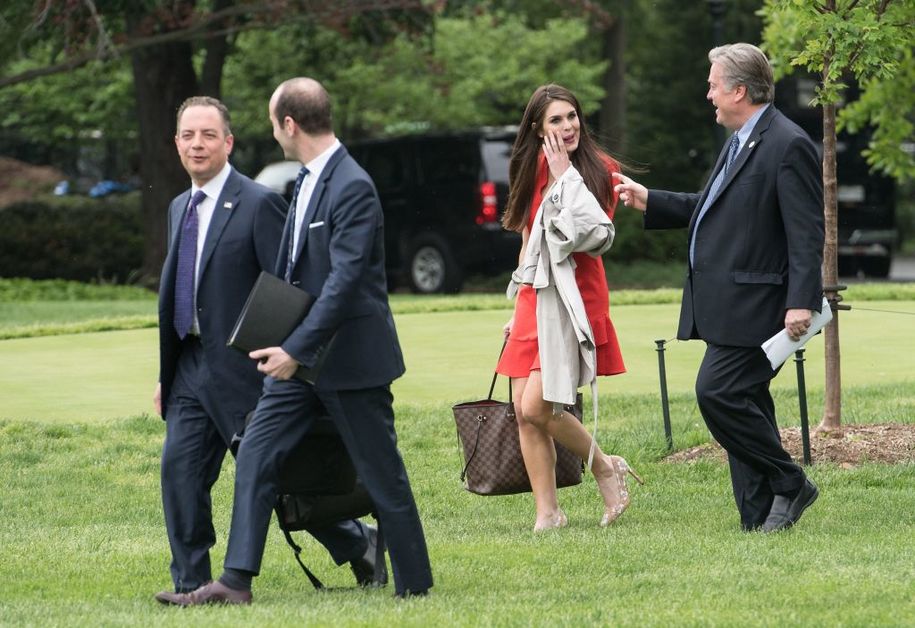 The obvious answer to “Is the Republican Party just one big scam?” is “Yes,” since the modern Republican Party and its Fox News infrastructure exists just to convince ordinary people that handing over billions more to billionaires is the Real American Way. But in a more specific sense … is it all just tacky fraud and scams all the way down?

After all, the last month has seen the New York attorney general move to disband the NRA after showing that “top executives funneled millions into their own pockets.” And Jerry Falwell Jr. went on a vacation of unspecified length after the “Christian” leader of Liberty University flashed underwear pics of the sweet life on his yacht. And now Steve Bannon has been arrested along with other leaders of the We Build The Wall organization after the funds that were sent to them turned out to be funding boats, homes, and whatever Bannon did to run up a tremendous debt. And then, of course, there’s the grifter-in-chief, whose “university” scammed thousands out of their life savings and whose “charity” paid off his golf bets.

It seems incredible that behind every Republican scam … is another scam. With the evidence that organizations right at the center of the American right are nothing more than money funnels for a handful of con artists, it’s worth asking: Is there anything at all to the right?

Across all these scams, the M.O. is the same. They start with a pitch that seems to break down into one of two categories:

These are, of course, the classic basis of scams for centuries. The solution to either of these issues is the same—send money.

With money, you can defend the right to bear arms! Or … give millions to Wayne LaPierre while hitting members with frantic messages about a critical need for cash. With money, you can be gifted the secret insight of Donald Trump’s real estate genius. Which … turns out to be being born to someone who leaves you a billion so you can spend your time womanizing and duping people who think you know something. With money, you can build that wall, even if Congress won’t! Except … instead of building a wall, you can pay off hundreds of thousands of personal debt for Steve Bannon. (And again, just how did the perpetually grubby Bannon run up, at a minimum, hundreds of thousands in personal debt?)

A quick glimpse of the boards of any of the organizations involved, or a reference to all the “institutes” and “think tanks” that provide an endless stream of talk show guests, recycled lobbyists, and Republican politicians bouncing around in the safety net shows that the same names come up over and over again. The same right-wing figures constantly vouch for each other’s importance and knowledge. The same right-wing “experts” are dredged up to give opinions on science, when they know nothing about science, or explain health care, when they have no interest in health care, or simply fill the airwaves with confusion when there’s no better strategy.

QAnon, with its worldwide conspiracy of Satan-worshipping pedophiles (not to mention its bigfoot and space Nazi offshoots), isn’t true. But it is real—as real as every other scam in the Republican universe. Right now you can absolutely bet that quite a few someones are pocketing millions over Q-related nonsense. The first of those someones would be scam-daddy Donald Trump, who on Wednesday declared that he really was saving the world from Satanic cannibals. But he certainly isn’t the only one. And when Fox News or right-wing radio asks, you can bet there will be a parade of Hoover Institute, Heritage Foundation, American Enterprise experts ready to talk to the Satanpedocannibalistic threat. Space Nazis, too.

The truth is that there is no secret knowledge. Knowledge is available to anyone. It’s just that becoming a real expert on anything requires years of study and experience. It doesn’t come in a weekend seminar, or in a ring-binder priced higher than a Midwestern home. The truth is also that things change. Places change. Institutions change. Countries change. No one can promise that they won’t. Pretending otherwise is no more than selling snake oil. And of course, Republicans are at that, too. Isn’t that right, My Pillow guy?

Maybe there was a time when the Republican Party stood for something. If so, it’s hard to locate that time. What’s absolutely clear is at the moment the Republican Party exists only as a marketing organization—a platform for launching scams. The reason that Republicans never get concerned about upholding real knowledge or expertise isn’t secret at all—those things make it more difficult to part fools from their money.