While it is inconvenient, the best way to make the country a real democracy is to stand in those lines to defeat most of the voter suppression techniques. After we win, most importantly, govern by making a difference to prevent a fallback to the undemocratic norm. 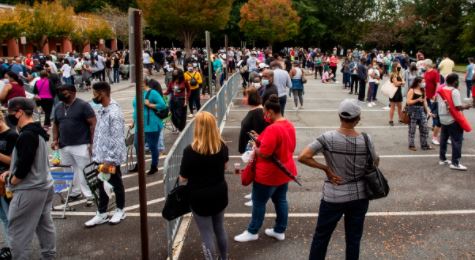 While celebrating this renewed citizen involvement in America’s political process, don’t lose sight of the bigger, and darker, picture. For decades, Americans have voted at depressingly low rates for a modern democracy. Even in a “good” year, more than one-third of all eligible voters don’t cast a ballot. In a bad year, that number can approach two-thirds.

Why are so many Americans consistently missing in action on Election Day?

For many, it’s a choice. They are disillusioned with government, or they feel their vote doesn’t matter because politicians don’t listen to them anyway.

But across the country, the group most responsible for making voting harder, if not impossible, for millions of Americans is the Republican Party. Republicans have been saying it themselves for ages. “I don’t want everybody to vote,” Paul Weyrich, a leader of the modern conservative movement, told a gathering of religious leaders in 1980. “As a matter of fact, our leverage in the elections quite candidly goes up as the voting populace goes down.”

This strategy has become a central pillar of the G.O.P. platform. It is behind the party’s relentless push for certain state laws and practices — like strict voter-identification requirements and targeted voter purges — that claim to be about preserving electoral integrity but are in fact about suppressing turnout and voting among groups that lean Democratic. …

Representative democracy works only when a large majority of people participate in choosing their representatives. That can happen only when those in power agree that voting should be as easy and widely available as possible. Yet today, one of the two major political parties is convinced it cannot win on a level playing field — and will not even try.

Source: Opinion | Why Are Republicans So Afraid of Voters? – The New York Times