The people who have allowed the lying misinformers from Fox News, OANN, and NewsMax to drive them onto the Dr. Seuss false hoopla, should read this. Willful ignorance is not an excuse for a racist stance.

Why Dr. Seuss got away with anti-Asian racism for so long 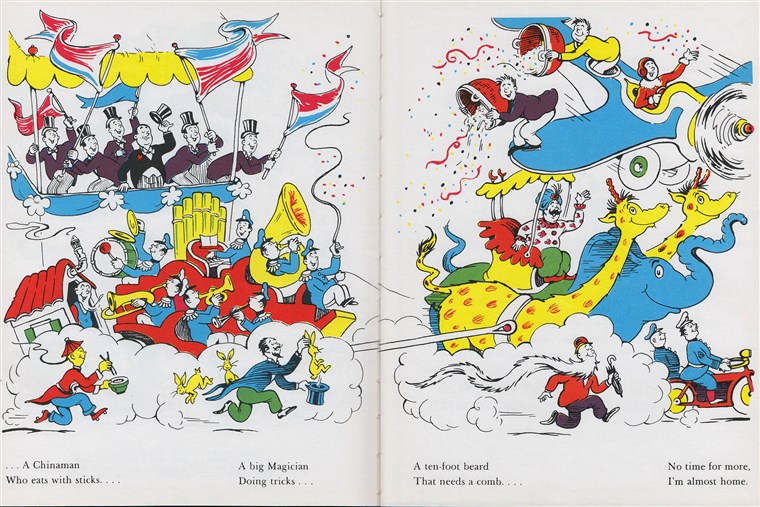 One illustration shows an Asian man with bright yellow skin, slanted eyes, a pigtail and conical hat, holding chopsticks and a bowl of rice over the words “a Chinaman who eats with sticks.” Another depicts three Asian men in wooden sandals carrying a bamboo cage on their heads with a gun-wielding white boy perched on top, next to the rhyme, “I’ll hunt in the mountains of Zomba-ma-Tant / With helpers who all wear their eyes at a slant.”

The drawings are from “And to Think That I Saw It on Mulberry Street” and “If I Ran the Zoo,” two of the six Dr. Seuss books that the company in charge of the author’s works announced last week will no longer be published because of their racist imagery, some of which includes stereotypical portrayals of Asian people.

Though Seuss’ art has been around for decades — “Mulberry Street,” his first children’s book, was published more than 80 years ago — widespread criticism of his work is relatively recent. Karen Ishizuka, chief curator at the Japanese American National Museum in Los Angeles, said Dr. Seuss' books have been able to get away with this racism for so long in part because of the persistence of anti-Asian racism in the U.S. since the 1800s.

“No doubt, the long-standing prevalence of racist Asian imagery within the larger widespread anti-Asian sentiment in the U.S. added to the delayed response to Dr. Seuss’ racism,” Ishizuka told NBC Asian America. “Generations of Americans have grown up with depictions of Asians that ranged from grotesque to comical. Especially when buffered in Seuss’ rhyming verse, his racist depictions, already normalized in U.S. society, are put forth in jest as if they are innocuous.”

Source: Why Dr. Seuss got away with anti-Asian racism for so long