These two police officers should not only be fired but prosecuted for assault. The police officers are thugs, animals that have no right on a police force. For those who wonder why we talk about #DefundThePolice, this is a constant for some of us. 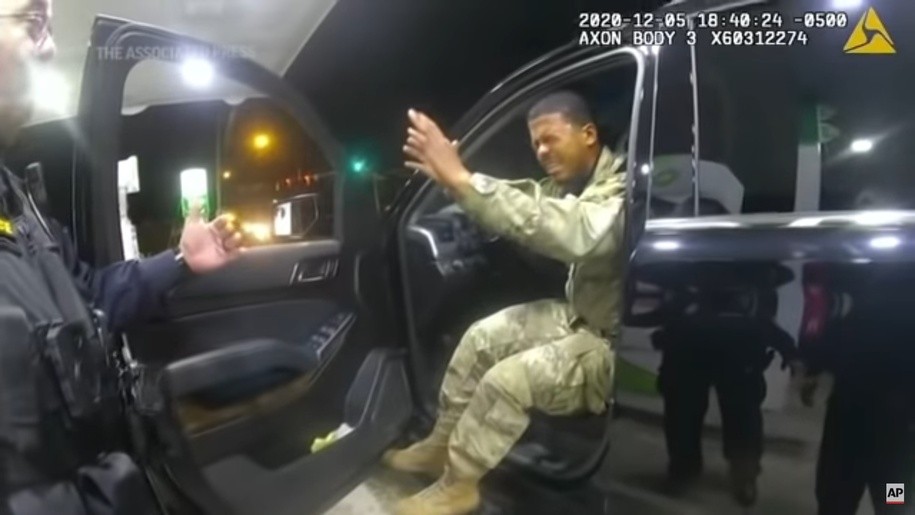 Last December, Army Lieutenant Caron Nazario was on his way home with a new SUV when the lights of a police car appeared behind him. Rather than pull over on a narrow, darkened street, he proceeded just over one minute, and less than one mile, down the road and pull into the parking lot of a gas station. There he was confronted by two police officers who proceeded to hold him at gun point, pepper spray him through the window of his vehicle, and threaten him with death.

According to the Associated Press, Windsor Police Officer Daniel Crocker radioed that he was pulling Nazario over because his vehicle lacked a license plate and had tinted windows. He also described Nazario’s one minute, low-speed drive to the parking lot as “eluding police.” This, to Crocker, justified calling the stop a “high-risk felony traffic stop.” Which justified calling for backup and approaching the car with gun drawn.

Except that the temporary tag for Nazario’s recently purchased vehicle was clearly displayed in the rear window of the SUV. If Crocker had missed it initially, it seems impossible that he would have not seen it either during that “pursuit” conducted well below the speed limit. It’s also clearly visible as the car sits under the lights of the parking lot. By the time Crocker approached Nazario’s vehicle, he had to know that, if there ever had been any justification for the stop, that reason no longer applied.

Crocker might have stepped up, explained that he had missed seeing the tag initially, and sent Nazario on his way with an apology. Instead, he was joined by a second officer, Joe Gutierrez, and together the two terrorized Lt. Nazario … while never actually filing any charges.