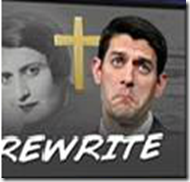 We talk about the mainstream media being liberal or always supporting President Obama or Democrats. This is so far from the truth it borders on language malpractice.

I have heard Paul Ryan mention Ayn Rand in passing. I know of the selfish ideology this Atheist Russian-American immigrant has expounded for years though I was never interested in reading her stuff. You can get a synopsis of her thought process by checking out the videos where Mike Wallace interviewed her here, here, and here.

The reason I specifically labeled her an Atheist Russian-American is because if we look at how the media and the Republicans in general has scrutinized President Obama’s associations whether it is Reverend Wright or Bill Ayers, one would think that a Catholic morality policeman like Paul Ryan would receive more scrutiny for palling around with this woman’s ideology. Yet, he stated as you can hear in Lawrence O’Donnell’s piece below that

Transcript from the Atlantic wire

Now Paul Ryan is back tracking. He is acting like the above never happened. He now says “I reject her philosophy”. How could one of the leader of the “Moral Party” really have gotten his values from an Atheist? How could he have gotten his values from a selfish self-centered person who really believes in human Darwinism? Me, Me Me. How? It is the true belief of what is left of the Republican party. Yes, they are wearing sheep clothing. However, underneath is nothing but a selfish immoral tenet that is proven by the letter of their policies.

Visit msnbc.com for breaking news, world news, and news about the economy